One of the key difficulties of teaching the American Revolution is the seeming inevitability of it all. Why did Britain even bother pursuing its bothersome colonists? After all, the patriot cause was so noble and glorious that there was surely no way that such perfidious villains as the redcoats could possibly have triumphed. And yet within that myth, there is a persistent paradox: the patriot cause is often “proven” by the victory of such an inferior force against the strongest military power in the world in the late 18th century. But for this narrative to make any sense at all, there must have been a real risk of defeat; unless Britain could realistically have defeated their colonists, why would the morality of the patriots be of any consequence whatsoever?

The dislocating effects of the war, and the uncertainty that came with it, are all too easily smoothed over or disregarded when thinking about the Revolution. That’s a particular problem in teaching any sort of course relating to the Revolution—transmitting the sense of uncertainty and of historical contingency that affected the decision-making of the Continental Congress as they unexpectedly marshaled a war effort. My traditional approach to teaching this has been to set a variety of readings highlighting the ill-discipline of the militia and the Continental Army, the rebelliousness and fractiousness of those compelled to fight, and the complicated notion of Loyalism. In future years, I’ll add Allan Kulikoff’s essay in the recent Oxford Handbook of the American Revolution to my reading list. All of which is designed to show the difficulties of mobilizing an entire continent for a war of uncertain duration and uncertain outcome.

But even then, the contingency of the war is difficult to convey. Take the haphazard nature of military preparation too far, and eventual American triumph becomes almost incomprehensible. Go too far the other way, and there’s a danger of tapping in to uncritical hagiographies of the war leadership of Washington and friends. Yet the period between 1776 and 1787 is one of the least well served in the eighteenth century, historiographically speaking—especially in popular memory of the revolution.

So this semester, I experimented with an alternative approach to challenging my students to think differently about the Revolutionary War. I got them to simulate the war effort through the use of a board game.

Washington’s War is published by GMT Games, which produces a variety of historical simulations (if you’re a fan of the Reformation, check out Here I Stand; Cold War buffs will enjoy reliving the Cold War in Twilight Struggle). The game is mostly a simulation of the military strategy of the Revolutionary War. It begins with General Howe in Boston, surrounded by Generals Washington and Greene; from then on, the action is driven by the playing of various cards that allow the movement of generals, or the placement of “political control” markers as both sides battle to gain supremacy over North America.

The game mechanism is complicated; at first, it can seem excessively so. The main “action” of the game takes place by moving generals and command units across the continent, and success is mostly determined by success on the battlefield. Each side is dealt seven cards at the start of each turn (which simulates a year in real-time); that way each side gets to plan some sort of strategy—though the alternate playing of cards means that the ability to rearrange strategy on the fly is also an essential skill. Most of the cards are “operations” cards; but there’s a variety of other cards that simulate different events during the Revolutionary War. If the British get to stir up an Iroquois uprising, they begin to gain ascendancy in New York; should Baron von Steuben arrive in America, the Continental Army becomes sufficiently disciplined to meet the British regulars on equal terms.

That, though, is only the half of it. For while victory on the battlefield is helpful, overall victory can only be achieved by gaining “political control” of a sufficient number of colonies. The Americans need control of 8 colonies (including Canada) to win; the British need to control 6. If both sides meet victory conditions, the British win by default.

And it is the placing and switching of political control markers that makes the game particularly cut-throat. The British have to build out from their existing areas of strength—south from Canada, or moving east from the southern backcountry. Americans have a much easier time of it—they can build political control almost anywhere at any time. This offsets their military disadvantage – British generals have much greater coastal mobility, thanks to the Royal Navy; their generals have a higher battle rating; American militia units have an irritating tendency to return home every winter.

As you can probably tell, the rules of the game are complicated. That’s the game’s greatest strength; it does a fantastic job of opening up the variety of possibilities of the Revolutionary War. The British have opportunities to pursue their southern strategy from a much earlier stage in the war; Americans have to work hard to persuade the French to join an alliance (though when they do, the ability to play with Lafayette and Rochambeau is a huge boon). But the complication is also a weakness. It takes a long time to explain all the rules, and getting them across to an entire class can be a challenge. I set aside a full three and a half hour class to play the game; even then, it took an hour and a half to get through the first two turns. In future, I’ll make sure to circulate the rules in advance.

That said, if the game were not so complicated, it would not be anywhere near as useful as a teaching tool. There are two features of the game that are particularly valuable. First, you never know when the game ends. The deck contains cards that announce the collapse of Lord North’s government in different years—when the government falls, the game ends. Yet that end date can change at any time—so there’s a constant and pressing need to try to drive home any advantage when you can. Second, it takes a long time for the Americans to gain the upper hand. The British send more troops to the continent in the early years of the war; on the American side, progress towards the French alliance is tortuous. Though it is easier to capture British generals, the American side has consistent difficulty in mobilizing sufficient command units to combat the British. And the game warms up pretty quickly. Getting familiar with the 7-step process for resolving battles takes time, but once people are familiar with it, the later turns can move by rapidly. 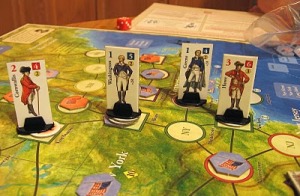 It was particularly gratifying to see students become so competitive so quickly. There were intense discussions as to when the British should evacuate Boston, whether it was worth trying to extend political control primarily through New York or through Georgia and the Carolinas, and exactly how the Americans should allocate their limited resources. The game has its ebbs and flows. The American side gained some tremendously strong hands in the early turns; but the British side gained enough.

From a purely gaming point-of-view, the resolution of the game can be a bit frustrating. If the war ends early, the British have a good chance of winning; if the war drags out, then it’s pretty hard to prevent the American side from prevailing. Of course, that means the game is a pretty accurate simulation of the mechanics of the war. And the uncertainty of the key turning points of the war is invaluable as a teaching tool. At the end of the class, students commented on how little they had appreciated the difficulties of coordinating a war effort. It drove home the importance of the French naval blockade; American inability to stop British coastal mobility was a key factor in British triumphs. And it also helped bring home how fickle political allegiance could be, i.e., that while there was a natural advantage for the Americans in the control for “hearts and minds,” that advantage was fragile and had the potential to be swiftly overturned.

So gaming in class is definitely an experiment I will repeat in the future. Encouraging a competitive spirit in class helped my students really think through the mechanics of the war, and how many different factors all fed into determining the final outcome. And the game itself is remarkably true to revolutionary history—any gripes that I have are minor and necessary to maintain the game as competitive (after all, I can read a book if I want to get a blow-by-blow account of the war—wargaming is only fun if it can change the course of history!). Most of all, it conveyed to my students the very real possibility that the “patriots” could well have ended up as “rebels.” To do that while everyone had so much fun made Washington’s War a delight to “teach.”