June 16, 2015 By The Junto Moderator in From the Archives, Guest Posts 12 Comments

Vaughn Scribner is a Visiting Assistant Professor at the University of Central Arkansas. He has published on topics ranging from early American tavern culture to the commodification of slaves in Tidewater Virginia, and also has a forthcoming article on early American mineral springs and spas. His book manuscript (in progress), Beyond Bacchus: Colonial Taverns and the Golden Age of the British Empire in America utilizes the colonial tavern space to realize how urban colonists realized the full potential of the British Empire in America from 1744 to 1765. He is also currently researching for an article on early modern conceptions of mermaids and tritons. For more info or to contact Vaughn, please visit www.vaughnscribner.com. 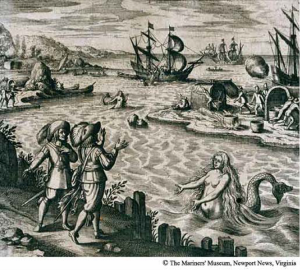 I originally planned for this piece to be a brief investigation into a number of articles that appeared in the Gentleman’s Magazine from 1750 to 1775. The articles, it must be added, consisted of in-depth analysis of mermen and mermaids. Yes, a number of early modern Britons—ranging from Cotton Mather to Benjamin Franklin—entertained, if not believed in, the existence of merfolk.[1] A deeper analysis of early modern conceptions of mermen and mermaids, my article would propose, provide a more nuanced understanding of Britons’ imperial imaginations. But that will have to wait, because my research for this piece led me down a different path that was both extremely frustrating and, ultimately, quite enlightening.

It all started with John Smith and a mermaid. Upon reading numerous peer-reviewed secondary sources, I kept coming across a quote from Smith where, after arriving in the West Indies in 1614, the intrepid explorer spied a woman swimming just off shore. Declaring the woman “by no means unattractive,” Smith began to feel the early pangs of love as his green-haired crush continued to splash about. But when she dove, Smith was horrified to realize that she was, in fact, a mermaid. This is great, I thought. John Smith! Mermaids! The problem was that I could not, for the life of me, find the original source of where this citation came from. Initially, I went to the most recently published, most scholarly piece on mermaids: Tara E. Pedersen’s 2015 volume, Mermaids and the Production of Knowledge in Early Modern England. Pedersen primarily uses Smith’s mermaid sighting to push forward her argument of sailors’ “desire to document these creatures in such vivid detail.”[2] Yet Pedersen, like numerous historians before her, fails to completely document and verify Smith’s supernatural experience. She simply cites Gwen Benwell and Arthur Waugh’s Sea Enchantress: The Tale of the Mermaid and Her Kin (New York: The Citadel Press, 1965), who—big surprise—provided no citation. Back to square one. 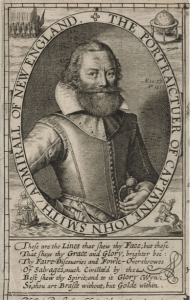 Figure 2: Detail of John Smith from an illustration in The Generall Historie of Virginia, New England, and the Summer Isles; with the names of the Adventurers, Planters, and Governours from their first beginning, Ano: 1584, to this present 1624. Engraver John Barra? Accessed via Early English Books Online.

Next, I decided to check out John Smith’s complete works—a three-volume set consisting of over 1,000 pages—and track down this elusive encounter.[3] It had to be there somewhere. I would just do the necessary grunt work. After hours of reading, and re-reading…no. It is simply not there. Smith never mentioned mermaids. Not in 1614. Not in 1615. Not at all. Frustration ensued. I hate wasting time.

I began thinking that maybe I read something wrong. I had a quote! From multiple sources! It’s there in black and white. In 1614, John Smith saw a woman:

swimming with all possible grace near the shore. The upper part of her body resembled that of a woman…she had large eyes, rather too round, a finely-shaped nose (a little too short), well-formed ears, rather too long…and her green hair imparted to her an original character by no means unattractive…[but] from below the waist the woman gave way to the fish.[4]

Surely, I thought, someone, at some time, had found this actual quote in Smith’s writings, had cited it, and everyone since had simply been a tad lazy. I just needed to track it down to the beginning—that first time someone cited Smith’s 1614 mermaid surprise. So I delved back into the primary and secondary sources, running a full text search in “Early English Books Online” (by Smith’s works, looking at multiple volumes of each) and trolling “Google Books,” “JStor,” and anything else I could get my hands on. I eventually came upon the Smith quote in Fletcher S. Bassett’s Legends and Superstitions of the Sea and of Sailors (Chicago: Belford, Clarke & Co., 1885), and Bassett actually provided a citation. Unfortunately, it was Armand Landrin’s Les Monstres Marins (Paris: Librairie Hachette, 1877), which contained a vague notation of Smith’s quote with, you guessed it, no citation. I went back to searching, growing more frustrated as another valuable day of work disintegrated before my eyes. Mermaids were feeling more fictional than ever. 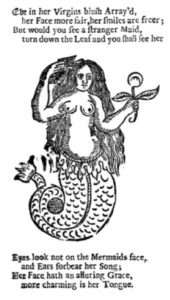 Figure 3: Detail of a Mermaid from and illustration in Anonymous, The Beginning, Progress, and End of Man (London, J. Deacon, 1689). Accessed via Early English Books Online.

Then I found something very interesting: an article, published in The Gazette of the Union, Vol. 11 (New York: Crampton and Clarke, 1849) that fell back on the same old tale of Smith and his mermaid. But this one was different. For one, this piece listed the date of Smith’s mermaid meeting as 1611. I went back and scoured anything I could find for 1611 in Smith’s writings. Nothing. But I also noticed something else. Where all the other historians had always put the mermaid sighting in quotations, this one did not. It simply stated the above-quoted passage as narrative. Interesting. Who wrote this? As I scanned up the page, I was surprised to say the least. Alexandre Dumas, author of The Three Musketeers and The Count of Monte Cristo, penned this piece. Dumas had simply added a brief (supposedly historical) story of John Smith meeting a mermaid into his fictional adventure tale for validity. After providing a few other historical mermaid encounters, Dumas launched into the story of a Frenchman’s quest to find a Dutchman who had allegedly sired four children with a mermaid.

Upon discovering this fiction embedded in fiction, I did a little (more) research and found someone else who followed the path back to Dumas. Writing for the journal Phactum in 2012, Don Nigroni also came across this inconsistency in the historical record. While it does not seem that Nigroni read the entirety of Smith’s writings, he did note “Smith evidently was not even in the region of the West Indies in 1614 or 1611.”[5] 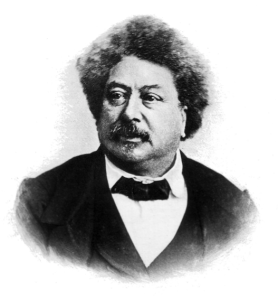 I had also thought about this fact, but supposed that the exact location of this sighting might have been lost in the record. Hence my reading (and re-reading) every word Smith ever published. Ultimately, however, Nigroni and I came to the same conclusion: Alexandre Dumas fabricated an account of Smith’s seventeenth-century mermaid sighting to include in his 1849 fictional adventure story, and, from there, the supposed event took on a life of its own and somehow became accepted by historians as reality. I suppose, given Smith’s own ability to place himself within the story of Pocahontas and John Rolfe, he would love this.[6] 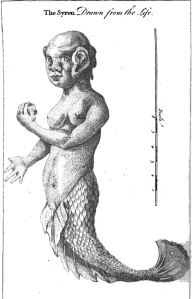 So, what have I taken from this fiasco, besides a number of ibuprofen to quell my frustration-driven headaches? First and foremost, this experience has once again reminded me of the importance of tracking down an original source. It’s often very easy to simply quote someone else when you have a hard time finding a source. But, especially in this case, finding that source is paramount for validity. Given, I’m writing on mermaids, so I have to make sure I leave no stone unturned and can back up anything I say. Solving this little puzzle (though a bit soul-robbing and maddening at times) has once again reminded me of the joys, pitfalls, and opportunities of historical research. Somehow Smith—one of history’s best storytellers—benefitted from Dumas’ fictional tale of a 1611 mermaid encounter. Smith has consequently become even more ingrained in the historical record. And while I doubt Smith’s (self-fabricated) role in the Pocahontas tale will ever recede from the American myth, hopefully his mermaid experience will sink back into the depths where it belongs.

[1] On July 6, 1716, Cotton Mather wrote to the Royal Society in England that he was “compelled now to believe the existence of a Triton; for such an one, has just been been exhibited in my own Countrey.” After providing a very in-depth account of the near capture of the triton in Brainford harbor by “three honest and credible men,” Mather exclaimed that if the recent story of a triton in his English compatriots’ papers “be Grubstreet, mine is not so. All that I have to regret is that my honest friends missed of taking my triton.” Kenneth Silverman, ed., Selected Writings of Cotton Mather (Baton Rouge: Louisiana State University Press, 1971), 210-212. In the May 6, 1736 edition of his Pennsylvania Gazette, Benjamin Franklin reported: “From Bermuda, they write, that a Sea Monster has been lately seen there, the upper part of whose Body was in the Shape and about the Bigness of a Boy of 12 Years old, with long black Hair; the lower Part resembled a Fish. He was first seen on shore, and taking to the Water, was pursu’d by People in a Boat, who intended to strike him with a Fishgig; bit approaching him, the human Likeness surpris’d them into Compassion, and they had not the Power to do it.”

[4] This quote (or at least reference to it) appears in a number of secondary sources as fact. See, for example, Armand Landrin, Les Monstres Marins (Paris: Librairie Hachette, 1877), 271; Fletcher S. Bassett, Legends and Superstitions of the Sea and of Sailors (Chicago: Belford, Clarke & Co., 1885), 195; Arthur Waugh, “The Folklore of the Merfolk,” Folklore 71 (June, 1960), 80; Gwen Benwell and Arthur Waugh, Sea Enchantress: The Tale of the Mermaid and her Kin (New York: The Citadel Press, 1965), 97; E.C.M. Parsons, et.al., An Introduction to Marine Mammal Biology and Conservation (Burlington, MA: Jones & Bartlett, 2013), 207; Boria Sax, Imaginary Animals: The Monstrous, the Wondrous and the Human (London: Reaktion Books, 2013), 185; Pedersen, Mermaids and the Production of Knowledge, 97.

[5] Don Nigroni, “Captain John Smith and the Green Mermaid,” Phactum: The Newsletter and Propaganda Organ of the Philadelphia Association for Critical Thinking (Nov./Dec., 2012), 18.