Today’s guest post is by Mairin Odle, a PhD Candidate in Atlantic History at New York University. In 2013-2014, she was a Sawyer Dissertation Fellow at the McNeil Center for Early American Studies. Her research investigates cross-cultural body modifications in early America. 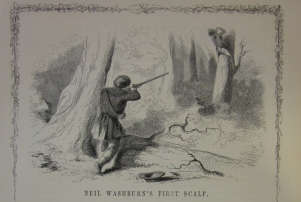 As many in the D.C. area can tell you, the Washington NFL franchise—known to thousands of its fans as the Redskins—lost each of the four games they played last month. Is it possible that players were distracted by the protests and controversy over the team’s nickname? The timing is interesting: after all, November was Native American Heritage Month.

Activists have urged the team to change its name for decades, arguing that redskin is an obvious and offensive racial slur. The team’s owner, Dan Snyder, has so far refused, claiming that the term instead honors both Native peoples and their traditions. This summer, sportswriter Baxter Holmes wrote two pieces for Esquire arguing that the team should change its name because, he claimed, the term redskin refers to bounties on Native American scalps issued throughout the colonial period (and then by numerous states well into the nineteenth century). Members of his Cherokee and Choctaw family, he wrote, had traditionally linked the word to the 1755 bounty offered by Massachusetts Bay for Penobscot scalps—the Phips Proclamation, named for Spencer Phips, the colony’s acting governor and issuer of the order. Many other name-change advocates have made similar arguments based on etymological origins, explicitly connecting the term to the state-organized violence of a market for dismembered body parts.

But those resisting a name change pushed back, pointing out (correctly) that the Phips Proclamation itself makes no reference to redskins. Some have insisted that, as the team’s trademark attorney put it, “what our word means” can only be understood in the linguistic context of the franchise’s name: i.e., that the only history that matters is the 81-year history of a football team.

More troublingly, a handful of team supporters have suggested that the very history referenced by Holmes and others—of violence against Native people and state-authorized payments for their deaths—couldn’t be real.

There are a couple of problems with building the argument for changing the team name upon the origin of the term. The first is that the ultimate derivation of the word is not, in all likelihood, based on bounty proclamations. As linguist Ives Goddard and historian Nancy Shoemaker have both shown, references to “red skin” emerged instead as self-identifying language used by Native peoples of the Mississippi River valley and Southeast during the eighteenth century. Such terms provided a means of distinguishing themselves from people of European or African descent. ‘Redskin’—now treated as a single word—subsequently appeared in English in the late eighteenth century as a literal translation of French-language references (“peaux Rouges”) made by Illinois Country Natives to describe themselves.

Second, and more important, a focus on the origin of the word distracts from a crucial distinction: not where the term began, but where it stands now. As linguist Geoffrey Nunberg points out, the nineteenth and early twentieth centuries saw increasing use of the term by white settlers as a derogatory catch-all, one that dismissed subtleties of tribal affiliation, community, and name. Any Indian (and, by extension, every Indian) could be reduced to nothing more than the color of his or her skin.

Redskin may not directly derive from scalp bounties, but that does not mean that scalp bounties were not both very real and very widespread. It also does not mean that contemporary people are wrong to draw associations between, on the one hand, a term that asserts the primacy of skin over all other identities, and on the other, a history of violence against Native Americans that treated them as objects and commodified their body parts.

Insistence by the nickname’s supporters that, because redskin was not a derogatory slur in eighteenth-century America, Redskins cannot be one now, is simply post-hoc rationalization. What is more significant, and more disturbing, is the insistence by a vocal minority that the history of scalp bounties was insignificant, or even non-existent. (Some have even gone so far as to claim that documents like the Phips Proclamation are fabrications.) Such individuals may be outliers, but their denialism fits with a long legacy of dismissing both Native history and Native experiences.[1]

There is no doubt that bounties were real and that they were widely deployed throughout early America. Scalp bounties made their initial appearance in the legislation of various English colonies in the 1670s, although exchanges of gifts for enemy body parts were present from the earliest moments of conflict between Natives and colonists.[2] By the last decades of the seventeenth century, colonial governments offered formal bounties for Native American scalps with increasing frequency, and with carefully delineated award scales and procedures for reimbursement. Scalp bounties used the possibility of reward explicitly to secure volunteers for the military work of English colonization, and were thus a key element of war policy.

In Massachusetts Bay, for example, the colony’s response to every conflict with Native Americans following King Philip’s War was to issue bounties. More than fifteen were issued during the two-decade period between 1690-1710 alone. By the first decade of the eighteenth century, bounties typically differentiated awards for scalps by categories of gender and age.[3] Officials usually prioritized the scalps of males over twelve, although determining the age and gender of an object like a scalp remained a significant logistical problem for colonial governments. Yet even as such distinctions were introduced, bounty acts became increasingly unclear about whom exactly they targeted beyond broad categories of “Indian enemy or rebel.” But the vagueness of such language could be tactical: loose definitions policed all Natives, allies and enemies alike, with the ever-present threat of violence.

The indifference to specifics, to complexity, and to humanity embedded in the language of bounty acts still echoes in the unwillingness of some modern Americans to acknowledge the violence of the continent’s history. Keeping the conversation mired in formal etymology allows those advocating for stasis to sidestep the realities of that history: the facts of scalp bounties, the facts of intense and systematic violence against Native Americans, and the fact that the term redskin has now acquired a connotation of aggressive insult. As Nunberg wrote, the team name represents nothing of real Native American lives: “‘redskin’ conjures up a purely mythical race…burlesques of the war bonnet savages of the movies.” To refer to someone, or to oneself, as having red skin is quite different than calling them a redskin—a word that substitutes a part for a whole, and subsumes the entirety of their character into one facet of their physical appearance.

In its casual dismissal of specificity, the word summons up an entire history of violence, one which treated Native people as valuable only when they were viewed as interchangeable objects. Of course, the Washington team is familiar with valuable objects; Forbes recently valued the team at over 2.4 billion dollars. The entire Bureau of Indian Affairs, by comparison, has an annual budget of approximately 2.6 billion dollars.

Perhaps it’s time for the Washington franchise to ask, ‘what’s in a name?’ and to find an answer more thoughtful than “tradition,” and one that’s deeper than money.

[1] Ned Blackhawk in Violence Over the Land: Indians and Empires in the Early American West (Cambridge: Harvard University Press, 2006) puts it this way: “Indigenous peoples remain fixed within static definitions of culture, imprisoned in notions of essentialism. As a result of the pernicious, self-perpetuating logic of timelessness on the one hand, and of primitivism on the other, these groups remain outside of history, and any changes or adaptations they have made become only further evidence of their demise.”(4) Native interpretations and accounts of historical events are ignored or elided, while change over time in Native communities, the very basis of historicity, is taken as proof that they are no longer “real Indians.”

[3] For one such example, see the 1706 bounty offer for any male “Indian enemy or rebel” over twelve years old: The Acts and Resolves, Public and Private, of the Province of the Massachusetts Bay, 21 vols. (Boston: Wright & Potter, 1869), 1: 594-5. I discuss the shifting terms of colonial bounty legislation at greater length in my dissertation.