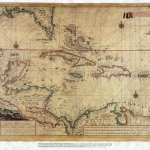 On a dark and stormy night in July of 1729, a vicious murder occurred in the port city of Veracruz. Okay, I don’t actually know if it was stormy on that night, nor was the murder particularly vicious but, for narrative effect, bear with me. On the evening in question, a Dominican priest accompanied by an entourage of the town’s residents walked to the trading factory of the British South Sea Company to pay the factors a visit. According to Inquisition records, as the group approached the factory, shots were fired from within the building, and the Dominican priest fell dead. The man who fired the fatal shots—William Booth[1]—claimed that he had not recognized the priest and fired in self-defense. As Booth argued, marauders frequently roamed the streets after dark and he assumed the visitors wanted to rob him. Booth was sentenced to five years hard labor in North Africa—a veritable death sentence—and the South Sea Company’s factory in Veracruz barely survived the incident, which reached the diplomatic tables of Europe.[2]

As someone who works on projects of inter-imperial and comparative history in the seventeenth- and eighteenth-century Caribbean, my archival trips frequently turn up narratives such as this one. Vignettes like that of the unfortunate William Booth earn me “cool points” when I discuss my research with colleagues, but they are often difficult to fit into bigger narratives either in my own scholarship or in the classroom. As Matthew Mulcahy points out in his new book, Hubs of Empire: The Southeastern Lowcountry and British Caribbean, the history of the greater Caribbean is often, “too different, too distinct to fit into larger narratives concerning ‘the thirteen colonies’ as anything other than exceptions.”[3] While positioning the British Caribbean into the wider narrative of early American history fits as well as a round peg into a square hole, add to that the extra layer of historical moments in which multiple empires crossed paths and you have what historian Eliga H. Gould famously calls “entangled history.”[4]

For a young graduate student, I read Gould’s essay seven years ago like manna sent from above. For Gould, the narrative of early American history makes sense when viewed as a “hemispheric system or community,” which includes non-Anglo-American territories and non-European subjects.[5] For a new project, I recently dusted off Gould’s essay and realized that it accomplishes much more than I’d recognized before. (And, this is where things get weird, so bear with me, again). For physicists, classical mechanics forms the basis for any entry level class—from Einstein’s theory of relativity to Newton and gravity—classical mechanics consists of the physical laws used to describe motion in the universe. But, as physicist Brian Greene explains, many of these laws break down at the subatomic level. In other words, get really, really close to the thing being studied and it doesn’t seem to follow the laws of nature put forth in classical mechanics. As more advanced technology allowed physicists to see things smaller and smaller, theoretical physicists developed a second set of laws known as quantum mechanics. Yet, physicists had a difficult time reconciling the two sets of laws—until the advent of string theory, that is. Without going into too much detail (most of which I don’t understand), string theory attempts to explain all of the observable phenomena in the universe. In other words, it is a vision of the universe that can explain two different, and sometimes contradictory, sets of laws.

To me, Gould’s “entangled history” is a kind of string theory for the study of early America. By proclaiming almost impossible any attempt, “to write the history of either Britain’s Atlantic empire or the early United States as the history of self-sufficient nations with full mastery over their own destiny,” Gould’s essay elucidates the ways in which—when historians get close to the ground in early America—events and actions start to make less sense unless one considers the entangled relationship between Britain’s and Spain’s Atlantic empires.[6] More importantly, seeing the essential nature of this entangled history makes clear that Mulcahy’s Greater Caribbean, or my “cool” vignettes, were not exceptions to the standard narrative of the thirteen seaboard colonies, but essential for understanding the wider context of British North America. Since Gould’s essay, scholars have—intentionally or not—taken up the cause of writing narratives of entanglement. From Kristen Block’s Ordinary Lives in the Early Caribbean to Carla Gardina Pestana’s Protestant Empire, there are more examples now of scholarship that takes as a given the influential nature of inter-imperial relationships.

But, like quantum physics with classical mechanics, I wonder how effectively the narrative of Britain’s mainland colonies and Gould’s notion of entangled history have been reconciled in the classroom, in textbooks, and in the ways in which historians of early American think about the field. I, for one, have never lectured about William Booth and the murder in Veracruz, despite what I think it could tell students about eighteenth-century trade companies, religious tensions, and Anglo-American history in the moment before the outbreak of the War of Jenkins’s Ear. In a way, I’m not sure how to make it fit into an early American history survey. So, perhaps, I could open this up to the wider Junto community and ask: how have scholars out there reconciled a desire to present complexity, or entanglements, with the need to present a digestible narrative?

[1] No relation that I can find to the other Booth, also famous in American history for murder.