Today we’re featuring an interview with Adrian Miller, author of The President’s Kitchen Cabinet: The Story of the African Americans Who Have Fed Our First Families, from the Washingtons to the Obamas. Miller is a food writer, attorney and certified barbecue judge who lives in Denver, CO. He is currently the executive director of the Colorado Council of Churches and, as such, is the first African American and the first layperson to hold that position. Miller previously served as a special assistant to President Bill Clinton and a senior policy analyst for Colorado governor Bill Ritter Jr. He has also been a board member of the Southern Foodways Alliance. Miller’s first book, Soul Food: The Surprising Story of an American Cuisine, One Plate at a Time won the James Beard Foundation Award for Scholarship and Reference in 2014.

JUNTO: Your previous work was in policy, rather than in food service, and from there moved into the history of food and eating. What would you say is the relationship between food and policymaking, both for you personally, and in the histories you write?

ADRIAN MILLER: In different ways, food and policymaking are about bringing people together. With food, it’s often in a hospitality context—you’re welcoming someone to your table to get to know them and have a good time. This can either begin or maintain a relationship with someone else. Ultimately, it’s about making a connection, and sharing a meal helps facilitate such connection. Policymaking does the same thing, but in a different way. Good policymaking is evidenced by sound approach to addressing some social concern, issue or problem. The best policymaking happens when many different constituencies come to a table to advocate for a social, realizing that the best result may involve compromise. In the histories I write, I use food to unveil the experiences of African Americans in a variety of contexts. My hope is that people outside of the African American community will be more empathetic to our experience, and may realize that we have far more in common than what divides us.

JUNTO: A lot of work in food history is interested in questions of power, and the president you write about often enjoyed a great deal of power. Do you think there were moments when presidents had to cede power when it came to matters of health and diet? If so, what do you think this says about race and gender relationships in the White House? 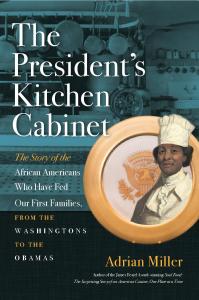 MILLER: U.S. presidents have routinely ceded power to their spouse, the presidential physician, and their cooks when it came to food matters. That was the modus operandi mainly because most of our presidents have entered the office as older people who typically have had health issues. The added stress in the job doesn’t help either. This does strongly speak to gender role expectations. For much of our nation’s history, First Ladies were expected to the model housewife when it came to cooking, entertaining, raising children and supporting their husband. Those expectations have changed in the past couple of decades, but there is still a lot of cultural inertia for the notion of a model housewife. We’re fine with First Ladies delving into other areas as long as their pet project stays within the historical bounds of femininity. This partially explains of all the criticism that Hillary Clinton got as First Lady when she was going to take a leading role in developing health care policy. There are limits. When First Lady Michelle Obama planted a White House garden and encouraged healthy eating in public schools—activities well within the realm of traditional housewife activities—she was heavily criticized by some segments of our society for being too intrusive in children’s lives. I believe that much of this had to do with her being an African American. Most of the White House cooks throughout history have been African American, so it was often their responsibility to make sure the president ate a healthy diet. Yet, these cooks were often in an impossible situation. The First Lady and the presidential physician would order the cooks to put the president on a strict diet, but the president would often complain saying he wanted comfort food or junk food. Guess who usually won?

JUNTO: You explain in preliminary interviews that the historical recipes in this book come from a mix of sources, such as cookbooks, newspaper articles, and memoirs of presidential staffers. What was your method of testing recipes/reworking them for the book?

MILLER: When it comes to historical recipes, I had professional recipe testers re-work them. I also had my friends who like to cook go through the recipes because that is the demographic that is mostly likely to cook from my book.

JUNTO: You comment that at various times, gifts have poured into the White House. Were there any examples in your research when you think previous presidents might have violated the Emoluments Clause?

MILLER: For obvious reasons, I’ll stick to commenting on previous administrations. I haven’t seen any examples of food or gifts presented to a president that violated the Emoluments Clause. In the late 1920s, a division of protocol was created within the U.S. State Department to coordinate the exchange of gifts between a president and foreign leaders. One recent, memorable food gift happened when President George W. Bush once received 300 pounds of raw lamb from Argentina.

JUNTO: During some moments in the book, the quantity of food served seems to matter more than the quality of it. Could you say a bit more about instances where amounts of food mattered more than taste?

MILLER: Ha! I don’t remember writing that, but one time that I can think that was the case was during the time of President Franklin D. Roosevelt. The White House Kitchen had a horrible reputation. This was due to a combination of factors: rationing of food during World War II, First Lady Eleanor Roosevelt’s non-interest in cooking, and the alleged limited cooking skills of White House housekeeper Henrietta Nesbitt.

JUNTO: The use of space seems to matter a lot in cooking for presidents. You write that the White House was modeled on a plantation big house, and you describe black cooks trapped in the White House basement, where they were prone to disease. Do you think the changing space of the president’s kitchen has mattered? And if so, how?

MILLER: Yes, changes in the kitchen space have made a difference. When the kitchen was in its original location, the president’s guests could actually look down into the basement kitchen as they waited to enter the White House. During the Lincoln administration, Mary Todd Lincoln had the kitchen moved to its current location in the northwest corner of the basement. That space had more windows and brought more natural light into the kitchen. Another interesting change in space came when the White House was renovated in the early 1950s. A small, private dining space for the president’s senior staff was added to the first floor of the West Wing. The space is more commonly known as the “White House Mess.” Don’t read into that too much. “Mess” is an old Navy term for an eating space, and for many reasons, U.S. Navy cooks handle food service for that space. The last change I’ll note happened in the early 1960s. First Lady Jacqueline Kennedy tired of dining with her family in the State Dining Room. She felt that space was too big, and she desired something more intimate. So, she changed Margaret Truman’s former bedroom on the second floor into a small kitchen and family dining room.