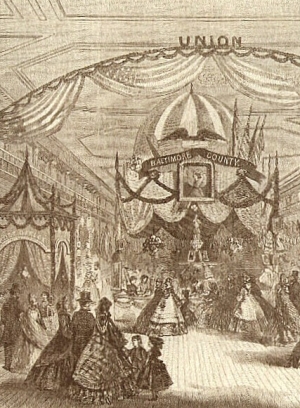 “We all declare for liberty,” Abraham Lincoln remarked in 1864, “but in using the same word we do not all mean the same thing.” That word gets thrown around a lot when we talk about, and especially when we commemorate, the early American republic. Since I started my job two years ago, I’ve been teaching a course on “the meaning of liberty” from Revolution to Civil War. In this post I want to reflect on the process of designing, teaching, and redesigning that course—a process of thinking through American “liberty” with my twenty-first century British students in mind.

The truth is, I find it hard even to begin thinking collectively about freedom. Our starting point is unfreedom. It was the same for Thomas Jefferson. His Declaration of Independence gives meaning to liberty by listing its violations. When we read David Walker, William Lloyd Garrison, Frederick Douglass, and Harriet Jacobs in my class, we try to glimpse freedom by looking deep into its absence. But it’s too easy for students to assume that because slavery has been abolished in America, the problem of liberty has already been solved. Spend too long pondering slavery, and just about anything else starts to look like liberty.

There were critics of abolitionists who tried to raise the same problem. In my class, we read William West’s series of letters to The Liberator, describing “wages slavery” as a system of dependence, abjection, and poverty which West calls “worse” than chattel slavery. It is wage slavery that can most truly claim to be the “sum of all evils,” West writes, because it is only this variety of slavery that hypocritically appropriates “the name of liberty.” We read West critically, of course. But when I ask my students if they ever felt like their boss was a tyrant, that’s when they begin to understand that freedom is a problem of the present, not just of the nineteenth century.

It’s the curse of such a topic—the meaning of freedom in American history!—to be so deeply bound up with progress. Didn’t things just keep on getting better; sometimes faster, perhaps, and sometimes more slowly, but basically, better? We read Judith Sargent Murray in the second week, then Sarah Grimké in the seventh, the Seneca Falls declaration and Lucretia Mott in the tenth. One of my students noted how depressing it is to see the same good arguments repeated, periodically, over sixty years of alleged progress. The way we raise and teach our children, the way they imbibe the ideology infused in their surroundings—as those women powerfully described—is an unfreedom none too easily abolished.

But next year I will spend longer with some of the writers that my students this year liked the least—I just marked all their essays, and not one of them wrote on the Transcendentalists. It is one thing to grasp the unfreedom of slaves, women, and even wage workers in nineteenth-century America. Emerson and Thoreau make a different kind of challenge, one that I think cuts even more deeply to the problem of contemporary freedom and unfreedom. Perhaps they write too beautifully for what they’re really saying to be taken seriously, when put alongside the righteous fury of that Frederick Douglass speech or the plain-spoken wisdom of William Manning’s Key of Liberty.

I am no Lincoln scholar, but it seems to me that he was being wry with his Baltimore audience in 1864—for they knew very well that their version of liberty was the true one, and victorious. That speech, less than a page long, has more of freedom in it than the ten thousand word disquisition, “What Is Liberty?” that Albert Blesdoe published in his Southern Review five years later.  Still, I’m glad I made my students read Blesdoe too. They need to know that even after Union victory, there were those who wrote in defence of slavery, and did so under the cover of philosophy and liberty. They need to be able to recognise that kind of thinking when they read it today, and tomorrow, and next year.