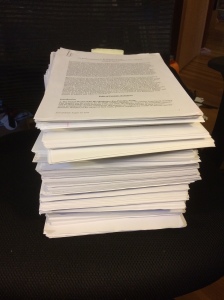 Some of the chapter drafts I’ve found in my office.

As I spent the final months of 2018 completing the copy editing and page proof process for my book, I found myself surprised at how easy it was to say goodbye to the book. Before last summer, I assumed I would find myself despondent at the thought of never being able to work on it again, that I would worry about finding typos or other errors, that I wouldn’t be able to make final decisions on anything. But other than the stress of actually going through the manuscript in a short period of time, I’ve instead felt excitement to check items off the final to-do list.

At the same time, knowing that I’m at the end of a two-decade-long process (seriously) has me reflecting on the process that got me here. My book started as an undergraduate research paper in a seminar on communications in early America, which means I have many, many memories of research and writing.[1] This last round of book edits thus took on the character of a “This Is Your Life” episode as various passages would trigger memories of where I was when I wrote or researched. Or I would recall comments I’d received when I presented work (sometimes advice that I took, other times not). And I’ve learned not to worry too much about the errors, not least because I was still finding errors in the page proofs. (I misspelled Philadelphia—twice!—which made for a good object lesson about editing and revision with my students.)

The copy editing process overall is not the most exciting parts of writing a book. Over the course of several weeks, I reviewed the copy editor’s suggestions to improve my manuscript in ways both large and small. He made some revisions that I welcomed, and offered others that are painful to me personally, even as I see the wisdom behind them. One sentence in particular that the copy editor proposed deleting triggered a very strong memory of how it came into the manuscript in the first place. I agreed with the editor, which means you won’t be able to read the sentence in my book, so let me share it with you here:

Printers in colonial America most frequently found themselves roughly at the middle of society.

At first glance the sentence doesn’t seem like one that would stand out for me. It’s a relatively banal introductory sentence which appeared at the beginning of a section of the first chapter that discussed the social background of printers. But it took me literally years to write it. I distinctly recall laboring over the version of the sentence that I included in the first chapter of my dissertation, and the conversation with members of my committee on how exactly to phrase it. (This includes mental images of sitting in the office of both of my advisors talking about the sentence.)[2] How could one accurately describe the class status of printers as a group? I wanted to be able to do that in a clear way, to place them on the socioeconomic spectrum somewhere between the poorest laborers and artisans and the upper crust of merchants, lawyers, and landowners. But I also wanted to give a nod to the mushiness of that characterization. As I discuss in my book, printers actually landed across a wide swath of the socioeconomic spectrum. Some of them were truly poor, no better off as tradesmen and artisans than George Robert Twelves Hewes was as a shoemaker. On the other end, a few became relatively well-to-do, and not just Benjamin Franklin. I wanted this summary sentence, appearing toward the beginning of a chapter the outlines the contours of the printing trade, to capture all of that. My committee wanted that, too.

And it’s getting cut. I saw that in the copy edits and my heart sank. I spent so much time working on that sentence! Think about the intellectual work that went into that one sentence, to try to encapsulate a broad range of people into a single category. Doesn’t that count for something?

As it turns out, no, it does not. Because I immediately realized that the copy editor is completely right. That sentence has to go, because it actually says very little at all. In attempting to generalize and capture the essence of the class status of printers, I wrote a sentence that muddles more than it explains. The rest of the paragraph takes care of the complexity that I’m trying to capture, and so this summary statement that isn’t really a summary no longer makes sense. On the bright side, the discussions I undertook and the editing I did over various iterations of the chapter improved my clarity in the rest of that paragraph (and, dare I say, the chapter) so that I don’t need to offer a glib summary statement.

I expected to find it difficult to let go of the book, and instead I’m excited to have it done. I did not expect to have my life—or least mostly the professional side of it—flash before me as I reviewed everything for the final time. With that book coming out in a few months, all of that work is now behind me. Except for the finding of mistakes, which I’m sure that will continue after I see a bound copy of the book.

[1] Fun trivia: mine is not the only book that can trace its lineage back to a paper in that particular course. Hello to the other author if you’re reading!

[2] For the die-hard editing fanatics, here’s the version from chapter 1 of my dissertation: “Printers in colonial America were for the most part of middling status.” (p. 23)