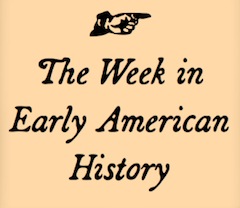 It’s been another marvelous week for early American history. First, we saw the one hundred fiftieth anniversary of the Gettysburg Address. As John Fea notes, the exact wording of the speech has been causing trouble; Barack Obama has been accused of refusing to read a crucial passage. The AP’s Allen G. Breed investigated the various drafts of the speech and, with help from Martin P. Johnson, discussed their significance to American journalism. On SNL, though, Mr. Jebediah Atkinson had harsh words to say about the address.