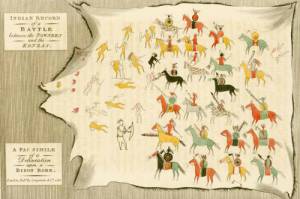 Edwin James, “An Account of an Expedition from Pittsburgh to the Rocky Mountains, Performed in the Years 1819, 1820.”

Still searching for new sources to use in your survey, or maybe a new midwinter project to research? The Wisconsin Historical Society’s American Journeys site is a hub for 18,000 pages’ worth of diaries, eyewitness accounts, manuscripts, images, and travel narratives of exploration and settlement in North America– all set in a timeline that stretches from the Vikings to the Rockies. Michael Edmonds, Head of Digital Collections & Web Services in the Library-Archives Division of WHS, told us how the site has transformed the research process, on both sides of the library desk.

JUNTO: Can you describe the scope and content of the collection? How did you select the documents, and what do you still hope to add to American Journeys?

EDMONDS: Towards the end of 2000, when the Web was young, I had the idea of digitizing eyewitness accounts from all the earliest voyages and expeditions to North America, and to have them ready for the bicentennial of Lewis and Clark in 2004. I wrote a National Leadership Grant to the IMLS, and they funded it in the fall of 2002. Our main idea was to put primary sources in front of high school students by coupling the digital collection with National History Day – we’d build the collection, and they’d take it into thousands of classrooms with a study guide and lesson plan. That worked reasonably well, but American Journeys (AJ) also appealed to a huge audience that was not in high school – local historians, undergraduates, travel buffs, dissertators, and other folks. This was long before Google Books and the Internet Archive had put such texts within easy reach of the masses.As for the selection, I drew up a list of possible sources from standard bibliographies and textbooks, and sent it to a couple dozen historians specializing in early American exploration. They graciously steered me toward the most important works and suggested some others I’d overlooked. I also wanted to balance the selection by ethnicity (include American Indian voices wherever possible, as well as European expeditions that introductory texts often gloss over, such as the Russians in the Pacific Northwest or the Swedish colonists in New Jersey). I was also aiming for geographic distribution and tried to include records of first European contact with indigenous peoples from Hawaii to Virginia, and Texas to Maine. We won’t be adding any more material to AJ since all the important printed sources are online elsewhere now. The new Digital Public Library of America, which launches in April, will soon create one-stop shopping for all digital books and manuscripts.

JUNTO: Are there a few documents that Junto readers should check out right now as a way of exploring the site?

EDMONDS: Cabeza de Vaca is a fun read and comparatively little known. One of my personal favorites is the memoir of the first missionary to reach the Great Lakes, Gabriel Sagard – he has a sweet personality, and was caught between the rise of science and medieval faith in his reactions to America. Another fascinating but obscure one is the voyage of La Perouse , who thought it ridiculous that Europeans should ceremoniously plant flags and claim land as their own, when it obviously belonged to the people living there; he met a tragic end. Newcomers to the site might also start on the “highlights” page, where they’ll find links to specific passages in the primary sources that describe famous events (click on the date).

JUNTO: Increasingly, accessibility to digital sources is changing the research experience for both librarian and reader. What are some of the challenges and opportunities that you faced in digitizing such massive amounts of sources? What do researchers have to say about using it?

EDMONDS: There’s no trick to the digitizing; it’s almost as easy as photocopying. The challenge lies in making the information in the scanned materials easily accessible. What good are 10,000 random .jpg files? Keyword access generated by the computer (OCR) is the most common way to provide access, but it’s totally unsatisfactory (by itself) for historical documents like these. First, the accuracy rate is painfully low, especially for books printed before the 19th century with their antiquated orthography. Second, writers in early centuries didn’t use the same terms we do today, so searching the full text for words that come into our minds is problematic – those words didn’t come into the minds of a ship captain or a diarist in 1610 or 1770.

To compensate for this, we had a small army of part-time grad students manually tag every page of AJ using a controlled subject vocabulary. That’s why serious researchers like Junto readers can do an advanced search, choose a combination of terms, and find all accounts of Native American jewelry in the Southeastern states before 1750 (or whatever). This makes available all sorts of information that was previously unobtainable. It has also spawned a bunch of seminar papers in library and information studies graduate programs around the country, as budding professionals look at AJ from a resource discovery perspective.

Another problem is the sheer amount of information. Sending an undergraduate writing a five-page paper to a collection of 20,000 scanned pages is like taking a hungry person to a mega-supermarket. They need a sandwich, not 55 kinds of pickles. So here at the Wisconsin Historical Society we try to curate or mediate our digital collections. Hence AJ’s little background essays and reference maps.

Researchers rarely say anything about it anymore even though several hundred people use the site each day. I take this as a sign of success – it must be working for them. In 2004 I gave a workshop about AJ in Hawaii for secondary school teachers. During a break one of them came up to me and told me about using Capt. Cook and other primary sources in her classroom. “We used to have to fly to Honolulu and put on white gloves to see these books,” she told me. “Thank you so much for giving us our history back!” I had to hold back the tears – this is what digital libraries are for!

JUNTO: What’s next for WHS on the digital front? Can you offer a few reflections on how digital research is changing the way that institutions like WHS think about the mission of collecting, preserving, and sharing primary source material?

EDMONDS: When Google Books began, we decided to focus our efforts primarily on manuscripts and unpublished material that’s unlikely to find its way into mass digitization efforts. At the moment, we’re halfway through building a collection of Civil Rights manuscripts documenting 1964’s Mississippi Freedom Summer. It includes more than 20,000 pages of letters, diaries, minutes of meetings, press releases, audio recordings, photographs, and similar primary sources about that turning point in American history. The collection will reveal the experiences not just of the white volunteers who went south but also of black host families, staff of SNCC and CORE, local black activisits, white citizens’ councils and the Klan, government officials, the media, and more. Many of the people involved in those events went on to lead the women’s movement, the anti-war movement, the gay rights movement, the immigrants’ rights movement, and of course the continuing struggle for civil rights. That project is described here, if you want to know more.