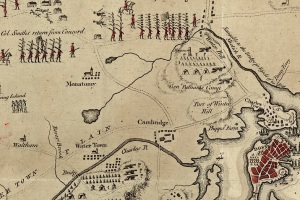 Public radio station WHYY in Philadelphia airs BBC World Update at 5 a.m. on weekdays. So on Friday morning, oddly enough, it was from the British Broadcasting Corporation rather than any domestic service that I heard surprising news from Boston.

During the night, police had chased two bombing (and robbery) suspects through the labyrinthine streets of Cambridge and Watertown, engaging in at least one major firefight along the way. Now the police seemed to be laying siege to a Watertown neighborhood. The reports at that hour were confused and confusing–not to mention frequently wrong. But as the hunt for the surviving terrorist suspect continued during the day, it became clear that the story was also, in several different ways, strangely familiar.

The timing of the chase, as part of a larger story, had already been commented upon. On NPR’s Morning Edition earlier that week, former counterterrorism official Juan Zarate had speculated that the date of the Boston Marathon bombing—April 15, which this year marked both “Tax Day” in the United States and Patriots’ Day in Massachusetts—might reveal a domestic right-wing motive: “I think the date itself, as well as the fact that April 19th is the anniversary of the Oklahoma City bombing, you know, has led officials to think that this could be related to an anti-government movement, militia movement.” Esquire’s Charlie Pierce had immediately thought the same thing. So had Time’s Alex Altman:

Worth noting: today is Patriots’ Day, which has significance for militia movement. McVeigh bombed Murrah Bldg on Patriots’ Day in 1995

By the end of the day, the New York Times had also cited “some law enforcement officials” as hinting that the week “has sometimes been seen as significant for radical American antigovernment groups.” Most of these sources were careful to qualify that idea, offering it as just one among several possibilities. But it seemed plausible, and some of them clearly favored that idea over others, perhaps overcorrecting for what they perceived as most Americans’ assumptions about terrorism. (If so, overcorrection inspired overcorrection; Rush Limbaugh retorted, “What if one of Bill Ayers’ students is out there trying to emulate him?”)

Indeed, the week surrounding April 19 also marks the anniversaries of the Oklahoma City bombing, the Columbine High School massacre (which some people thought might have been timed to coincide with Adolf Hitler’s birthday), the Virginia Tech massacre, and the terrible end of the Waco siege—giving the week a rich resonance for both the extreme right and homicidal attention-seekers.

But that was only one layer of historical semblances. The hunt in Watertown on Friday took place on the true Patriots’ Day, April 19, the anniversary of the battle at Lexington and Concord in 1775. So that morning, as reports arrived that some kind of paramilitary running battle was taking place in the western towns of Greater Boston, many people also saw surreal updates like these:

The British have been spotted within a mile of Concord.

As those last two messages suggest, I wasn’t the only observer struck by the coincidence of timing and (more or less) geography.

Already that morning, some people were conflating what they saw as two patriotic struggles in Boston—and two patriotic moments that showed, in Barack Obama’s words from earlier that week, the “free and fiercely independent spirit” that made Boston “this great American city.” Wendy Murray, referring to the Boston Massacre of 1770, had written (warning: bloody photo) that New Englanders “planted the flag of ‘what it means to be American.’” In the Boston Herald, Hiller Zobel celebrated patriotic responses in other cities as being “not the first time all America has rallied to Boston’s support,” giving Boston credit for cementing American unity in 1774.

A similar large-scale police manhunt and siege in the Los Angeles area in February had had none of the patriotic resonance. The time and place of this one helped amplify the sense, even before authorities identified their suspects as foreign-born, that these events had national significance.

The supposed historical parallel had some strange features, of course. For one thing, it seemed odd to identify the haphazardly armed colonial Minutemen, facing ranks of imperial troops from Boston, with the federal, state, and local police rumbling through Watertown on armored personnel carriers, searching for two or three individuals. Nevertheless, it was clearly possible to see the police manhunt as another act of patriotic self-defense by representatives of the American people. When federal agents found and captured the surviving suspect that night, fans at ballparks in other cities waved American flags, chanted “U-S-A,” and sang the Red Sox’ “Sweet Caroline.”

Finally, a further parallel presented itself when debates erupted on Friday night about how to interrogate or prosecute the alleged marathon bomber; Boston history played a role in the rhetoric of civil libertarians. Within an hour of the arrest, Atul Gawande and Spencer Ackerman had this public exchange:

John Adams would. RT @atul_gawande: The harder Q than whether you would save Suspect 2: would you legally represent him?

Our own Joe Adelman tweeted this:

Good time to remind people that John Adams offered defense for the Boston Massacre soldiers. Bad time to remember that they were acquitted.

And others, including the Christian Science Monitor editors, had already invoked John Adams as a model of level-headedness and a defender of the rule of law. Yesterday, the Salt Lake Tribune invoked him to chide certain lawmakers for “knee-jerk calls” to suspend the suspect’s civilian legal rights: “Especially in Boston. That is the city where a young lawyer named John Adams defended the British soldiers accused of killing five Americans in an incident known to history as the Boston Massacre.”

Of course, it’s worth pointing out that the soldiers of the Boston Massacre weren’t actually at war with America, as Lindsey Graham and John McCain believe the bombing suspect is.

None of the historical shadows lurking in the stories of the last week is a perfect fit for the Boston metropolitan area today. On the other hand, all of them are, to some degree, defensible ways of understanding the significance of the events we have seen. They’re ways of interpreting our own reactions to the terrible things that happened.

Why do so many of us identify so deeply with the marathon victims and the rest of the people of Boston, more perhaps than with the other victims of the week–the many people who were killed and injured in another explosion in Texas, or in powerful earthquakes in Iran and China? Proximity explains some of it, especially for those of us who live in Boston or who have friends and family there, as most early Americanists do. So does the knowledge that the marathon bombing was an attack, not just a tragic accident. So does the method of the attack. But it seems likely that historical dimensions of these events, and especially the sense that the towns of Massachusetts were once again united by an enemy, also had a lot to do with why people sang “Sweet Caroline” in Miami.