Mark Boonshoft is a PhD candidate at Ohio State University. His work focuses on colleges and academies, especially the networks forged in them, and their role in the formation of revolutionary political culture. 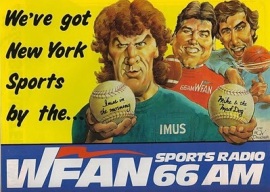 “Long time listener, first time caller.” These are words I heard often as a kid. I grew up listening to sports talk radio—mostly 660AM, WFAN-New York—and this is how many a caller introduced themselves. I’ve limited my habit—I no longer keep a transistor radio quietly playing under my pillow while I sleep—but I have not shaken it entirely. Long car rides are still a good chance to binge, and binge I did this July Fourth weekend. Driving through Albany, I called in for the first time ever.

Briefly, the host said that Alex Rodriguez’s career was one of, if not the most disappointing in the history of professional sports. When I asked him by what metric that was remotely possible, he basically responded that A-Rod was a cheater and a jerk. Well, duh. The grad student in me took over. How did that indicate anything about his career, let alone show it was a disappointment. This was a classic failure to define or clarify terms. I never got to say any of this on the air, which is probably for the best. But this interaction got me thinking about the disjuncture between academic historians and the lay reading public. There is an imperfect analogy here, if you bear with me.

First, I would argue that when people have debates about baseball on radio shows, and elsewhere, they are engaged in historical thinking. Throughout their lives, people immerse themselves in the primary sources (games, interviews, newspaper columns, statistics), and familiarize themselves with the prevailing interpretations of baseball history as told by authors, commentators, parents and grandparents, and talk show hosts. Then they craft their own interpretations. (I read somewhere that Forrest McDonald became interested in history when he realized he was already doing historical research while reading thousands of box scores in old newspapers). Even when hosts and callers are talking about the present, they love to make comparative analogies to past players, teams, and trades.

Second, because it is one of the most common ways Americans engage in relatively informed historical debate, it seems plausible that understanding how Americans talk about their national pastime, and the types of arguments that sports-talk-radio listeners respond to, may offer insights into how these same people like to talk about and read their nation’s history. This then may offer insights into the difficulties academic historians find in making their work appealing to the elusive general audience. And there is overlap between the general audience we seek, and people who love sports talk radio.

So what is sports-talk radio like? Its biggest personalities are mostly blowhards who offer strong interpretations, based ostensibly on a wealth of expertise and experience, without really considering the limits of their own or anyone’s knowledge. They ask simple questions: Who is a better player than whom? Which team is the best ever? What was the turning point in the history of some team? And they support their answers with a blend of meaningless statistics (more on that in a bit) and haphazardly compiled anecdotal evidence. They think very little, perhaps not at all, about how to properly weigh evidence from different perspectives, and time periods. And listeners eat it up. They come right back at them with similar types of arguments. And this is how baseball is debated at games, in bars, and amongst friends—it’s certainly how I usually talk about the game.

I have seen no signs of this changing anytime soon. It is somewhat surprising because in the late 1970s, slightly behind the new social history, appeared baseball’s analogous “school,” sabermetrics. It is a complex and nuanced way of thinking about the game using advanced statistical models to account for broad structural and cultural changes in baseball. Bill James—the patron saint of the sabermetricians—and others showed that the baseball statistics most people valued, and which many Americans can rattle off about certain players, were extremely flawed, failing to take context into consideration at all. Sabermetricians brought academic rigor to their work and rethought baseball from the ground up. They tried to understand how games are won and in turn what attributes are important in players for making that happen. It was a massive epistemological shift that opened up questions of how baseball works—not unlike the periodic “turns” that alter how we understand the nature of historical change—that has influenced, in varying degrees, almost all professional baseball organizations.

James and the sabermetricians also tried to reach beyond baseball insiders. They created a statistic—wins-above-replacement—that made comparing players from vastly different time periods more systematic, this being a favorite activity of fans. Nevertheless, people still think about baseball in pretty traditional ways. The Bill Jameses of the world still have less sway over mainstream understandings of baseball than the sports-talk hosts. Don’t believe me? Go look on the back of a baseball card, what stats do you see? Better yet, call in to a regular old sports-talk show or get in an argument at your local bar and bring up wins-above-replacement, runs created, defensive range factor, or my personal favorite, VORP. Let me know how that goes. Some people still downright resent the idea of sabermetric analysis. The current Yankees manager, Joe Girardi, has a binder full of advanced statistical information to help him make decisions. This garnered him the uncomplimentary nickname, “Joey Looseleafs.” Even after Moneyball, many fans still think that baseball is a game best understood through simple observation and gut instinct.

How does this admittedly strained analogy relate to Carl Becker and academic historians? Let me offer up a few thoughts. We tend to blame our failure in connecting with Becker’s “Mr. Everyman” on our reluctance or inability to tell stories and write good narratives, the subject of William Cronon’s recent AHA presidential address, as well as a number of discussions on this blog. If my analogy is at all instructive, the issue is not that we focus too much on argument over narrative; sports-talk radio listeners and baseball fans love arguments. There is simply a wholesale difference between the types of interpretations that academic historians and sabermetricians want to make and how they want to make them, and the arguments the general audience finds interesting. If Moneyball is indicative of anything, I’m not sure accessible writing can overcome this. If that is the case, and I’m playing the über-pessimist here, do we really want to give up on what we do in order to reach more people? At some level, I think we need to recognize that our project is a valuable one, even if we have a tough time convincing a lot of people of that. I think we can acknowledge our inability to find a wider influence, without having to shoulder all of the blame, or even laying blame at all.