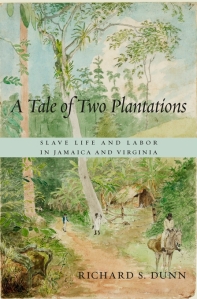 When Walter Johnson published Soul by Soul in 2001, he unleashed a critical analysis of the inner life of slavery.[1] More than just an exploration of the plantation complex, or even the indignities and tragedies of slavery, Johnson elucidated how the buying and selling of black bodies affected (in Johnson’s argument, corrupted) the participants in slavery. Johnson had identified a critical hole in the historiography. And now, Richard S. Dunn’s newest contribution to the scholarly discourse, A Tale of Two Plantations, compares life at two plantations—Mt. Airy (MD) and Mesopotamia (Jamaica)—to understand how slavery affected these two plantations, and conversely, how conditions on these plantations affected the enslaved.

The breadth of Dunn’s research is impressive. Anyone who has spent much time in the archives researching slavery will no doubt be familiar with the challenges of recreating the human stories of slavery. The location, selection, and application of sources are all fraught with difficult decisions.

Much of the source material for any project like Dunn’s is written from the perspective of the masters. Traditionally, this is what colonial historians relied on for source material in studies of slavery, particularly for historians of Dunn’s generation, who were trained in literary theory.[2] Much of the analysis of slave life at Mesopotamia is taken from accounts by Thomas Thistlewood, a white British overseer in Jamaica.[3] To be fair, the diary provides a sustained insight into eighteenth-century plantation life where sources can be scattered, missing, or incomplete. Dunn documents in his notes, efforts to locate in genealogical records and other sources, more evidence of Winney Grimshaw and her descendants.[4] Even a technique of using cemeteries, honed by historians like Kami Fletcher, may not yield satisfactory results under these circumstances.[5] The question remains, are there ways that these types sources might supplemented—narratives, runaway accounts, or other sources, to give a fuller picture of the “invisible man, or what Dunn calls “hidden people.”[6]

Even when there are obvious black-authored sources, the question of representativeness often arise. Can, for instance, historians reasonably use the writings of Phillis Wheatley, or Olaudah Equiano to represent (in a general sense) the experience of residents of the Black Atlantic when they were, in fact, so extraordinary? It is a research problem I have grappled with myself as I have worked on a book project on religion and self-making in the Black Atlantic, and one Dunn notes in his introduction.[7] Dunn addresses this problem of representativeness by focusing on 2,000 enslaved lives that were “ordinary” people. Walter Johnson, on the other hand, has argued that with “careful reading,” nineteenth-century slave narratives remain one of the best sources we, as historians, have for studying the history of enslaved people.[8]

Genealogical sources and baptismal records are another common way of reconstructing the lives of individuals. In some cases in A Tale of Two Plantations, slave families were kept together.[9] Some slave owners, like Henry Laurens, took great pains to emphasize that they kept their slaves together, as evidence of their “benign” (often Christian) slave ownership. “I had rather lose a large annual profit by keeping my Negroes comfortably together in families than avail myself of Gain by violent Separations of Man and Wife, parents and children,” he wrote.[10] More often, general lack of formal recognition for slave marriages and the frequency with which husbands, wives, and children were sold away from each other makes this sort of research a difficult and sometimes frustrating process. Baptismal records are also challenging, since the baptism of slaves remained controversial into the eighteenth century – especially among Anglican planters.[11] Since he has spent four decades in genealogical and other records, Dunn is no doubt painfully aware of the challenges and limitations of many types of sources when working on this particular subject matter. The result is that historians are left to make difficult decisions, and then often to explain their selection of sources.[12]

The question remains . . . beyond variety, how can historians best compensate for weakness in sources when it comes to reconstructing invisible, or obscured pasts?

[3] For a full analysis of the Thistlewood Diary and his life, see especially Trevor Burnard, Mastery, Tyranny, and Desire: Thomas Thistle and His Slaves in the Jamaican-Anglo World (Chapel Hill: University of North Carolina Press, 2004).

[12]  See in particular the excellent essay on sources at the end of Goetz, Baptism of Early Virginia, 211-216.