Last year, my university shifted its policy on assignments, meaning that faculty members suddenly got the option to change extant assignments, make new ones, and alter the weighting of any of them. This was a big transition, given that in previous years assignments were set by the department and students in each of our three class years could expect similar assignments in their courses. As a result, I’ve been playing around with assignments of zero or very little weight to try to prepare students—especially first year students—for the sometimes daunting task of the final essay assignment. Whereas before there was one low-weighted writing assignment before the final essay was due, I now have the low-weighted writing assignment (it’s half the length it was in previous years), an unassessed research proposal, and an annotated bibliography worth 10%. I want to talk about one of the problems with this last assignment.

Here are the requirements I gave students for the annotated bibliography, along with the marking criteria.[1]

One to two paragraphs in which you describe what you think you might argue in your essay, how you will narrow down the question to an essay topic you can cover within the word limit of the essay, and the types of sources you will examine.

After each source, you should include 1-3 sentences describing what the source is about AND how it will relate to your essay. 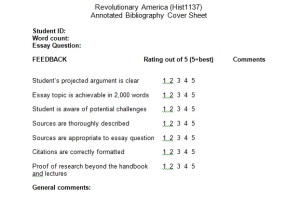 There is a special cover sheet for this assignment that you should look at before you start writing the assignment, because it will let you know which parts of the assignment are most important. The cover sheet is available for download on Blackboard under the “Assignments” tab. You must download it and include it with your assignment, instead of the regular cover sheet.

A successful annotated bibliography assignment will contain a paragraph or two with the beginnings of an essay argument; a list of primary and secondary sources consulted so far; critical comments on the way in which the student may use these sources to answer the essay question; and evidence of student research above and beyond the sources listed in the module handbook.

1st        Proposal contains all of the required elements. The approach to the set essay question demonstrates ambition and/or originality, and the paragraph is clearly written. The student has reflected upon the challenges posed by the question, and has also identified key primary and secondary sources which will be used to answer the question. The student has also discussed connections between these sources. The bibliography is annotated with critical comments throughout, identifying particular approaches or methodologies as well as connections between sources. The majority of these sources will be from outside of the lectures and module handbook.

2.1       Proposal contains all the required elements. The essay topic may not be as challenging or original as in a first-class proposal, and the bibliography may rely on material from lecture and the module handbook. The student may not have reflected upon the challenges posed by the question, but has still identified key primary and secondary source resources which will be used to answer it. Connections may not have been made between different primary sources or between historians in terms of approach. Some sources may be insufficiently annotated.

2.2       Proposal contains all of the required elements. The approach to the essay topic is relatively predictable, but is clear and to the point. Some of the text may be poorly written, and may contain proofreading errors. Research plan is not as clearly outlined. Bibliography is relevant, but may contain an uncritical choice of titles, be cursorily annotated or not annotated at all. The bibliography will show almost no evidence that the student has consulted material beyond the handbook.

3rd        Proposal contains all of the required elements, but the approach to the question is poor, and there is little or no sense of a research plan. Bibliography is relevant, but not annotated or critical in its inclusion of titles. The text contains numerous errors.

Fail      Proposal poorly formulates or does not identify its approach to the question, and may be missing other required elements.

As you’ll see from the marking criteria, I tried to make it pretty easy for everyone to get a 2:1, or the equivalent of a B+. Especially for these tiny formative assignments, I want to set students up to do well. The biggest problem I encountered in marking the assignment—despite what I thought were clear instructions—was that students weren’t making historiographical interventions, which was one of things I’d hoped they’d do in the bibliography so that they’d be well-placed to do so in the final essay. Next time, I’ll need to be more explicit. I’ll need to explain that a successful essay has a historiographical intervention. In a short essay of 1,000 words it may be only a line or two; in a 2,000-word essay it’s probably a paragraph; in a 4,000-word essay it’s probably a couple paragraphs; and in “dissertation” (senior thesis), it’s a large component of the introductory chapter.

“No one has written on this topic.”[4] This line is one of the first things students tend to say, and it’s the first one I want to caution them against. It’s a dangerous thing to tell the person marking your essay that no one has ever written something about a topic, because chances are someone has and you just haven’t looked carefully enough. Have you checked JSTOR and done a keyword search in your library’s journal holdings? At Southampton, we have a lovely system called DelphiS that you can use to search multiple journals at once. The equivalent for historians in the U.S. is probably Historical Abstracts, but a targeted search in WorldCat would probably accomplish the same task.

“Many people have written on this topic, and they’re all wrong.” This assertion is a fine beginning point for a first draft, but you cannot put it in your final essay. You need to figure out why you think previous historians are wrong, and along the way you need to acknowledge the research they’ve done and at least try to articulate how what they’ve said relates to your work. At a minimum, it’s more collegial to explain what historians have said, and how what you’re arguing relates to extant literature.

“Historians have said A, B, and C about this topic. An examination of the work of [scholars in a different discipline] changes the interpretation by…” “adding D”/“challenging A, B, or C.” In an age when many journals are available online, it’s become necessary (and useful!) to consider the work of people who are not historians. Some of the other disciplines historians engage with most frequently are anthropology and literature. Note that you’re allowed to challenge A, B, or C, but if you are taking that approach, you need to explain why historians should care about these changing explanations if A, B, and C relate to a different discipline. Remember that we’re still historians, and you need to make sure you’re still writing for historians.

“Scholars in [a different discipline] have argued A. A historian’s examination changes the interpretation by…” “adding B”/“challenging A.” This move is very similar to the previous one. With this example, though, you’re suggesting that very few historians have written on the subject. Again, you need to explain why historians should be invested in engaging with this discipline.

“The explanation for this topic is clearly A.” Usually, but not always, this is the assertion written by someone working on the topic very early on in the historiography. If you don’t see very many references to other scholars, chances are that the book or article is either from many, many decades ago, or it’s a non-university press. It’s okay to cite non-university presses in your historiography, but keep in mind that you may not find clear engagement with other scholars, which can make it difficult to assess the historiography. In general, you want the historians you cite to have written fairly recently (within the last three decades)–but it’s not a bad idea to take a look at an older book or two so that you can figure out where the historiography was half a century ago.

“The explanation is not A, it’s B.” This argument is what happens when someone decides that the first scholar or group of scholars who worked on this topic were wrong.

“The explanation for this topic is C, which is a combination of A and B.” This argument usually comes from someone working on the topic at least several years after people offering the A and B explanation. It’s possible that A- and B-camp scholars have been fighting, and C-camp scholars are either tired of the fight or sincerely interested in trying to find a way to reconcile the two camps. It’s worth checking the entire journal issue of C-camp articles, because it’s possible that you’ll find short responses from A- and B-camp historians.

“Why do we care about this topic? It’s more important to understand how people interpreted this topic at the time.” This historiographical intervention could come at any time, but it’s more likely to occur at least after A and B historians have had their say.

“Historians have written about this topic, but not during this time period. Looking at this topic during this time period changes the interpretation by…” This point can be one of the most exciting things you can say in an essay, because it indicates that you may have found something new to say. Be wary, though, of trying to make this point; many historians today struggle to do so.

I’m sure there are other types of historiographical “moves” that historians can make. Please speak up in the comments so that we can get a good list going.

[1] As usual, there’s no plagiarism in teaching; feel free to steal.

[2] A handbook is essentially a very long syllabus because it has a list of 10-15 additional recommended readings for each week.