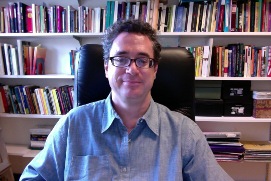 Historian Christopher Schmidt-Nowara passed away suddenly in Paris on Saturday, June 27th at the age of 48. Schmidt-Nowara was a prolific chronicler of the history of slavery and emancipation in the Hispanic world, as well as politics and ideas in the Spanish empire. He received his B.A. from Kenyon College in 1988. He completed his PhD from the University of Michigan in 1995, under the direction of Rebecca Scott, and taught at Fordham University in New York City for over a decade before joining the faculty at Tufts University in 2011. At the time of his death, he was Prince of Asturias Chair of Spanish Culture and Civilization at Tufts.

His research focused on slavery and emancipation in the Hispanic World, as well as political ideas in the Spanish Empire. He’s remembered particularly for his three books: Empire and Antislavery: Spain, Cuba, and Puerto Rico, 1833-1872 (Pittsburgh: University of Pittsburgh Press, 1999); The Conquest of History: Spanish Colonialism and National Histories in the Nineteenth Century (Pittsburgh: University of Pittsburgh Press, 2008); and Slavery, Freedom, and Abolition in Latin America and the Atlantic World (New Mexico: University of New Mexico Press, 2011). His most recent researched involved examinations of Spanish prisoners of war in the resistance to French rule, as well as Spanish independence struggles in America. He was also the editor of three journals: Bulletin for Spanish & Portuguese Historical Studies, Illes i Imperis/Islands and Empires (published at the Universitat Pompeu Fabra in Barcelona), and Social History.

Chris is remembered by his friends and colleagues as a generous scholar, friend, teacher, and mentor. A number have taken the time to share their memories with the Junto. We are grateful for their reflections:

Chris Schmidt-Nowara was, among many other things, my very first colleague. We met in 1989 during my first and his second year in the PhD program at the University of Michigan. Chris had entered the program interested in Spanish and European intellectual history. By then, however, Chris had become convinced that to understand Spain, one had to grapple with its ultramar. As we sat in a Colonial Latin American history class or a seminar on comparative postemancipation societies, he also liked to remind us that to understand Spanish America we had to study Spain. Starting with his dissertation on Spanish abolitionism (which later became Empire and Antislavery), all of Chris’s work sits at the intersection of European and American history, Atlantic from its conception long before that was fashionable.

Three days before Chris’s death, I had lunch with Sibylle Fischer, a colleague in NYU’s Spanish department, who is soon heading to Madrid to teach a course on Spain and the Atlantic World and wanted suggestions for historical readings, as well as advice on living in Madrid. I mentioned Chris many times in that conversation. On the intellectual history of the black legend, read Chris Schmidt-Nowara, I told her. On antislavery ideology in the Spanish world, again Chris Schmidt-Nowara. On racial thinking among Spanish intellectuals and statesmen, ditto. When the conversation turned to practical matters, I realized that even my enthusiasm for Madrid was something I had also first learned from Chris.

Chris loved Spain. As a graduate student, he spent three semesters in Madrid doing dissertation research on a Fulbright. I overlapped with him in his last semester. On my first day, he took a few of the new Fulbrighters to lunch and laughed about having accidentally referred to a male body part while ordering one of his first meals in the city. He told a joke about himself and put us all at ease. Chris shared his Madrid with us, persuading us to eat later and standing up, to linger over a caña or a fino, to order croquetas and patatas bravas. Chris introduced me and others to Spanish colleagues and Spanish archives.

We worked together in the Archivo General Militar in Segovia, making the cold, early morning trek up the hill to the Alcazar. I gave my very first academic talk with him. Chelo Naranjo of the Consejo Superior de Investigaciones Científicas had invited him to do an informal talk for the Latin American history group, and he told her there was another student from Michigan who could also do a talk. So we prepared something together. I still go to Madrid a lot, alone or with my family. Many of the places we love and frequent are places that Chris showed me so many years ago.

Whether in Madrid, Ann Arbor, or New York, Chris—in his openness and warmth, his generosity and vitality, his intellect and curiosity—showed me how to be a colleague. Sometimes I think he even modelled how to be in the world—to allow oneself to be a stranger somewhere—whether a foreign country, a new institution, or an unfamiliar historiography—and then absorb humbly and share joyfully. Chris did that better than most.

“There are several things that a PhD student imagines going wrong while writing a dissertation. Will the archives have what I’m looking for? How can I make my argument stronger? Has someone else written about my topic? How will I pay for all of this? As a mentor and dissertation advisor, Chris Schmidt-Nowara has been a lifeline since I first started graduate school at Fordham University. When he left Fordham for his position at Tufts, Chris called me into his office and reassured me that he would continue as my advisor. He kept that promise. His passing is a profound and shocking loss.

As many of you know, there is a unique relationship that develops between a doctoral student and an advisor. When I first started at Fordham, I was afraid that I had to make my research more explicitly match his. Instead, Chris told me that he wanted to continue with me as his student, but ONLY if I study what I was interested in. He encouraged me to push boundaries. As a result, I chose to write about the ways young people subverted the Francoist dictatorship in their everyday life, looking at comic books, punk zines, and other elements of youth and queer culture—a little divergent from his published work, but not surprisingly still in his wheelhouse. The one-on-one tutorial that I took with Chris will forever be one of my fondest memories of graduate school.

Despite being a senior scholar, and one of the most respected in multiple fields, he always made time for his students. He challenged my thinking, was my staunch advocate, and kept me on track. When Chris introduced me to someone it was also always with an affirming tone: “This is my student.” I knew he had my back. Although at Tufts, I always received regular mentorship from him, whether in Madrid, New York, Boston, Baltimore, or by Skype.

Only now has one of the greatest legacies that Chris left me become apparent with his passing: the vast number of scholars he introduced me to, both at Fordham and across the globe. I have a support system because of him—because of the types of relationships he cultivated with everyone he met. While he didn’t officially have many doctoral students, he both supported and mentored countless people across disciplines and borders. All his students and colleagues will miss his kind, inquisitive, and insightful hand.”

“Since coming to Tufts in 2011, Chris distinguished himself as a terrific scholar, accessible teacher, mentor to junior faculty, and intellectual thought leader on campus. He served as a bridge, both intellectually and personally, to a nexus of interdisciplinary pursuits that both included his own prodigious study of Spain, slavery, empire, and the Americas, but transcended these disciplines to include multiple students and scholars in an invigorating conversation that was intellectually stimulating and rigorous. Personally, Chris was a dream colleague, whose door was always open. He was quick to smile, crack a joke, a great listener, and active interlocutor about history, politics, sports, his daughter, food, beer, travel, and a host of other issues. He was an invaluable friend, colleague, and teacher who touched countless lives and will be deeply and profoundly missed by all those he touched with his presence.”

“When Tufts History faculty and students gathered last night (30 June 2015) to grieve Chris’s death and comfort one another, the words that came up again and again in our conversations and testimonials were generous, sunny, brilliant, fun and funny, humble and helpful. Everyone’s biggest agony was the very thought of his daughter Althea’s tragic loss the father who loved her so very dearly. He took such complete delight in her being.”

Readers who knew Schmidt-Nowara, or who were influenced by his work are welcome to share their own tributes in the comments. There is also an effort to collect photographs and letters to send to his daughter. Anyone who is interested should email or message the blog through our Facebook page for further details.

An obituary was published in the Albuquerque Journal from 7-12 July 2015. A memorial will be held in Boston in the fall.