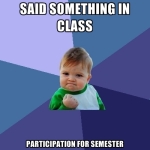 Class participation has bothered me since I graded a set of midterm exams from my first solo-taught course. As I sat down to read through those signature blue books, I felt anxious about how my students would perform. Had they learned anything? Did the lectures thus far sink in at all? To gauge the potential quality of the exams, I scanned through some of the responses of my “better” students and felt fairly confident grading the rest.

At the end of the stack, however, I came across an exam that has stuck with me. The student in question had me worried all semester. Not only did this student refuse to participate in class discussions but she frequently looked irritated whenever I asked the class a question that wasn’t rhetorical.

I had to read her exam three times. This student had absorbed every piece of information from the class—from lectures to readings, and even some of the more salient points brought up in discussion sections. Her exam demonstrated a sophisticated engagement with the class and I was stunned. I gave her an A and scribbled something in the margins about wanting to hear her participate more in class discussion since she clearly understood the material. Fast forward to the end of the semester when this student’s reticence caused her grade to drop from a solid A to an A-, and I was flummoxed.

After that experience, I started to wonder: is participation really that important if a student is clearly capable of learning the material without speaking in class? Recently, blogger and journalist Melissa Pandika recommended a serious reconsideration of the role of participation in classrooms. As she explains, “participation points can place quiet students at an unfair disadvantage” and create discussions “that echo the same viewpoints” of only the most talkative students. She argues that, the emphasis on class discussion “typically boils down to getting students to talk more and teachers to lecture less.”

However, is it fair to say that the pedagogical reason for encouraging dialogue comes down to simply wanting to “lecture less”? As William and Mary professor of history, Andrew Fisher, explains, “public speaking and verbal communication are skills students should develop in college.” Moreover, he argues that class participation, “encourages students to become more responsible for their own education” in meaningful and productive ways. While recognizing the importance of participation, Professor Fisher agrees with Pandika that introverted students are at a distinct disadvantage to their more extroverted peers. For that reason, Fisher’s class participation grades involve in-class discussions in which students prepare by composing questions on Blackboard and responding to each other, composing longer written assignments, as well as working in small groups during class before opening the discussion to the larger group. All three of these components become part of the student’s overall participation grade. Fisher’s approach to class participation highlights the pedagogical importance of discussion in a history classroom, not in order to “lecture less” but rather to teach fundamental communication skills.

Reading Pandika’s blog and discussing it with Professor Fisher reminded me of my introverted, but nonetheless engaged and intelligent student. I began to wonder if I had failed her somehow? If class participation serves a genuinely important purpose in liberal arts classrooms—as I believe it does—then why was it not a skill set that I taught my class with the same level of engagement as writing or testing? I would never, for example, inform a student that they performed poorly on a writing assignment, tell them to improve, but provide no framework or guidance to help them improve. In a sense, however, that is exactly what I did to my introverted student when I told her that she was not participating enough.

To this end, I have  decided to make class participation a more important part of my teaching rather than less. I agree with Professor Fisher, college needs to be where students learn to engage in public dialogue with their peers—in fact, I view the ability to synthesize information and express a learned opinion about it as essential as learning to write more effectively. Building on the kinds of online prep work used by Fisher, in the future my students will also receive a handout that outlines what I would consider a useful contribution to class discussion. Currently, this rubric consists of a “fill-in-the-blank” kind of response to class discussion that will, hopefully, encourage introverted students to feel more confident in their responses. Students will be encouraged to think of a response to class discussion consisting of three component parts. The first will be indicating who they are responding to, which also provides them a way to return the discussion to an earlier point that may have passed while they gathered the courage to raise their hand. This part of the response could be as simple as: “I’d like to respond to _____’s comment.”

The second section of the rubric consists of the student citing the material they are referencing in their comment. This middle component is essential, I believe, for talkative students as well. Hopefully by making students cite a source for their comments, I can avoid receiving regurgitated versions of the same comment from students over the course of the semester. It will, I think, encourage students to think about participation as a dialogue with the course material as much as a dialogue with the class. And finally, the third component of the response involves the student expressing their opinion to add to the conversation. In the end, students could have a clear structure for a comment that would sound something like: “I’d like to respond to _________’s comment. I read ­_________, and it made me think about________________.” My goal through this method, moreover, is to teach participation rather than to simply encourage it.

Pandika’s blog sparked extremely interesting conversations about class participation that I hope the wider Junto-reading community will take up. Surely there are better ways to approach discussion and as someone just starting to teach at the college level, I look forward to reading about the varied approaches used by professors and graduate students in the classroom.