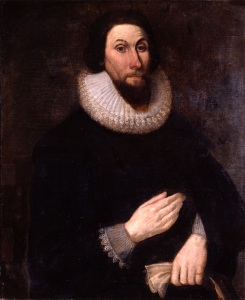 This month in class I’m teaching the Puritans, which means that an idea I’ve had for several years has returned, and I’ve been mulling it for a few days. As most of our readers already know, the Bible was easily the most widely owned and widely read publication in the British North American colonies (in particular in New England). Protestant Christian settlers were deeply versed in the Bible – they could cite and quote regularly from a broad range of prophecies, parables, and psalms. But they also read and understood the Bible in historically specific ways, focusing on certain books of the Bible in their study and reflection, quoting certain passages with higher frequency than others. For those of us who are not religious historians (and/or were raised ourselves in traditions in which textual exegesis was not strongly emphasized), figuring out not only the meaning of Biblical passages but also the ways in which specific historical actors used them would require significant reading.

That leads me to my request, my hope: I want there to exist a Guide to the Bible in Early America. I’m no Bible expert, so I want to take advantage of the knowledge and interpretive skills of those who are. Here’s what I envision—and early American religious historians, the idea is a freebie; take it and run with it!

With the flourishing of digital projects, at this point I could foresee something online. The problem I want to solve is to understand particular passages in historical context, so I want to be able to look up a passage from the Bible that was used frequently by a group in early America and find an explanation of the Biblical passage as generally understood, some notion of how the group or groups read this passage, how understandings of the passage changed across time and space within early America, and possibly links to other resources. It wouldn’t have to cover the entirety of both the Old and New Testaments, but instead could focus on the most frequently used books, chapters, and verses.

Let me sketch out a quick example with a verse that I used in a lecture last week on the Puritans as an introduction to Mary Rowlandson’s The Sovereignty and Goodness of God. When Puritans came to Massachusetts, they thought they were founding a new holy city in accordance with Revelation 21:10:[1]

10 And he carried me away in the spirit to a great and an high mountain, and he showed me that great city, that holy Jerusalem, descending out of heaven from God,

With a passage like this, I would want to know something about the consensus exegesis (am I allowed to do that to the English language?) of Revelation 21—a little primer on the chapter within the context of the entirety of the book for those of use not familiar with it. I would want to know a little something about John Winthrop and his “A Model of Christian Charity” sermon he delivered aboard the Arabella, and perhaps other examples of Puritan figures using the verse in order to support their arguments about the settlement of Massachusetts. Were there other groups in early America that drew inspiration from the same verse? I don’t know that well, but somebody does, and it would be interesting to be able to access that. And in this particular case, there could be an extension to discuss the resonances of the idea of a “city on a hill” in modern American politics.

In my mind’s eye, this kind of project would build on something like Lincoln Mullen’s fantastic America’s Public Bible project, which tracks the use of Biblical quotations in American newspapers. What I’m looking for would be a bit more interpretive, and take advantage of the expertise of a range of scholars. (Usually when I imagine it, John Fea plays a role overseeing the project. John, you’re not busy, right?) In fairness, it’s a massive undertaking, and might not even be feasible. But the Puritans didn’t get across the Atlantic by thinking small.
______________________

[1] Those hopes for New England were, as we know, later deflated.