“During graduate school, you have to be very focused on a topic. But in libraries you’re a generalist in many ways. In all the jobs I’ve had, I’ve had to learn new skills and topics.” ~ Dr. David Gary, the American Philosophical Society 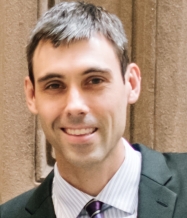 Good morning, Junto readers! As we head into July 4th weekend, what better city to visit than Philadelphia? Today, we discuss the exciting intellectual opportunities that accompany the curation of printed collections, with Dr. David Gary, Curator of Printed Materials at the American Philosophical Society.

Dave’s story highlights the vibrancy and variety of the history profession, as well as the many paths scholars can take, both during and after graduate school, to find themselves in fulfilling occupations.

JUNTO: We’re excited to have you as part of the “Where Historians Work” series, Dave. Tell us about the work that you do at the American Philosophical Society (APS). How does it relate—or not relate—to the research you undertook in your doctoral studies?

DAVID GARY: I oversee the Society’s various printed collections—books, pamphlets, newspapers, maps, printed images, broadsides, and ephemera. My curatorial responsibilities include building, interpreting, protecting, and making accessible the collections for current and future researchers. In other words, I help make the material at the APS safely available to a wide variety of users and add to the collection in ways that further our mission. I manage our cataloguing and conservation departments and help set priorities, devise plans to see them through, and support the staff in our ongoing projects.

No day is like another. In the public facing side of my job I work in the reading room getting materials for researchers, answer reference questions by e-mail, give tours to visitors, and work with the occasional undergraduate class. On the back-end, I follow the auction market, read dealer’s catalogs, and work with potential donors to acquire new materials for the library. The APS collects in the areas of the history of science, early American history, the history, ethnography, and linguistics of Native Americans, and the history of anthropology so I have a lot to consider. I make sure shipments arrive, items are accessioned (create a record of the item or collection’s arrival before it is fully processed), and that they begin their journey from cataloging to the shelf. For lack of a better term, there’s a lot of miscellaneous work that goes into my job—grant writing, updating the Web site, managing the collections backlog, working with volunteers, planning book shifts to make sure shelf space is used efficiently, among other things. The one constant part of my job is that I work to learn more about the holdings of the APS.

My doctoral studies at CUNY-Graduate Center focused on early American political history and the history of the book. I wrote my dissertation on the reading and book collecting habits of the New York Senator Rufus King, who owned a 3,500-volume library at his death in 1827. The King family donated the library to the New-York Historical Society and I went through almost all of the volumes very closely looking for marginalia and any evidence of use. I also looked at his letters, notebooks, and commonplace books and wrote about how reading impacts politics. That work gave me the opportunity to examine many different books and gave me a foundation for the work I do today.

JUNTO: What was the journey after graduate school like for you? Can you reflect on some of the choices you confronted when you made the decision to work in libraries?

GARY: For the first half of my doctoral program I worked as a cataloger at the Gilder Lehrman Collection. I enjoyed the work thoroughly, but didn’t decide to make library work my career until the economic crash of 2008. At that point, I started to consider my future a bit differently and began a Master of Library Science (MLS) program at CUNY-Queens College after my oral exams. Going into library work made sense to me because I was studying book history so intensely and enjoyed my time at Gilder Lehrman. I worked on my dissertation and attended library school part-time. It was tough being in two programs at once, but it’s opened up many options.

I started applying for library jobs about a year before I finished my dissertation. I must have applied for over 100 jobs during that year, but nothing really happened for me until I finished the dissertation at the end of 2012. I had three on-site interviews soon after graduating and ultimately accepted a position as the Kaplanoff Librarian for American History at Yale University Library. I worked there for three years before the opportunity at APS presented itself.

JUNTO: In our phone conversation, we chatted a bit about the role that work/life balance has played in many of your career decisions. Can you say more about this? In what way has the question of balancing your personal interests, time, and employment factored into your career decisions?

GARY: Being a curator at the APS means I can write, present at conferences, and publish, but without the pressure of the tenure track. At this point I’m still relatively new at the APS and learning the collections. It’s nice to know that I can take the time to figure things out and eventually get back to writing. Having the chance to answer other people’s questions and to help them with their projects is also energizing. Getting a chance to think about issues that don’t appear in my own research and being a generalist makes for a fun work experience. Most workdays end at 5:00 pm and I can focus on other aspects of my life at that point. That’s a definite plus.

JUNTO: What skills as a historian did you bring to your position, and what skills did you learn while on the job? How do these skills complement each other in your daily work?

GARY: As a historian, you have to learn to digest a lot of information quickly and organize yourself to answer research questions. During my time in graduate school I learned about bibliographies, reference resources, and databases where I could get the information I needed. My focus in graduate school was on eighteenth- and nineteenth-century America, but at Yale I spent more time focusing on twentieth-century American history and at APS I have to spend a lot of time with the history of science. I can get an understanding of just about any topic very quickly, which is useful as a librarian or curator.

GARY: The best thing I did in graduate school was work side jobs. My part time jobs and contract jobs in libraries and archives proved to be invaluable. If you’re interested in an alt-ac job, getting experience anyway that you can is important. Teaching was also helpful because it gave me the opportunity to become a better public speaker. I have to give presentations all the time and my work in the classroom prepared me for this. If you want to pursue an alt-ac career, I’d say networking is important—go to events and be seen. Showing up at talks, museum exhibit openings, or other events and mingling helped me get a few side jobs. I was also willing volunteer, although I know that’s not always possible.

JUNTO: Any final thoughts on career diversity for Early Americanists?

GARY: I understand the desire to work in the professoriate. It does have its advantages—prestige, research leave, the energy of life on a campus. That being said, work outside academia has been completely rewarding for me. Find ways to create options for yourself—getting an MLS was my way—but do something to create possibilities. I think the best example of that is Liz Covart’s podcast Ben Franklin’s World, which brought her into conversation with many different people and led to a position at the Omohundro Institute of Early American History and Culture.

JUNTO: Last but not least: what’s the coolest collection you’ve ever acquired for a library?

GARY: I’ll cheat and give a few—my favorite is the Yale VHS Horror and Exploitation Collection. I worked with Aaron Pratt, the co-founder of the collection and currently a curator at the Harry Ransom Center at the University of Texas, to acquire a collection of 2,700 VHS tapes mostly distributed from 1979 to 1985. The horror and exploitation genres were key drivers of the video revolution of the 1980s and the Yale collection has many of the most important titles with box art in good condition.

I’ve helped APS acquire a lot of interesting material—a doctor’s letter describing autopsies in Baltimore in the early 1840s comes to mind—but my favorite was the purchase of a small archive of material from Willis Ware, a computer pioneer who worked on an important computer project at the Institute for Advanced Study in Princeton from 1946 to 1951. The collection contains materials relating to his teaching of computer science in the early 1950s at UCLA as well as papers involving the publication of a computer textbook in the early 1970s.

Thank you, Dave. Best of luck with your future archival collecting! For Junto readers who use the APS library regularly, I’m sure many will be on the lookout for what new items you uncover.

“Where Historians Work: The View from Early America” will return next week. Have a great holiday weekend.