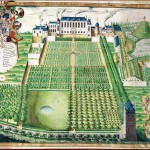 In 1714, Louis XIV of France obtained a coffee plant from officials in Amsterdam.  The plant’s lineage as a direct descendant of the original tree in Java conveyed key elements of monarchical authority:  the demonstration of the king’s unique access to overseas specimens and his central position in the webs of information, exchange, and power.[1]  That spectacle of cosmopolitanism was on display in the palace garden and by extension the scientific garden established in Paris, the Jardin Royal des Plantes.  Construction of the Jardin Royal des Plantes was proposed by the king’s botanist and doctor, Jean Hérouard, and it streamlined the scientific, medicinal, and economic aims of empire that were prominent among European sovereigns.

My years of thinking about the place of commodities like coffee, sugar, and cotton within production and distribution chains meant that the garden, as both a universal and recognizable form, appeared again and again.  Over time, I’ve come across various kinds of gardens large and small, and I’ve often wondered about their usefulness in serving as an aid to learning, discovery, and as historical case studies. Though generally humble spaces, they hold out possibilities for looking at cultural tales, national flavors, and the circuits of consumption for the early national period of American history.

Sites of early consumerism have produced powerful studies centered on the commercial cultures and habits of societies in almost every century.  The London Coffeehouse in Philadelphia, for example, reflected a mixture of the new economic, social and political elements emerging at that time as well as older structures that existed in the Atlantic economy.  A public auction for African slaves, part of a larger process of commodification and agricultural expansion, operated in the same space where coffeehouse merchant-patrons slowly sipped the black brew.  As a space of consumption (as well as production), gardens appeared as one such micro-border.  While many students of history credit singular causes in straightforward and linear ways, trading with natives for plants and animals grown locally give insight into the routine of early encounters, application, and exploitation of the natural world could lead to violence, and experimental, selective hybridization of cotton seeds by planters.  The palpable failures (and even successes) of these endeavors present the garden as a space in the colonial process where knowledge was transferred between people and provided a framework of speculative agricultural activities.

The cultivation of gardens could also socially segment people as well, prioritizing consumer tastes based on gender and race.  Settlers whose gardens were cast in the Elizabethan mold looked to the segmentation advised by John Winthrop, Junior’s A Short Method of Physick.  Housekeepers and wives “who are remote from a physician” were told to grow medicinal herbs for “fourty-five severall Diseases.”[2] African slavery provides yet other examples of these sites of consumption.  Take for example the factory-like scale of the sugar plantation in the French West Indies in the Archives Nationales, Paris.  In the map, three areas—the huge rectangular fields, factories, and houses, show successive stages of expansion.  Edging the forest are the small, multicolored patches which were the provision grounds on which slaves grew their own food.  They are cited in the map to allow maximum control by masters.[3]

Where the task system prevailed, in places such as Charleston and Savannah, African laborers could spend more time selling their produce in area markets.  The origins of African slaves informed the exploitation of their labor and appears in the context of large-scale gardening.  In Spanish Louisiana’s Charity Hospital, for example, an enslaved African horticulturist was used to oversee the institution’s hospital garden as well as a ‘Mulatto named Domingo…intelligent in surgery.”[4]  The garden provides evidence of a space used to hone the expertise of both enslaved and planter practitioners.

Like Jefferson’s Monticello and Washington’s Mount Vernon, gardens were a technical and cultural elaboration, and their construction presupposes some degree of natural or scientific knowledge.  Domestically, gardens reflect the logic of meals and issues related to household budgets.  They were constructed in the urban areas of Manhattan as well as altering the economic possibilities of households on the frontier.[5] What people planted changed in relation to the economics of consumption as well as the available resources at hand.  It is possible, I think, to utilize early American gardens as primary sources, as a tale about the growth of consumerism, the commodity chain itself, the development of property rights, and the needs of each era down to the present “new food economy” of the present day.

[4] Cameron B. Strang, Frontiers of Science:  Imperialism and Natural Knowledge of the Gulf South Borderlands, 1500-1850 (Williamsburg, Virginia: Omohundro Institute of Early American History and Culture and the University of North Carolina Press, 2018), 95.