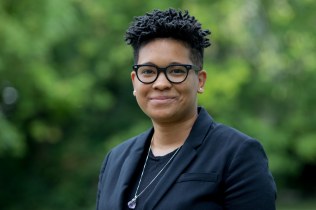 If you missed the first two posts in our new roundtable series on the history of childhood and youth, click here. On Mondays, Wednesdays, and Fridays for the next few weeks, stop by to read about challenges and realities of researching and teaching childhood and youth across vast early America.

We are thrilled to have The Junto’s very own Dr. Vanessa M Holden join the roundtable today to discuss her work on African American children, free and enslaved. Dr. Holden is an assistant professor of History and African American and Africana Studies at the University of Kentucky. Dr. Holden’s current book project, tentatively titled, Surviving Southampton: Gender, Community, Resistance and Survival During the Southampton Rebellion of 1831(University of Illinois Press), explores the contributions that African American women and children, free and enslaved, made to the Southampton Rebellion of 1831, also called Nat Turner’s Rebellion. Dr. Holden’s work and writing has been published in Slavery and Abolition: A Journal of Slave and Post-Slave Studies, Perspectives on History, Process: A Blog for American History, and The Rumpus. She also blogs for Black Perspectives. In addition to her work on enslaved women and slave rebellion, Dr. Holden also co-organizes the Queering Slavery Working Group with Jessica Marie Johnson (Johns Hopkins University). Her second project, Forming Intimacies: Queer Kinship and Resistance in the Antebellum American Atlantic, will focus on same gender loving individuals and American slavery. Follow her on Twitter @drvholden

VANESSA HOLDEN: I like to think of my work as a combination of both. I care how enslaved children and youths were perceived by adults in their own communities and how whites viewed them. But I also care about their experiences, choices, and lives independent from adults. How did enslaved children learn they were slaves? How did they interact with enslaved adults? How did adults train them and equip them for surviving slavery? How did they respond to this training and conditioning? Most importantly, how does studying enslaved children help us approach a fuller more holistic understanding of enslaved life, survival, and resistance? All of these questions lead to discoveries about children and childhood, youth and youths.

JUNTO: Those are very important and thought-provoking research questions. How do you define “childhood” and “youth” in your research? Do you use numeric boundaries to delineate difference? Do you notice a difference in historical contexts from our modern definitions and/or connotations?

HOLDEN: Much of what historians have available to them to study enslaved people sources produced by enslavers. And enslavers, along with Southern whites more broadly, regarded all enslaved people as property. Their use of age, numerical age ranges, in regard to Black people translated into their assessment of capability, skill, and labor capacity. Enslaved African Americans and free people of color had their own ideas and social structures that defined life stages: chronological age, generation, time of arrival after the middle passage, time of arrival via the internal slave trade, both Christian and non-Christian cosmologies, and kinship connections.

In my own work, I make use of a more elastic definition of childhood and youth. For me, the term “childhood” denotes certain stages of an enslaved person’s laboring life while the term “youth” allows me to make use of African American vernacular definitions of age. While a white slaveowner may have decided to work an enslaved teen as a full hand, their community might still regard them as young or junior to other community members. It would be hard to categorize a teenager as a child. But having youth as a category is helpful because it allows me to avoid anachronistic constructions of adolescence and it permits for an engagement with enslaved people’s sense of age and life stages.

JUNTO: I definitely agree about the usefulness of the “youth” category to help us better address historic adolescence. In that same vein, do you see “childhood” or “youth” as categories of historical analysis in the same way we might think of “gender” as a category of historical analysis? Why? How do you methodologically approach this?

HOLDEN: On the one hand, for the children I study, race and gender are far more important social markers than chronological age. For them, life stages in the eyes of their owners were more accurately termed “not yet able to work,” “able to work at light tasks,” “able to work at half the strength of a prime hand,” “prime hand,” than childhood and adulthood. Those categories all correspond to a price an enslaved person could fetch on the open market. On the other hand, to better understand how enslaved people experienced childhood and youth it is helpful consider childhood and youth as their own categories of analysis. Enslaved children were the literal future of slavery. Their survival to adulthood meant increasing wealth for planters.

Children and youths can also be considered as their own community within the enslaved community. Their work days were distinctly different from that of adults. The tasks they performed and errands they ran made for different types of mobility around the plantation and in between community locations. Children were valuable members of their communities and important members of kinship networks.

JUNTO: Even though children were considered valuable members of these communities, finding sources on children can often be a difficult task. Children’s own written records are not always well preserved or saved. What types of sources do you use and how have you had to creatively read sources for childhood experience?

HOLDEN: In some cases I use the same documents and methodologies that social historians use to look at the lives of other historical subjects. For example, census and tax records tell more than one story about enslaved childhood. Yes, white census takers categorized free and enslaved Black people into specific age ranges for some of the economically driven reasons I mentioned before. But, these records also allow us to determine information critical to enslaved community building that don’t correspond to chronological age. When did some individuals arrive on a given plantation? When were they sold away? What is the ratio of children to teens and adults? How does that change over time? Are teens sold frequently? Which generations are missing? Which generations are over represented? What might this information tell us about labor regimes on specific farms and plantations?

The WPA narratives taken down by government workers in the 1930s typically involve interviewees who were children during their time in bondage. Much of what ex-slaves, as they were known at the time, tell us is about their experiences as enslaved children. Some of the interviewees were born free and speak about life as free children of color. Along with the WPA narratives, published slave narratives like those of Frederick Douglass and Harriet Jacobs include descriptions of childhood.

Finally, enslaved and free children of color appear in the Virginia court records I use frequently. Enslaved children were inheritable property and appear as a part of slaveholdings in any number of legal documents. Free children could be indentured to white masters until they reached maturity either by their free parents or as the result of destitution. Indentures via the ministers of the poor bound out poor and orphaned children as a means of providing for their care. These children, white and Black, provided valuable labor to the adults who held their contracts.

JUNTO: What are the biggest methodological challenges you face as a historian of childhood and youth?

HOLDEN: I’m a historian of American slave resistance and rebellions who considers children to be vital parts of enslaved communities. Children are constantly overlooked in studies of slave rebellions often because white officials overlooked children in the aftermath of large violent events. Enslaved people left fewer records, in their own voices, than white enslavers. The methodological challenge comes when looking at documents constructed to privilege white male adults. Historians of women and African Americans often talk about reading against the grain. More often than not, there is no grain at all when it comes to looking at enslaved children. If they don’t appear in the court records or newspaper stories about an event, they can be easy to miss.

But, for example, in my research about the Southampton Rebellion children appear in critical documents all over the county at some of the revolt’s most violent locations. Paying attention to the children and youths who do appear helps us understand even more about the unnamed children who populated the neighborhood most affected by the rebellion. What did it mean to be a child in the midst of a violent revolt? A number of the rebels’ victims were white children, some of which were playmates to the numerous enslaved children in Southampton County, Virginia. The county’s community of children had a number of missing faces in the fall of 1831. Who picked up the slack when chore time came? Who feared that sale would take them away from their kin? Who was held a bit closer?

Broadly speaking, it can be tough to reconstruct a specific enslaved child’s life. And it can be harder to get at how enslaved people experienced childhood. Generalizations and informed supposition might be all we have in some cases. But it is possible to make meaningful contributions to what we know about enslaved children by acknowledging their presence in the archive we do have available.

JUNTO: Who are some of the most influential scholars to your research and why?

HOLDEN: I’ve been enormously influenced by Wilma King’s foundational work on enslaved children from the transatlantic trade to the era of emancipation. Marie Jenkins Schwartz’s work on enslaved children in the antebellum south and motherhood in slavery has also been very helpful as I look at children in my own work. Brenda Stevenson’s work on enslaved community life that includes an investigation of family structure has also had an enormous influence on my work. Daina Ramey Berry’s work on the life cycle of antebellum slaves chronicles enslaved life “from Womb to Grave,” as the title denotes, and posits a more holistic way to study enslaved people that juxtaposes their value to enslavers and their value to enslaved communities. There is also excellent work by scholars like Sharla Fett and Deirdre Cooper Owens that interrogates the history of medicine, gynecology, and childbearing during slavery.

Thank you to Vanessa Holden for joining us to discuss her work on African American childhood and slave resistance in the nineteenth century.

Join us Friday for a discussion with Holly White about her research on the definition and negotiability of age in early American law and society.