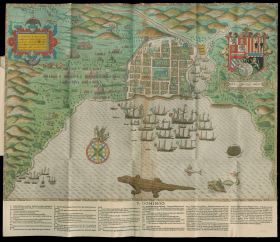 How do we select the sources we use? How do we approach those sources once we’ve selected them? What does that process do to the stories we eventually tell about the past? And, what happens when our sources disagree with the choices we’ve made?

That last question is one that historians working on the early modern period rarely have to grapple with – after all, the individuals who wrote the letters, manuscripts, and account books that we read have been dead for a very long time. And, it is an issue that I’ve blithely ignored until I read Manuel Gonzalez Pallano Tinoco’s “Narrative of the Invasion of La Española, Santo Domingo, which the English Attempted in 1655.” It is near the end of Captain Tinoco’s detailed description of the failed English invasion of Spanish Santo Domingo that this long-deceased chronicler called out future historians who would use his narrative on any but his own terms. And, his reasoning was compelling enough to make me question my own methodology in using his history in my work. END_OF_DOCUMENT_TOKEN_TO_BE_REPLACED