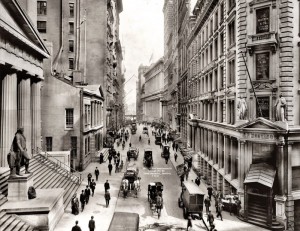 Seth Rockman begins and ends his recent essay on the “new history of capitalism” by describing capitalism as an economic system; but one of the features of the movement he describes is that it rightly treats capitalism as much more than that. As Rockman admits, “it is difficult to say what exactly it excludes.”[1] What’s most provocative and powerful about the new history of capitalism is precisely the fact that it recognizes and tries to historicize the pervasiveness of capitalism as a system that touches every aspect of our lives—everyone’s lives. Capitalism isn’t just in the workplace and the marketplace; as Jeffrey Sklansky has suggested, it’s in our very ways of being, seeing, and believing. But if the history of capitalism is an empire with no borders, just what kind of claims can it be making?[2] END_OF_DOCUMENT_TOKEN_TO_BE_REPLACED