The march to the Final Four continues! Results for the first round is found here. The original brackets are found here.

Today, we vote on the second round matchups found in Brackets One and Two. As in the First Round, voting is open until midnight EST. Tomorrow we will vote on Brackets Three and Four, and winners will be announced Saturday. We will then move on to the Sweet Sixteen on Monday.

As a reminder of how we got here, below are images of Brackets One and Two thus far. 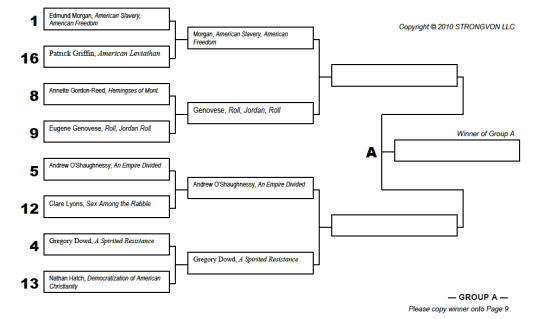 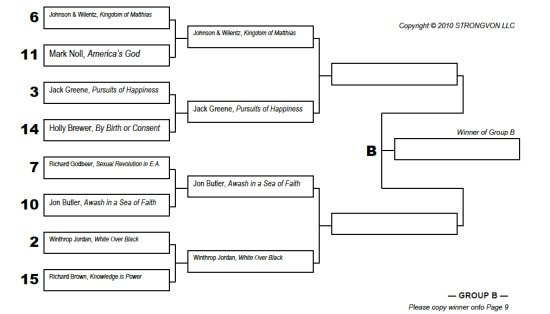 QUESTION ONE: Which is the most exciting matchup in today’s brackets?

Kenneth Owen: The most exciting matchup for me in Round 2 comes in the clash between Woody Holton’s Forced Founders and Gordon Wood’s Creation of the American Republic. Is a state-level study sufficient to seduce voters ahead of something taking shot at a grander narrative? Or does Holton’s deft weaving of racial and economic narratives give a more nuanced understanding of the Revolution than an ideological history based on elites? I’m really interested to see the discussions this sparks.

Michael Hattem: In Bracket 1, the Morgan-Genovese match-up is the most exciting because this is likely to be Morgan’s toughest test until his inevitable Elite 8 match-up with Jordan. Also, my dark horse in Bracket 1 is now a book I nominated, Jack Greene’s Pursuits of Happiness. In Bracket 2, like Ken, I am most excited  by the Wood-Holton match-up. First, it has a classic ideological vs. neo-progressive dynamic. Also, I wonder whether it really is our audience skewing older that is accounting for the success of many classic works over more recent works or is it simply because the effects of those works are already tangible (I’m thinking also of the McCoy upset). Also, in Bracket 2, my dark horse has now become Rhys Isaac.

Christopher Jones: There’s a lot of great match-ups in Round 2. I am a little bit surprised (though not necessarily disappointed) that Dowd’s _A Spirited Resistance_ made it out of the first round so easily, and think it’s pretty well positioned now to advance a bit further. I’m also intrigued by the match-up between Hamalainen’s Comanche Empire and White’s The Middle Ground. I have a feeling The Middle Ground will win, though I’ll be casting my vote for Comanche Empire.

QUESTION TWO: What is the most likely upset in today’s matchups?

Kenneth Owen: In bracket 2, I think the most likely upset comes from Daniel Richter’s Facing East From Indian Country as it, err, faces Bailyn’s Ideological Origins. I was surprised to see Bailyn secure a 2 seed in the tournament, and think that Richter’s reasonably comfortable victory over Nash in Round 1 bodes well for future chances. That said, similar analysis suggests that Merrell’s Into The American Woods may have a strong chance of defying seedings against Catherine Allgor’s Parlor Politics.

Michael Hattem: For my money, the two best chances for an upset come from Richter and Isaac.

9. Eugene Genovese, Roll, Jordan, Roll: The World the Slaves Made

5. Andrew Jackson O’Shaughnessy, An Empire Divided: The American Revolution and the British Caribbean

6. Paul Johnson and Sean Wilentz, The Kingdom of Matthias: A Story of Sex and Salvation in 19th-Century America

3. Jack P. Greene, Pursuits of Happiness: The Social Development of Early Modern British Colonies and the Formation of American Culture

10. Jon Butler, Awash in a Sea of Faith: Christianizing the American People

4. Woody Holton, Forced Founders: Indians, Debtors, Slaves, and the Making of the American Revolution in Virginia

6. James Merrell, Into the American Woods: Negotiations on the Pennsylvania Frontier

3. Catherine Allgor, Parlor Politics: In Which the Ladies of Washington Help Build a City and a Government

2. Bernard Bailyn, The Ideological Origins of the American Revolution