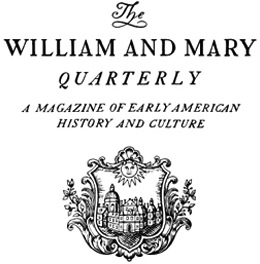 I planned on doing another “Articles of Note” post for today since it’s been a few months since the last one, and lots of new articles are indeed noteworthy, but I’m feeling lazy today. Plus, as a more legitimate excuse, the William and Mary Quarterly just put out an issue that is worth highlighting by itself. What originated as a conference sponsored by the OIEAHC and the Institute for Historical Studies at the University of Texas at Austin, “Centering Families in Atlantic History” addresses an important (and often neglected) issue in the vibrant, popular, yet often uneven field of study based around the Atlantic Ocean. In brief, two of the lessons that stood out the most to me were 1) the importance of family connectedness within an era usually dominated by an emphasis on empires and states, and 2) the much-needed diversification that encompasses much more than just Anglo-America (perhaps the biggest problem with the “Atlantic History” field.)

If you or your institution have a subscription to JSTOR, you can download the entire issue here. Hopefully we can have a more in-depth and substative review of some or all of the excellent articles in this issue, but for the time being I’ll just post the titles and abstracts here.

This issue of the William and Mary Quarterly originated with papers delivered at a 2011 conference, “Centering Families in Atlantic Worlds, 1500–1800,” cosponsored by the Omohundro Institute of Early American History and Culture and the Institute for Historical Studies at the University of Texas at Austin. Although both histories of family and histories of the Atlantic world have provoked considerable scholarly debate about the analytical coherence and utility of these terms, putting them together offers an important and fresh view of each. Certainly families were affected by economic, political, or cultural structures of many kinds, but they made choices and pursued strategies that, in thousands or tens of thousands of repetitions, shaped those same patterns. That is, their decisions, described as familial or made in the context of family relations, constituted micropolitics and microeconomics that cumulatively comprised critical elements in configuring the Atlantic world. Looking to Atlantic contexts also heightens our appreciation of the internal dynamics of family, in which those same decisions could be made by individuals either with or against collective family interests. And it asks us to attend to the definitions of family employed by the most interested parties, the people themselves, but also by external authorities who found the exploitation and regulation of family a critical instrument of imperial and other Atlantic powers.

In the decades following the first voyages of Columbus, complex and ethnically diverse societies formed in the large islands of the Caribbean (Hispaniola, Puerto Rico, and Cuba) as a result of the nature of the colonizing enterprise, which centered on gold mining and agriculture and relied on the coerced labor of the islands’ indigenous inhabitants. Spaniards also imported African slaves to provide labor for mines and sugar estates. Drastic population loss among the indigenous groups, importation of Indians from elsewhere in the Caribbean, a high degree of mobility on the part of Europeans who sought opportunities throughout the region, and early revolts led by African slaves all contributed to royal and ecclesiastical policies intended to safeguard marriage and family life, which were seen as crucial to fostering social stability. The rigors of the labor regimen imposed on Indians and Africans undermined their ability to form and maintain families. Though Spanish men might have preferred to marry European women, their primary domestic relations often were with indigenous, or perhaps African, women. The result was the early formation of an increasingly mixed population, especially in the smaller towns and countryside, that ultimately constituted the core of society in the Spanish Caribbean.

The historiography on slave families in the Atlantic world has tended to revolve around debates over whether the enslaved possessed the agency to construct and maintain natal families in the Americas. These debates have been especially germane to our understanding of the extent to which first-generation African slaves suffered a “social death.” In this article I argue that conceptual categories of natal kin are insufficient for understanding the various configurations of African family in the Atlantic world. Both in the African context, and extending into the Atlantic, Africans formulated overlapping and interconnected communities that resulted in multiple registers of “family.” Blood ties represented one important aspect of these families, but natal kinship was often the by-product of broader adoptive, corporate, spiritual, and intellectual communities. In the Atlantic, Africans found creative means to expand on these communal ideologies, very often building new families from mere threads of sociocultural recognition and belonging.

Spanish fathers’ arrangements for mestizo children in Peru from the 1540s through the 1560s highlight Iberian family practices in transition. The 1532 arrival of Spanish men in Peru created the context for many sexual unions, coerced and consensual, between Spanish men and indigenous women. Many Spaniards chose to ignore the children of these unions. However, dozens in the cities of Lima and Arequipa recognized their children. To enact their paternal role, these men removed children from their indigenous mothers’ care and sent them to Spanish households in Peru and even Spain. Extant cases such as these expose family-like relationships in a context of cultural encounter. Here, Spanish fathers considered the upbringing of their out-of-wedlock children, its material and cultural aspects, as part of their paternal obligation. Records reveal that the pattern for the care of mestizo children and their indigenous mothers emphasized Iberian role models for mestizos. Moreover, the incorporation of these children into Spanish households considered their value as labor. By the 1560s it became routine to refer to these boys and girls as mestizos, but in the 1540s and 1550s they were sons and daughters who garnered the attention of their Spanish fathers. Their experiences exemplify how family adapted to transatlantic empire.

This essay calls for an approach to Spanish Atlantic family history that takes into account the essentially fictive nature of all families, including those based on blood relations, in order to better appreciate the nonbiological affective ties that made Spanish colonialism possible in the first place.Familiaridad, or the family-like relations created through practices of child rearing and youth training, was integral to the Spanish colonial project in Lima, Peru. In this Atlantic hub, “becoming” castes, diasporas, ethnicities, and races often involved, ironically, dependencies and affections created with other groups—something that is evident in the complexities of community among early indigenous migrants to Lima; the construction of Atlantic slave kinship and slave familiaridad in masters’ households more generally; and the sentimental ties that developed between hired wet nurses and “Spanish” foundling girls.

Elite African merchants accessed credit from European traders through a system known as pawning. Indigenous to Africa, the system required African traders to place family members, usually their sons, in the hands of Europeans as security for the trade goods advanced to them. Pawns could also be used to guarantee the fulfillment of diplomatic agreements. Under the system of pawning practiced by African and British traders on the eighteenth-century Gold Coast, if the African merchants did not return with the required number of slaves by a given date, then their children were considered slaves and could be sold off the coast. Generally, everyone involved tried to avoid that drastic measure, but some unscrupulous captains kidnapped pawns, an act that could have disastrous consequences for the conduct of the trade. Africans might respond by closing the trade or by retaliating against any British traders who fell into their hands. For that reason, the British often worked to prevent that outcome or retrieved kidnapped pawns from the Americas and returned them to their families, often years after their enslavement. As a result of this system, British traders tried to understand the family relationships among their African counterparts, and they often developed close relationships with these family members that worked to further the trade. The slave trade had significant family and class dimensions, and pawning illustrates how closely the trade was bound to larger social, political, and economic structures.

Nancy Christie, “‘He is the master of his house’: Families and Political Authority in Counterrevolutionary Montreal”

In postrevolutionary Montreal between 1783 and 1820, a reassertion of patriarchal rule was integral to reaffirming a hierarchical society, a counterrevolutionary bulwark against the republican United States. This reassertion of patriarchy was thus fundamental to the sociopolitical project underpinning the new British Empire, which had to contend with unstable ethnic and plebeian social groups, including potentially rebellious peoples such as French Canadians and people of color, including black slaves, panis or Indian slaves, and mulattoes. Reasserting the government of the family elided differences between the family and the household, which included kin, apprentices, and servants. The political ideology represented by patriarchalism thus forestalled the emergence of the “modern” private family form. Evidence from the criminal courts of Quebec shows the ways in which patriarchal masculinity was policed by both patrician and plebeian men and how it was employed to defuse challenges from rival concepts of masculinity, especially those proclaimed by turbulent youth and the omnipresent military.

In the 1760s “Mulatresse Lene” was cassaret (married) to Danish interim governor and slave trader Frantz Joachim Kühberg in Osu on the Gold Coast. The local history of Ga-Danish families such as hers in Osu illustrates how Euro-African women on the West African coast could benefit from marrying European slave traders and could use these marriages to expand their room for maneuver in the coastal society. By marrying European men, christening their children, and sending them to the church school at the Danish fort, Euro-African women claimed a powerful intermediary position in the racialized social hierarchy of the Atlantic slave trade, and as they did so they helped reproduce this same racial hierarchy. Yet Euro-African families were not just taking advantage of their position to widen their opportunities; they were also using it as a means of protection in a violent and stressful slave-trading environment. At the height of the slave trade in the second half of the eighteenth century, Africans participating in the slave trade—even elite Euro-Africans such as Kühberg and her family—were under pressure to protect themselves and their families from being sold across the Atlantic.

Although the language of individualism permeated the legal and political systems created during the French Revolution, kinship and friendship networks continued to determine access to positions of power, and the self-interested individual never had much resonance beyond the realm of discourse. Adult sons nonetheless found that they held new legal and symbolic power, which changed the nature of their relationships with preceding generations. Revolutionary transformations in family law and later under Napoléon Bonaparte did not address the situation of widows, but the combination of other laws with the rhetoric of the all-powerful male individual separate from the responsibilities of lineage limited widows’ ability to defend their rights. Two cases where adult sons entered into conflict with their widowed mothers illustrate the significance of these changes. These cases shed light on some unexplored consequences of the revolution for the family, revealing how the younger generation benefited relative to their elders. The French case in turn relates to other parts of the globe as the Napoleonic Code, which helped to enshrine this new system, served as a model for legal codes throughout Latin America and in the French Empire.