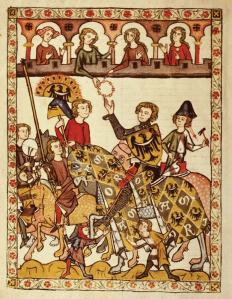 The baker’s nod, the knight’s blade, the king’s touch: These are three of the main and mostly medieval reasons why I read and write American history. Over the past few days, we’ve lauded new writing blueprints, parsed the definition of an academic book, and even made good sport of the whole reading selection process. So, in the last, spooling print loop of Academic Book Week, let’s rewind the too-short life of Marc Bloch for tradecraft’s sake.

To shift us from writing lessons to reading sources, I’ll tackle a seminar favorite, Bloch’s Feudal Society, the book that pushed me onto a Ph.D. path and into public history. At once a gem of medieval insight and a wartime hymn to the power of reading the past in a nuclear age, Feudal Society (1939-40) led a fleet of scholars to reconsider why we must read history. Gleaming with detail about the inner lives of vassals and their vendettas, of the medieval moment when village bonds hardened into class ties, the brightwork of Bloch’s analysis sold me on the idea that producing high-quality history for the “general” audience was/is an attainable goal.

One introductory line fixed the French medievalist’s evergreen appeal for a weary graduate student of early America. “No survey will be made here of those paper wars in which scholars have sometimes engaged,” he wrote. “History, not historians, is my concern.” Orthodox knowledge of the historiography did not fully drop out of the picture. Rather, in Feudal Society and elsewhere—The Royal Touch, French Rural History, The Historian’s Craft—Marc Bloch proved a sure-footed navigator of secondary literature. He never sacralized citations, instead stockpiling footnotes in a treasure trove at the manuscript’s end. Unapologetically, he confronted historical dilemmas of geography, etymology, class, and kinship webs—because his subjects did. He peppered the text with arguments and question marks, handing off research roadmaps to the next scholar with trademark generosity and wit. And, in Feudal Society, Bloch used the longer timeline (la longue durée) of the Annales School of social history that he co-founded, foregrounding the experience of “ordinary” people over centuries. His earlier work, The Royal Touch (1924), revised the origins story of European monarchy’s “supernatural” power in curing scrofula, a disfiguring disease. Here is another beautiful curiosity of his biography: As he transitioned into a French resistance fighter, Marc Bloch chose to take miracles seriously.

A decade after launching the Annales d’Histoire Economique et Sociale journal with Lucien Febvre, Bloch offered Feudal Society as a new model of medieval synthesis. He dove deep to interpret Visigothic raids. He speculated on what conquerors sang as they claimed land. More than a breakneck tour of early Europe, Bloch narrated his social map with a colorful amount of intimacy and suspense: Would the knight’s sword be blessed? How did Philip I of France treat his serfs? Could a carpenter’s vision end the blood-feud? Bloch lingered on atom-level details because they made up his mosaic of the age. Bigger questions magnetized Bloch to studying and interpreting Feudal Society, too. There, he investigated how the medieval “taste for the past” operated, and what led men and women to form long-term “bonds of interdependence” and economy. With an expert grip on far-flung archives, Bloch dealt with the competing evidence of tradition and trace. He searched out the backstory of folk memory, and mined literary epics. In Feudal Society, he became, as modern Twitterstorians might appreciate, a gifted curator of content.

When Bloch could not understand a source, or if he found it lacking, then he said so, and often with roguish charm. “She had no native epic, nor does she seem ever to have had one,” Bloch wrote of Italy. “What is the reason? It would be the height of temerity to pretend to solve so difficult a problem in a few words.” Historians, as he emphasized, were not to be problem-solvers on the page. A book was a theory sandbox. (Here, for example, Bloch sent his reader back to researching Latin chronicles for clues).

Moments like this made me trust Bloch more. Bloch was a responsible reader, and he wrote like it. In Feudal Society, we are invited to think alongside him. There’s a spontaneity to his tone that is exhilarating to read, and especially so in the grad-school grind. Bloch swung between bouts of joyful discovery and genuine archival confusion. He wrote in an age when the new science of relativity shifted nations and loyalties; that atmosphere of potentiality seeped into his work. Look at his language. He braided the narrative with possibility: “As far as we are able to go in the history of the German people…”; “The veil is only lifted at a date nearly a century later…”; “One might also be inclined to observe that…” An expert lensman of medieval life, Bloch zoomed in on his own (specialist) corners of interest. Deftly, he squired along the “general” reader without losing command of the tale. Thanks to Bloch, I now saw a way to teach from the archive, using documents and “ordinary” experience to translate early America for public history.

Reading sources, I believe, is the single hardest task that scholars do. It took a medievalist for me to settle on telling stories from early America as a career. With Feudal Society, Bloch conveyed that footnotes were footholds; collective behavior often reflected global change; and longer timelines meant more, well, time to indulge curiosity. When I think of Marc Bloch’s academic impact, it’s all bound up in three small actions. There is the king’s touch that he used to reapproach history “from below,” and the lost world of chivalry that he resurrected with a knight’s blade in Feudal Society. Finally, there is the baker’s nod, as a French shopkeeper pointed out Bloch to the Nazis, who seized and executed him in 1944. The Historian’s Craft (rightly) gets plenty of glory, but Bloch’s greater service as a scholar (and one totally engaged in the political battles of his day) deserves a special huzzah during this Academic Book Week. In Feudal Society, he showed that the best kind of history relies wholly on good reading. Writing “big history,” as Bloch seems to suggest, means more than a pingback to what has come before us.