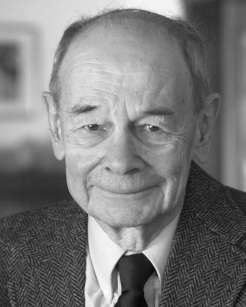 Ed Morgan changed the way historians understood the American Revolution. Over a period of about ten years, from 1948 to 1957, he published three important research articles, a monograph, an essay aimed at a general audience, and a historiographical article, all having to do with the coming of the Revolution. It was an amazing burst of work that elevated Morgan to the upper echelons of American historians. Of course, Morgan had previously worked on Puritanism and would go on to do groundbreaking work on colonial Virginia and slavery. But he made his bones with the American Revolution.

Sometime following his move to Brown University from the University of Chicago in 1946, Morgan began looking at sources from the 1760s. At the time, the reigning historiographical paradigm of the Revolution was the Progressive interpretation. In the first decades of the twentieth century, historians like Carl Becker and Charles Beard inspired a reaction against the Whig interpretation of the Revolution that dominated much of the nineteenth century. Whig historians, most notably George Bancroft, wrote of the Americans’ successful resistance against the rise of British tyranny as part of a longer, divinely inspired march toward democracy. He was a millennial nationalist; so was his history. Becker and Beard saw class conflict and economic interests as decisive in explaining the American Revolution, with the former positing a “dual revolution” thesis. In 1909, Becker wrote: “The American Revolution was the result of two general movements; the contest for home-rule and independence, and the democratization of American politics and society. Of these movements, the latter was fundamental.”[1] By the 1940s, this interpretation not only held sway in academia, but had seeped out to a broader audience.

Because Progressives saw an economically motivated power struggle between internal classes as well as between the colonies and the mother country, they saw motivations in terms of interest. Hence, they interpreted the constitutional debates (of both the 1760s and 1780s), particularly amongst the elites, as deceptive rhetoric, i.e., a cover for both class-interest and self-interest. However, when Morgan looked at the sources, he saw something different.

Morgan took a leap of faith in “insist[ing] on taking seriously what the colonial leaders said they were fighting about.”[2] For him, the American Revolution was, at its core, a constitutional crisis between the metropol and its colonies. He believed that Becker’s “dual revolution” thesis, “distorted [the internal conflict] beyond recognition.”[3] Perhaps his single most important interpretation came first in “Colonial Ideas of Parliamentary Power.”[4] Progressives had argued that the colonists’ changing of their arguments during the imperial crisis supported their thesis regarding the power of interest. Morgan contended that the Americans’ arguments against the power of Parliament to tax the colonies were “intellectually consistent.”[5] He came to this conclusion, in large part, by privileging sources from the colonial Assemblies over the more factious pamphlet and broadside literature. Morgan’s insight was informed by his failure to find “a trace of the ideas which Americans are supposed to have adopted” from 1764-1777, namely the distinction between internal and external taxes.[6] This was followed later that year by an article in the New England Quarterly showing that even Thomas Hutchinson held the common colonial position regarding taxes, and two years later he published another article in the WMQ on “The Postponement of the Stamp Act.”[7] Eventually, the work of these years was synthesized in The Stamp Act Crisis: Prologue to Revolution (1953). 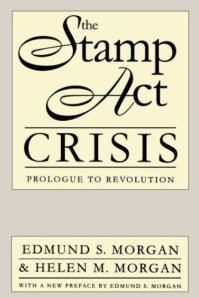 During the first four decades of the twentieth century, there was another interpretation that informed the way historians viewed colonial America. British imperial historians strongly influenced the work of Charles M. Andrews, who looked at the colonies through the lens of the imperial metropol. To them, British behavior during the 1760s was rational and, essentially, logical. That is, Parliament were not being tyrannical in imposing taxes on the colonies and King George III was not a bumbling fool being hoodwinked by his Ministers at the behest of the power-hungry Parliament. Morgan, however, took a rather dim view of the King and believed the Parliament also had not acted smartly. They weren’t tyrants, but they also weren’t good imperial managers. Nevertheless, what was important for Morgan was not how either he or the imperial historians judged the Parliament and the King’s actions but how the colonists judged them.

At the same time as Morgan was writing, yet another interpretative school was gaining traction: the consensus school. Reacting, in part, to the Cold War (and there should be no underestimating the influence of anti-communism in the late 1940s/early 1950s reaction against the class-based Progressive interpretation), a new interpretation arose from the work of historians like Louis Hartz, Daniel Boortstin, and Richard Hoftsadter. These historians believed that the Progressives had overplayed their hand on internal class conflict. They wrote about unifying aspects between classes and, intellectually, they stressed that a broad-scale consensus existed around the liberal political philosophy of John Locke.

Morgan has always been hard to fit into any historical school. Some historians thought that his arguments about a consistent belief in the limited rights of Parliament placed him in the consensus school. However, the point of Morgan’s work was not to assert a broad consensus throughout colonial society so much as amongst the resistance leadership. Others thought that his stress on the constitutional nature of the conflict made him a neo-Whig historian, a twentieth-century George Bancroft. For Morgan, what was truly revolutionary about the American Revolution was the idea of equality, but Morgan was an atheist; he was not a millennialist in religion or history.[8]

That said, he shared with many Whig historians perhaps his most important contribution to the historiography of the American Revolution: the idea that ideas mattered. This contribution helped lay the groundwork for those historians many have called “neo-Whigs.” In the early 1960s, Bernard Bailyn, taking Morgan’s assertion about the importance of ideas as a starting point, traced ideas late in the colonial period. His student, Gordon Wood, traced ideas during the Revolution and the 1780s. From the late 1950s to the 1970s, the American Revolution became the staging ground for intense historiographical debates regarding the intellectual character and causes of the Revolution. Of course, just like the Progressives rose in reaction to the Whigs, neo-Progressives arose in reaction to the neo-Whigs. But Morgan had helped spark what is arguably the most fruitful period of the Revolution’s historiography.

At the end of ten-year period, Morgan was not content with simply having made a significant contribution. He concluded the period first by writing The Birth of the Republic (1956). In less than 200 pages of artfully concise prose, he summarized for a general audience the new interpretation of the Revolution that his previous work had shaped. (Remember that at the time general readers read these kinds of works by academic historians.) He ended the period in 1957 with an article summarizing the historiographical debate in which he had been taking part, “The American Revolution: Revisions in Need of Revising.”[9] More importantly, he suggested directions for historians of the American Revolution to pursue. He challenged them to “dissect the local institutions which produced the American Revolution.”[10] After perhaps the most intensive period of significant productivity of his career, Morgan felt the need to reach out to both the general reader and his fellow academics.

Morgan’s most lasting achievement in terms of the American Revolution was to legitimize the history of ideas. But this was not your old-school type of intellectual history that primarily traced the genealogy of ideas. Instead, Morgan was interested in how ideas played out in the behavior of individuals and groups and how they could be utilized and manipulated by institutions. His interest in the former would culminate three decades later in Inventing the People: The Rise of Popular Sovereignty in England and America (1988). Morgan’s American Slavery, American Freedom (1975) may have won The Junto‘s March Madness tournament, but, especially in terms of influencing subsequent scholarship, his work on the American Revolution has had a longer and, arguably, a more significant impact on the field.