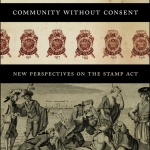 On Sunday, the United States Postal Service introduced a stamp commemorating the 250th anniversary of the repeal of the Stamp Act. Today we are pleased to present an interview with Zachary Hutchins, editor of a new collection of essays from Dartmouth College Press that challenges traditional understandings of the Stamp Act Crisis as (in the words of the USPS) “setting [the colonists] on a path toward revolution and independence.” Zach is an Assistant Professor of English at Colorado State University. In 2014 he published his first book, Inventing Eden: Primitivism, Millennialism, and the Making of New England. A 2016 Fellow of the National Endowment for the Humanities, Hutchins is currently completing his second monograph, Before Equiano: A Prehistory of the North American Slave Narrative. END_OF_DOCUMENT_TOKEN_TO_BE_REPLACED

As many of our readers already know, this fall has marked the 250th anniversary since the protests against the Stamp Act, one of the earliest major actions of the imperial crisis that resulted in the American Revolution. Over the course of a year—from the first arrival of the Act in May 1765 until news of its repeal arrived in May 1766—colonists in the “thirteen original” colonies (as well as the “other thirteen”) passed resolutions, argued in essays, marched in the streets, forced resignations, and otherwise made clear their displeasure with paying a tax on their printed goods.

END_OF_DOCUMENT_TOKEN_TO_BE_REPLACED

250 years ago today, the Stamp Act was in legal effect throughout the British North American colonies—including not only the “Thirteen Colonies” but also British possessions in Canada and the West Indies. As those who study the American Revolution know, the matter was rather different when it came to the on-the-ground impact.

END_OF_DOCUMENT_TOKEN_TO_BE_REPLACED

Today’s post is a guest post from Tim Worth, a PhD candidate at the University of Southampton. His thesis examines transatlantic Scotophobia during the late eighteenth century, and how ideas of ethnicity affected British and American images of empire. 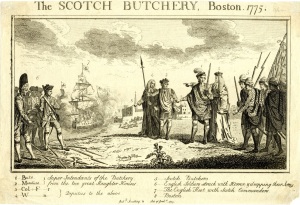 The Scotch Butchery, Boston 1775, (London, 1775). Lord Bute and the Scotch Junto instruct Highland soldiers to slaughter the inhabitants of Boston. On the left, a group of English riflemen drop their muskets in horror. © The Trustees of the British Museum.

Over the past couple of years I’ve followed the fascinating Junto debate about whether or not we can see the War of American Independence as a civil war. Tom Cutterham and Christopher F. Minty have both put forward some excellent arguments outlining the strengths and weaknesses of this model. Whether or not we should use the term “civil war,” a great many contemporary writers often described the conflict as a tragic war fought between Britons. Today, I want to add a little more to this debate by breaking these Britons down into their component parts, and briefly examining how popular attitudes towards one of the ethnic groups we’re left with, the Scots, affected English and American ideas of the war during its early years. END_OF_DOCUMENT_TOKEN_TO_BE_REPLACED

We’re happy to bring you the fourteenth episode of “The JuntoCast.” END_OF_DOCUMENT_TOKEN_TO_BE_REPLACED

Ed Morgan changed the way historians understood the American Revolution. Over a period of about ten years, from 1948 to 1957, he published three important research articles, a monograph, an essay aimed at a general audience, and a historiographical article, all having to do with the coming of the Revolution. It was an amazing burst of work that elevated Morgan to the upper echelons of American historians. Of course, Morgan had previously worked on Puritanism and would go on to do groundbreaking work on colonial Virginia and slavery. But he made his bones with the American Revolution. END_OF_DOCUMENT_TOKEN_TO_BE_REPLACED