This is the fourth post in a weeklong roundtable about “The Origins of the American Revolution.” On Monday, Tom Cutterham kicked things off by exhorting historians to stop “separat[ing] economic from constitutional, imperial, political, or even intellectual causes of the revolution.” His post was followed on Tuesday by Jessica Parr’s post, which raised questions about the convergence between religious and political rhetoric during the Revolution. Yesterday, Mark Boonshoft considered the importance of civil society and associationism in thinking about the origins of the Revolution. The roundtable will continue tomorrow with a post by Ken Owen and on Saturday with a final guest post by Jackie Reynoso. 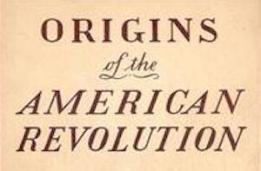 In thinking over my contribution to this roundtable, I realized that, in the last two years, I have written at least five posts and done an episode of The JuntoCast on this very topic. In “The Return of the Revolution,” I called for a recommitment to the questions of origins and causes, something that had been hampered by synthetic studies of the late colonial period based on a consensus model. In “#RevReborn, Periodization, and the American Revolution,” I discussed the problematic uncertainty regarding periodization of the Revolution, particularly the recent trend to extend the endpoint of the Revolution and the reluctance to do the same in terms of the beginning of the Revolution. In “Have Cultural Historians Lost the American Revolution?” I tried to understand the recent relative ennui regarding study of the Revolution’s “origins and causes” in the broader context of developments in the field as a whole. And, in “The ‘Suddenness’ of the ‘Alteration’: Some Afterthoughts on #RevReborn2,” I noted the disappointing lack of papers directly engaging the questions of origins and causes at a recent conference devoted to the 250th anniversary of the Stamp Act.[1]

Along the way, I have offered a few possible points of inquiry (some well received, some decidedly not but such are the perils of blogging about historiography). I have called for a return to a reconsideration of both internal colonial political and religious conflict in the decades before the Revolution as a way of complicating the consensus narrative of late colonial politics and society and rethinking the internal dimension of the origins of the Revolution. Most “notably,” I have also called for “new cultural studies of the political origins of the Revolution,” suggesting that perhaps pre-existing cultural breaks could have helped make such a relatively quick political break possible. For my thoughts on those questions, you can refer to the pieces linked above. Today, however, I want to talk briefly about the distinction between “origins” and “causes” and a little bit more about why thinking of “cultural origins” may be productive.

What do we mean when we talk about the “origins and causes” of the Revolution? This roundtable, by name, is about one, not the other. Right? Or wrong? In talking about either, one is necessarily putting themselves in a position of having to make a large and (hopefully) synthetic argument, opening themselves up to the stock criticisms often leveled at ideas or works of synthesis. It seems to me there is a perceived connotation of grandiosity in including “origins” or “causes” in the title or subtitle of one’s work, even more so when talking about the “origins of the American Revolution” or “causes of the American Revolution.” In recent decades, the desire to avoid such perceptions gave way to the ostensibly more-inclusive but even more ambiguous phrase, “the coming of the Revolution,” which, to me, often seems to conflate the two. That is, it’s a way of talking about “origins” or “causes” of the Revolution without the perceptual baggage that would come with using the actual terms.[2]

For myself, when I use the phrase, “origins of the American Revolution,” I am referring to long-term developments in the decades prior to independence. For example, when Jack Greene talks about the constitutional origins of the Revolution, he is referring specifically to developments over a period of decades prior to independence, in which competing conceptions of the constitutional arrangement between the colonies and the mother country crystallized. Origins, to me, denote various long-term developments that made both the imperial crisis and independence possible. The phrase “causes of the American Revolution” meanwhile, seems to me to imply short-term developments, perhaps most commonly in the form of more discrete events or changes.

That seems clear enough, but indefinite ideas about periodization make it a bit more complicated.[3] Periodization is crucial to how one would perceive the ideas of long- or short-term. For example, if one is inclined to believe that the Revolution begins in 1765, then the Stamp Act resistance looks very much like one of many “causes.” However, if you believe that the Revolution began sometime between 1774 and 1776, then Stamp Act resistance looks more like part of the “origins” of the Revolution. Therefore, in terms of debating origins and causes, we need not only to distinguish between the two but, those working on the questions, also need to more clearly define their own periodization of the Revolution.

After attending both the MCEAS and the MHS conferences on the Revolution, I am more convinced than ever that indefinite periodization not only has contributed to the perceived incoherence of “revolution studies” generally, but also the stultification of the questions of origins and causes more specifically. Indefinite periodization has also contributed to the field having less a debate about future directions in Revolution studies than having people seemingly talking past each other. In the end, it’s hard for two people have a debate about the Revolution and/or what parts of it are worthy of reevaluation if both mean something different when they say “the Revolution.”

If the roundtable to this point has had a theme, it is a desire for a more complex rendering of the origins of the Revolution that goes beyond constitutional and ideological terms, and that can take into account a variety of potential developments that made the imperial crisis and the Revolution possible. In some sense, the question that follows is: can you have that and still have a coherent synthesis of the “origins of the Revolution.” As I’ve said before, the main question one has to answer regarding the Revolution is: how do you get from 1763 to 1776 in only thirteen years? That is, how you do account for such a relatively quick political break? The answer is the combination of origins and causes.

I have called for thinking about potential “cultural origins” of the Revolution in an attempt to answer that question, in part, because it creates space for a varied set of potential origins, e.g., changes and/or divergences from Britain in economic culture, religious culture, history culture, consumer culture, political culture, or print culture, to name a few. But, in doing so, it also contains a potential conceptual framework for providing a coherent synthetic answer to that fundamentally political question.

Finally, when we are talking about rethinking and revisiting the origins of the Revolution, we are mostly talking about rethinking and revisiting the late colonial period, something I think is highly exciting and a bit overdue as we find ourselves on the other side of the halcyon days of early republic hegemony in the field.[4] In any event, the combination of the spate of conferences on the Revolution, some recent journal articles, and, dare I say, this blog have helped re-start and/or contribute to a discussion about the origins (and causes) of the Revolution.[5] And that can only be a good thing.

[1] Also see Michael D. Hattem, “Reading the Field from a Book: Some Thoughts on Eric Nelson’s The Royalist Revolution,” The Junto: A Group Blog on Early American History, January 12, 2015.

[2] Douglas Bradburn, “The Rise of the States: The Problem of Order and the Making of American Independence,” paper presented at the American Historical Association Meeting, January 5, 2008. Also mentioned in the introductory paragraph of Mark Boonshoft’s post.

[3] Another issue raised in yesterday’s post by Mark Boonshoft.

[4] For a post on the importance of the colonial period to understanding the early republic, particularly in recognizing continuities between the two, see Michael D. Hattem, “The Old World of the New Republic,” The Junto: A Group Blog on Early American History, August 18, 2014.