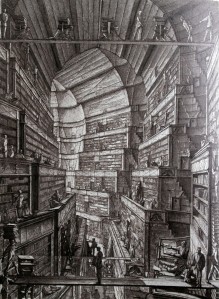 Should historians embrace the art of narrative, or treat it with more suspicion? In his review of Sven Beckert’s Empire of Cotton back in July, USIH’s Kurt Newman argued that “the book-length narrative” is not “the proper form for the presentation of a historical argument.” Narrative, he wrote, involves too much selection, too many authorial choices hidden from the reader. “Most importantly,” Newman suggested, “constructing a narrative is almost always tied up with some telos or end,” a teleology that serves as expression or conduit of ideology, pulling us towards the outcome we imagine fits. Narrative, in other words, is something more than reasoned argument. It enlists desire to shape the way we think.

For the rest of the week here at The Junto, we’ll be holding a round-table event on narrative in historiography, and we invite you to join in in the comments. What makes something a “book-length narrative,” or what distinguishes narrative history from any other kind? Are there alternatives to narrative that we should be adopting? How does narrative work—or fail—in journal articles and other non-book forms? We would love to hear about your favourite examples of narrative and non-narrative historiography. We’ll be sharing some of our own this week too.

Personally, I’m a fan of narrative. That’s because I think historiography is just as much an art as a science. We have standards of fidelity to the evidence that mark the boundaries of our discipline. Uncovering new evidence, or finding new ways to employ it, are exciting parts of what we do. But presenting and interpreting that evidence is at least as important. As Hayden White discussed over forty years ago in Metahistory, however we choose to do that involves some sort of emplotment, and therefore some element of ideology. To note every omission, to justify every authorial choice, would be to write a book that encompassed the universe—a truly Borgesian feat. The art of history, instead, is to shape those choices and omissions for effect.

I don’t think I’ll get a lot of pushback when I say that the master of narrative history in my own field of early national America is Alan Taylor. What I like about Taylor’s work—especially the early books, Liberty Men and Great Proprietors, William Cooper’s Town, and The Divided Ground—is the impression I had when reading them that the story as a whole was meant to tell me something. As Newman points out, “narratives embody arguments, flesh them out, illustrate them, render them legible to readers.” Rather than constructing a narrative around an argument, Taylor seemed to let his arguments emerge from the stories he told. That gave those books a powerful subtlety, a sort of fractal nuance. Things always became more complex the closer you looked. In that sense, they had the texture of the past itself.

Taylor could only achieve that effect by refusing to render his arguments in schematic terms. Something else he gained from that refusal was a wonderful infusion of irony. At least, that’s how I always read the books. In my reading, each one of them was saturated with a moral condemnation of the private-property institutions imposed by Euro-American elites; but Taylor would never say that outright. Maybe it was just me, but those books seemed to drip with pathos. They moved me.

There’s a complex web of ideology behind that emotional effect, which Newman is right to want to investigate. Historians should be attentive to these structures, I’d argue, not only so they can critique them, but also so they can manipulate them in their own work. For me, the book-length narrative remains the most powerful form of historical argumentation. We should learn to encode our arguments the same way that great novelists and painters do. The aim is not just to be more persuasive, but perhaps to be more true as well.