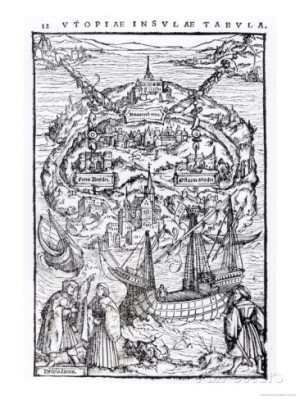 This year I’m overhauling my early American survey course. Not only do I need to make it fit the schedule at my new institution, but because I’m planning to be teaching here for quite a while, I also want to build a course that carries my own signature, and where I can work out some of my own questions and ideas. Survey courses that I’ve taught before—like the one designed by Sarah Pearsall for Oxford Brookes University—have been themed around the violence of empire and slavery. Obviously, those continue to be both central concerns in teaching and the foci of cutting-edge scholarship. But in my search for something different, and for something that might capture the imaginations of my first-year students, I’ve chosen a different path: utopia.

What I mean by that is the drive to imagine and create new forms of society—often radically discontinuous from those they sprung from, whether geographically separated or emerging from revolutionary transformation. As in Thomas More’s original Utopia of 1516, there was both a Christian and a secular humanist dimension to this drive. The context in which More wrote his book was not far removed from the one in which English colonialism began in the New World. It would be quite a stretch to say that every colonist was a utopian, or any colony a utopia. But that’s not the point.

I want my course to explore the range of motivations that lay behind the enormous, expensive, and dangerous efforts to begin, perpetuate, and transform European empires in North America, from the perspective of participants as well as empires themselves. As much as poverty, greed, fear, and family ties made up a good deal of that collective motivation, I don’t think those factors should obscure the intellectual and emotional experience of settlers, migrants, or their successors. The same can be said for enslaved people and their successors, and the Native people whose worlds were also transformed. One way or another, they all participated in utopian projects, however misguided and unjust, however failed and catastrophic.

I’m aware of the big, flashing “Warning!” signs that might be going off in readers’ heads right now. After all, it’s taken generations of work by historians, teachers, and activists to move us on from exceptionalist patriotic narratives, and to put the horrors of slavery and empire at the centre of the North American story. Is it really sane to imagine reframing that story in terms of utopian dreams? Isn’t it downright offensive? Well, I’m working through these ideas, and I hope you’ll pull me up if you think I’ve gone off the deep end.

Utopia is always an inherently doomed project, grappling with the quintessentially human disconnection between imagination and reality. The utopian impulse is also a critical one, as Fredric Jameson has pointed out. Its visions are born out of frustration and discontent, and they hold within themselves an implicit critique of actually existing conditions. The clearest example of that, at least in my plan for the survey, is the utopian, millenarian dimension of slave rebellions down the centuries. But it’s also true of the more explicitly utopian communities established throughout the history of Euro-American settlement—and, one might also say, of the United States itself. These critiques haven’t always been correct, of course, but understanding them is a way to grasp both past conditions and how people understood them.

So, I’ll report back on how all this goes with students in the room. I don’t intend to explicitly signpost my theme. Rather, I’m allowing it to guide me as I write my lectures and approach the contours of the survey as a whole. By the end of the term, however, I hope students will have caught on. And given how much we’ll also have learned about the violence and barbarity of early America, I hope they will start to see the tensions that make utopia a fruitful avenue of narrative investigation.