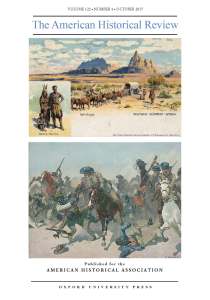 An article just came out in the American Historical Review’s October issue that should be on the radar for anyone interested in early American history: Holly Brewer’s “Slavery, Sovereignty, and ‘Inheritable Blood’: Reconsidering John Locke and the Origins of American Slavery.” In it, Brewer connects Locke’s criticism of absolutism with an opposition to inheritable slavery, thereby casting our understanding of democracy, capitalism, and slavery in an entirely new light.

This nuanced and deeply researched argument challenges the tendency to portray Locke as a proponent of slavery, claims rooted in the fact that he authored Carolina’s Fundamental Constitutions. However, as Brewer argues, “Locke’s support for slavery was weaker than his critics have implied” since his role in Carolina’s constitution was “as a lawyer writes a will,” or as paid employment rather than philosophical conviction (1052). And, despite his authorship of a document that provided constitutional sanction of slavery in the colony, Brewer argues that Locke and his mentor, Anthony Ashley Cooper, opposed the “principles of hereditary status” and absolutism under the Stuarts – including hereditary servitude in the form of slavery (1047).

In this sense, and through detailed analysis of the development of slave law throughout the Anglo-Atlantic, Brewer’s article challenges long-held notions about the relationship between slavery and freedom, arguing that “Slavery and racism were part of larger arguments about hereditary status and lineage. Slavery was part of a broader denial of power to many, not just to African Americans. American slavery developed as part of broader debates about justice” (1075). The implications of that claim alone should cause a rethinking of how we understand the development of slavery and democracy in early America, and encourage Junto readers to spend some time with Brewer’s article.

This is, of course, just a cursory summary of an excellent article, but I wanted to lay out the larger claims in order to highlight something that struck me after my first reading of it. In the acknowledgements note on the first page, Brewer thanks the scholars who commented on her research over the nine years that she had been working on it. In those nine years, versions of the article were presented at several seminars and passed through the hands of an impressive list of scholars including the eight anonymous peer reviewers selected by the AHR. That is a tremendous amount of academic labor over nearly a decade and resulted in an article that will be read and reread for decades to come.

And it got me thinking about publishing, tenure, and the academic timeline. Years ago a friend of mine told me that he felt like the academic job market was an arms race in which young scholars worked fast just to add more lines to their C.V. in order to look more attractive to hiring committees. In some ways, perhaps he was right. But, just like any cook can tell you that slow cooking often brings out more subtle flavors, Brewer’s article demonstrates the benefits of slow history, where presenting work and thinking about it over nearly a decade resulted in something more nuanced and important than earlier versions could have been.[1]

It’s also a luxury that I’m not sure untenured faculty and graduate students have. Or do we? Knowing that everyone has different opinions about when and what to publish, I wanted to open this up to Junto readers. Slow history or arms race? What kinds of pressures to publish should graduate students and untenured faculty put themselves under? Or should we take more time with our ideas, present them widely, and publish when they have fully developed?

And, if nothing else, give Brewer’s article a few hours this week—it will be worth your time.

[1] That said, calling Brewer’s article slow history is by no means an insult. Considering the breadth of her research and thinking, nine years seems like a quick turn-around.