In today’s guest post, Cho-Chien Feng, a PhD candidate at Saint Louis University, remembers his late advisor, Michal Jan Rozbicki, and his last book, Culture and Liberty in the Age of the American Revolution (Charlottesville: University of Virginia Press, 2011). Before Rozbicki began his twenty-seven tenure at Saint Louis University in 1992, he served as Director of the American Studies Center at Warsaw University. His first book on early America, The Complete Colonial Gentleman: Cultural Legitimacy in Plantation America, was published in 1998. He passed away on July 31, 2019.

Professor Michal Jan Rozbicki passed away on July 31, 2019 after retiring from teaching this June. As a student of his, I would like to take this opportunity to revisit his contributions to the early American history and hopefully stimulate some further reflections or conversations. In the summer of 2011, when I went to New York to conduct research for my master’s thesis, I found his book, Culture and Liberty in the Age of the American Revolution, in a bookstore. After reading few pages, I was so attracted by his ideas and viewpoints that I knew I wanted to contact this author and see if I could be his student. That was what I did, and that was how I came to Saint Louis. END_OF_DOCUMENT_TOKEN_TO_BE_REPLACED

In the early Americanist community’s conception of #VastEarlyAmerica we constantly attempt to push the boundaries of what and where early America is. Randy M. Browne’s Surviving Slavery in the British Caribbean will appeal to proponents of a vaster early America in part because it pushes the geographical limits of early America. Browne’s study of slavery in Berbice (present-day Guyana), takes his readers to one of the most understudied slave societies in the Americas, to understand how enslaved Berbicians attempted to survive their bondage from the beginning of the nineteenth century in the Dutch period, to 1834 when British slavery ended. This is an important distinction from other studies of slavery which focused on understanding and fighting against notions of “agency” and “resistance” such as Marisa Fuentes’ prize-winning Dispossessed Lives: Enslaved Women, Violence, and the Archive, and Vincent Brown’s  2009 American Historical Review article “Social Death and Political Life in the Study of Slavery,” among others [1]. By contrast, instead of highlighting the voices of those in open rebellion, Browne focuses on those whom attempted to better their situation despite remaining under the yoke of bondage. Browne does this by accessing one of the most bountiful, yet underutilized, archival records of the voices of enslaved people [2]. Browne mines information about how enslaved Berbicians attempted to survive and carve out lives in one of the most oppressive slave regimes in the Americas. Whether describing the use of obeah as a spiritual defense mechanism to sustain themselves through the institution of slavery, the use of Black slave drivers, or how enslaved women and men attempted to sort out marital and partner discourses, Browne adeptly traces how enslaved Berbicians attempted to live, and most importantly, to survive, slavery. END_OF_DOCUMENT_TOKEN_TO_BE_REPLACED

2019 began with a bang when I traveled across the pond to become the first graduate student studying in the U.S. to present at the University of Oxford’s Early American Republic Seminar (OxEARS). Without the work of my new intellectual family members and OxEARS co-conveners, Grace Mallon and Stephen Symchych, along with the love, support, and prayers of my family and friends stateside, my overall experience at Oxford would not have been as amazing as it was. END_OF_DOCUMENT_TOKEN_TO_BE_REPLACED

How and why does a group in a society feel affection for the society they live in, despite the constant abuses faced by them? A great case study to help answer the question is through the anti-slavery movement. Boston abolitionist intellectual Maria Stewart, after the loss of both her husband, James Stewart and intellectual mentor, abolitionist David Walker in 1830, refocused her life on Jesus and fighting for her race. From that foundation, she met and collaborated with  upstart white abolitionist newspaper editor William Lloyd Garrison of The Liberator. Garrison was a major influence on Stewart’s public career because Garrison promoted Stewart as a voice of her people, and the Liberator offered her room to publicly debate the best policies for her race’s future. In one of Stewart’s published writings in the Liberator, she wrote about death to the body of the enslaved, that would also free the soul. “The blood of her murdered ones cries to heaven for vengeance against thee. Thou art almost drunken with the blood of her slain.[1]” The plunder of black bodies effectively built the United States, and based upon Stewart’s interpretation, America became drunk from its excess. END_OF_DOCUMENT_TOKEN_TO_BE_REPLACED

In light of the recent tragic stories of family separation occurring on the Mexico-United States border, what instantly came to my mind was America’s history of dislocation through American slavery. From the United States’s conception, the place of the country’s Black population, enslaved and free, was centered in debates on who this country was ultimately built for. There were factions that saw slavery as antithetical to the founding principles of “freedom, liberty, and the pursuit of happiness.” During the Revolutionary War, even British orators like Samuel Johnson, clearly saw this dichotomy. In his 1775 pamphlet Taxation No Tyranny: An Answer To The Resolutions And Address Of The American Congress, Johnson juxtaposed the colonist’s “Declaration of Rights,” and equivocated “If [s]lavery be thus fatally contagious, how is it that we hear the loudest yelps of for liberty among the drivers of negroes.”[1] Not all factions of the founding generation decidedly occupied one camp of pro-slavery or anti-slavery though. America’s first and third presidents denoted this friction. Washington and Jefferson’s stories denoted both held surface level anti-slavery positions, yet also owned hundreds of bondswomen and men; very similar to what Johnson characterized. This complication stemmed from the generation’s refusal to resolve the “slavery question” that plagued the new nation. Political compromises, like the counting of enslaved peoples as three-fifths a person, prolonged America’s reckoning, but only temporarily. However, a middle ground emerged by the early 19th century: colonization. END_OF_DOCUMENT_TOKEN_TO_BE_REPLACED

We are pleased to host a Q&A with Craig Bruce Smith, author of the recently released American Honor: The Creation of the Nation’s Ideals During the Revolutionary Era (UNC Press). Dr. Smith received his PhD from Brandeis and is an assistant professor of history at William Woods University. We will be featuring a review of the book in the coming weeks. END_OF_DOCUMENT_TOKEN_TO_BE_REPLACED

An article just came out in the American Historical Review’s October issue that should be on the radar for anyone interested in early American history: Holly Brewer’s “Slavery, Sovereignty, and ‘Inheritable Blood’: Reconsidering John Locke and the Origins of American Slavery.” In it, Brewer connects Locke’s criticism of absolutism with an opposition to inheritable slavery, thereby casting our understanding of democracy, capitalism, and slavery in an entirely new light. END_OF_DOCUMENT_TOKEN_TO_BE_REPLACED

We continue “The Ideological Origins of the American Revolution at 50,” our joint roundtable with the S-USIH blog. Today’s post is by Jonathan Wilson, an adjunct faculty member at the University of Scranton and Marywood University. He studies ways that intellectuals—elite and otherwise—articulated American national identity in eastern cities during the early nineteenth century. 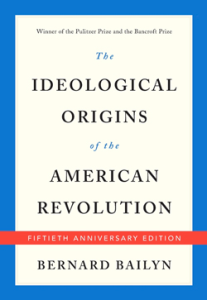 Upon first reading The Ideological Origins of the American Revolution, I found it liberating. (That places me alongside Michael and Sara more than Ken this week.) True, Bernard Bailyn’s book was yet another attempt to credit elite white men for an idealistic national founding. From my perspective at the time, however, it modeled a way to study the ideas of relatively ordinary people. Bailyn depicted revolutionary thoughts as the work of communities, not individuals. He showed me that the life of the mind can encompass the inarticulate, the half-said, even the irrational, in ways that historians can analyze. This was powerful.

END_OF_DOCUMENT_TOKEN_TO_BE_REPLACED

This week The Junto is co-sponsoring, “The Ideological Origins of the American Revolution at  50,” a weeklong roundtable on Bernard Bailyn’s seminal work with the Society for U.S. Intellectual History (S-USIH) blog. Each of the five posts will appear on both blogs concurrently. For readers unfamiliar with the book (or looking for a refresher), please see Episode 12 of The JuntoCast.

Throughout the winter of 2016-17, I helped organize “Ideological Origins at 50,” a conference jointly sponsored by the USC-EMSI and Yale’s CHESS to honor the fiftieth anniversary of the publication of Bernard Bailyn’s seminal work, The Ideological Origins of the American Revolution. The conference papers, presentations, and discussion were quite lively, as was Bailyn himself who delivered a 75-minute talk on the opening evening. Since then, other tributes to the book and its long-term influence and impact have appeared online. However, all of these have had one thing in common; they have been almost solely the product of senior historians who perceptively discussed the book’s long-term impact and the debates that surrounded it, both around its publication and in the immediate decades afterward. This Junto roundtable, “The Ideological Origins of the American Revolution at 50″ (#IOTAR50), aims to offer junior scholars a chance to reflect on this book’s impact on them and, by extension, its continuing significance and influence on the newest generation of early American historians. After all, perhaps the most impressive achievement of Ideological Origins is that fifty years after its publication it is still being read, assigned, and reckoned with by a new generation of scholars. Therefore, rather than rehashing what the book meant when it was published or what it has meant to historians living with it for decades, this roundtable is dedicated to exploring what the book means now. END_OF_DOCUMENT_TOKEN_TO_BE_REPLACED

Today, we are pleased to offer an interview with Dr. Ibram Kendi on his National Book Award winner, Stamped from the Beginning: the Definitive History of Racist Ideas. Kendi is an Assistant Professor of African-American History at the University of Florida, and Associate Editor of the African-American Intellectual History Society blog. You can find his blog posts here. END_OF_DOCUMENT_TOKEN_TO_BE_REPLACED