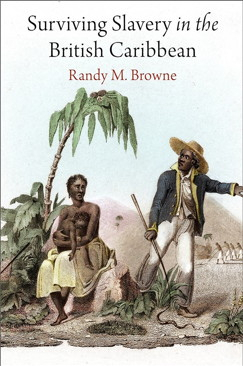 In the early Americanist community’s conception of #VastEarlyAmerica we constantly attempt to push the boundaries of what and where early America is. Randy M. Browne’s Surviving Slavery in the British Caribbean will appeal to proponents of a vaster early America in part because it pushes the geographical limits of early America. Browne’s study of slavery in Berbice (present-day Guyana), takes his readers to one of the most understudied slave societies in the Americas, to understand how enslaved Berbicians attempted to survive their bondage from the beginning of the nineteenth century in the Dutch period, to 1834 when British slavery ended. This is an important distinction from other studies of slavery which focused on understanding and fighting against notions of “agency” and “resistance” such as Marisa Fuentes’ prize-winning Dispossessed Lives: Enslaved Women, Violence, and the Archive, and Vincent Brown’s  2009 American Historical Review article “Social Death and Political Life in the Study of Slavery,” among others [1]. By contrast, instead of highlighting the voices of those in open rebellion, Browne focuses on those whom attempted to better their situation despite remaining under the yoke of bondage. Browne does this by accessing one of the most bountiful, yet underutilized, archival records of the voices of enslaved people [2]. Browne mines information about how enslaved Berbicians attempted to survive and carve out lives in one of the most oppressive slave regimes in the Americas. Whether describing the use of obeah as a spiritual defense mechanism to sustain themselves through the institution of slavery, the use of Black slave drivers, or how enslaved women and men attempted to sort out marital and partner discourses, Browne adeptly traces how enslaved Berbicians attempted to live, and most importantly, to survive, slavery. END_OF_DOCUMENT_TOKEN_TO_BE_REPLACED

2019 began with a bang when I traveled across the pond to become the first graduate student studying in the U.S. to present at the University of Oxford’s Early American Republic Seminar (OxEARS). Without the work of my new intellectual family members and OxEARS co-conveners, Grace Mallon and Stephen Symchych, along with the love, support, and prayers of my family and friends stateside, my overall experience at Oxford would not have been as amazing as it was. END_OF_DOCUMENT_TOKEN_TO_BE_REPLACED

How and why does a group in a society feel affection for the society they live in, despite the constant abuses faced by them? A great case study to help answer the question is through the anti-slavery movement. Boston abolitionist intellectual Maria Stewart, after the loss of both her husband, James Stewart and intellectual mentor, abolitionist David Walker in 1830, refocused her life on Jesus and fighting for her race. From that foundation, she met and collaborated with  upstart white abolitionist newspaper editor William Lloyd Garrison of The Liberator. Garrison was a major influence on Stewart’s public career because Garrison promoted Stewart as a voice of her people, and the Liberator offered her room to publicly debate the best policies for her race’s future. In one of Stewart’s published writings in the Liberator, she wrote about death to the body of the enslaved, that would also free the soul. “The blood of her murdered ones cries to heaven for vengeance against thee. Thou art almost drunken with the blood of her slain.[1]” The plunder of black bodies effectively built the United States, and based upon Stewart’s interpretation, America became drunk from its excess. END_OF_DOCUMENT_TOKEN_TO_BE_REPLACED

The meaning of the American Civil War has been, and still is, one of the most contentious issues facing the United States today. An aspect of the war that seems to be less spoken about though, was the role of Black women internationally during the Civil War. Wars of the scale of the American Civil War rarely lack an internationalist component. For the already internationalist American abolitionist movement, when the Civil War began in 1861, the abolitionist struggle shifted south with the work of women like Harriet Tubman and Charlotte Forten, but there were still important battles being waged internationally over the war and its meaning.

The Black woman who took the international abolitionist stage during the Civil War was Salem, Massachusetts’ Sarah Parker Remond. After having been in the British Isles for almost two years prior to the war, Remond’s abolitionist tour expressed a stronger sense of urgency, as the war provided a tangible arena for potential ending of slavery. While doing so, she developed notions of performative citizenship. Performative citizenship was an aspirational basis of struggle for realized citizenship based on Black abolitionist women’s proclamations of African-American identities. Those identities were based on economic and intellectual analyses of the central role their race’s plunder played in American economic growth. END_OF_DOCUMENT_TOKEN_TO_BE_REPLACED

In light of the recent tragic stories of family separation occurring on the Mexico-United States border, what instantly came to my mind was America’s history of dislocation through American slavery. From the United States’s conception, the place of the country’s Black population, enslaved and free, was centered in debates on who this country was ultimately built for. There were factions that saw slavery as antithetical to the founding principles of “freedom, liberty, and the pursuit of happiness.” During the Revolutionary War, even British orators like Samuel Johnson, clearly saw this dichotomy. In his 1775 pamphlet Taxation No Tyranny: An Answer To The Resolutions And Address Of The American Congress, Johnson juxtaposed the colonist’s “Declaration of Rights,” and equivocated “If [s]lavery be thus fatally contagious, how is it that we hear the loudest yelps of for liberty among the drivers of negroes.”[1] Not all factions of the founding generation decidedly occupied one camp of pro-slavery or anti-slavery though. America’s first and third presidents denoted this friction. Washington and Jefferson’s stories denoted both held surface level anti-slavery positions, yet also owned hundreds of bondswomen and men; very similar to what Johnson characterized. This complication stemmed from the generation’s refusal to resolve the “slavery question” that plagued the new nation. Political compromises, like the counting of enslaved peoples as three-fifths a person, prolonged America’s reckoning, but only temporarily. However, a middle ground emerged by the early 19th century: colonization. END_OF_DOCUMENT_TOKEN_TO_BE_REPLACED

Black men in early America strived for masculine recognition in their society which did not provide many opportunities for Black men to publicly present themselves as men. In 2007, through The William and Mary Quarterly, maritime historian W. Jeffrey Bolster published “Letters by African American Sailors, 1799-1814,” which is useful in examining how Black men performed masculinity to not only provide for themselves and their families, but also to provide opportunities to be recognized as men. In my first post for The Junto, I decided to focus on the life of one of the Black sailors involved in the letters named Jacob Israel Potter. As an early nineteenth century impressed, or captured, Black sailor from Lewes, Delaware by the British Royal Navy, conceptually speaking, the parameters of freedom were far different for him as a person of African descent than someone white. Generally, Black freedom was always in tension with Black mobility. Scholars like Elizabeth Pryor examine this tension in the lives of Black antebellum activists from the late 1820s until just before the Civil War, but this post, in part, examines this tension with the added caveats of how Black masculinity and Black patriotism coincided with this tension as well.[1] END_OF_DOCUMENT_TOKEN_TO_BE_REPLACED