A special edition of #ColonialCouture, a Junto roundtable on fashion as history in early American life.

Protective face coverings have emerged as a potent, multifaceted metaphor for the Covid-19 pandemic. Despite inconsistent examples set by elected leaders and conflicting recommendations made by public health officials, unisex masks have steadily assumed a greater role in social distancing measures and become mandatory in certain settings outside the home. Options range from standard blue and white surgical masks to creative DIY improvisations and “Corona Couture.” Some museums are looking to add homemade masks to their collections as a way to document the crisis. Worn for slightly different reasons and more implicitly gendered, the masks owned by early American women and even children were no less symbolic in terms of practical use, commodification, or controversy.

END_OF_DOCUMENT_TOKEN_TO_BE_REPLACED

2019 began with a bang when I traveled across the pond to become the first graduate student studying in the U.S. to present at the University of Oxford’s Early American Republic Seminar (OxEARS). Without the work of my new intellectual family members and OxEARS co-conveners, Grace Mallon and Stephen Symchych, along with the love, support, and prayers of my family and friends stateside, my overall experience at Oxford would not have been as amazing as it was. END_OF_DOCUMENT_TOKEN_TO_BE_REPLACED

The meaning of the American Civil War has been, and still is, one of the most contentious issues facing the United States today. An aspect of the war that seems to be less spoken about though, was the role of Black women internationally during the Civil War. Wars of the scale of the American Civil War rarely lack an internationalist component. For the already internationalist American abolitionist movement, when the Civil War began in 1861, the abolitionist struggle shifted south with the work of women like Harriet Tubman and Charlotte Forten, but there were still important battles being waged internationally over the war and its meaning.

The Black woman who took the international abolitionist stage during the Civil War was Salem, Massachusetts’ Sarah Parker Remond. After having been in the British Isles for almost two years prior to the war, Remond’s abolitionist tour expressed a stronger sense of urgency, as the war provided a tangible arena for potential ending of slavery. While doing so, she developed notions of performative citizenship. Performative citizenship was an aspirational basis of struggle for realized citizenship based on Black abolitionist women’s proclamations of African-American identities. Those identities were based on economic and intellectual analyses of the central role their race’s plunder played in American economic growth. END_OF_DOCUMENT_TOKEN_TO_BE_REPLACED

Black men in early America strived for masculine recognition in their society which did not provide many opportunities for Black men to publicly present themselves as men. In 2007, through The William and Mary Quarterly, maritime historian W. Jeffrey Bolster published “Letters by African American Sailors, 1799-1814,” which is useful in examining how Black men performed masculinity to not only provide for themselves and their families, but also to provide opportunities to be recognized as men. In my first post for The Junto, I decided to focus on the life of one of the Black sailors involved in the letters named Jacob Israel Potter. As an early nineteenth century impressed, or captured, Black sailor from Lewes, Delaware by the British Royal Navy, conceptually speaking, the parameters of freedom were far different for him as a person of African descent than someone white. Generally, Black freedom was always in tension with Black mobility. Scholars like Elizabeth Pryor examine this tension in the lives of Black antebellum activists from the late 1820s until just before the Civil War, but this post, in part, examines this tension with the added caveats of how Black masculinity and Black patriotism coincided with this tension as well.[1] END_OF_DOCUMENT_TOKEN_TO_BE_REPLACED

Jessica Blake is a PhD candidate in U.S. History at the University of California-Davis, where she is completing a dissertation entitled, “A Taste for Africa: Imperial Fantasy and Clothes Commerce in Revolutionary-era New Orleans.” She is currently a dissertation fellow at the Winterthur Museum and Archive. 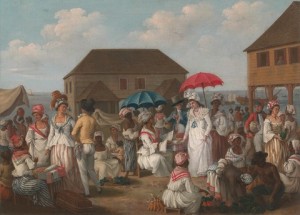 In 1808, the New Orleans trader John Joly placed an advertisement in the Moniteur de la Louisiane for a shipment of large Angola shawls (grands shals d’Angola), a rectangular cloth of African construction meant to drape over the shoulders. Joly marketed the cloth for the general consumer, making no indication that he considered it a product intended solely for use by enslaved or free people of color.[1]
END_OF_DOCUMENT_TOKEN_TO_BE_REPLACED

This is the fifth and final post in The Junto’s roundtable on the Black Atlantic. The first was by Marley-Vincent Lindsey, the second was by Mark J. Dixon, the third was by Kristin O’Brassill-Kulfan, and the fourth was by D. S. Battistoli. Ryan Reft is a Historian of Modern America in the Manuscript Division at the Library of Congress. He also writes for KCET in Los Angeles. His work has appeared in journals such as Souls, Southern California Quarterly, California History, and the Journal of Urban History, and the anthologies, Barack Obama and African American Empowerment and Asian American Sporting Culture.

When A Tribe Called Quest (ATCQ) dropped its final album We Got It From Here . . . Thanks 4 Your Service, for a generation of Americans who attended college in the 1990s, it hearkened back to Clintonian multiculturalism, Afrocentric rap groups of the Native Tongues movement (De La Soul, Black Sheep, Jungle Brothers, and ATCQ), and hazy apartment parties carried by the rhythms of hip hop and its variants. Though a thoroughly modern creation, hip hop like that of ATCQ results from the accretion of political, social, and cultural forms arising from the Black Atlantic; the transnational culture created by the intersection of European empires, slavery, and colonization from the 1600s forward. Birthed and nurtured by the Black Atlantic, hip hop is our countermemory to American exceptionalism and chauvinistic nationalism. END_OF_DOCUMENT_TOKEN_TO_BE_REPLACED

This is the fourth post in The Junto’s roundtable on the Black Atlantic. The first was by Marley-Vincent Lindsey, the second was by Mark J. Dixon, and the third was by Kristin O’Brassill-Kulfan. D. S. Battistoli is a rural development practitioner, working in West Africa and the Caribbean. He holds a B.A. in English literature from Binghamton University, and, since 2011, has more than a thousand days’ field experience among the Saamaka Maroons of Suriname, first as a Peace Corps Volunteer, and later independently.

Cynthia McLeod’s Hoe Duur Was De Suiker, published in 1987 in the middle of Suriname’s Interior War, was the country’s first bestselling novel and a sort of foundational myth for the Creole population of the country.[1] The book takes its name from Voltaire’s famous rejoinder from Candide, “C’est à ce prix que vous mangez du sucre en Europe.”[2] The plantation colonies of the Caribbean took turns being the richest, and also the most violent and exploitative toward the blacks who produced the wealth; for much of the eighteenth century, the distinction belonged to Suriname. END_OF_DOCUMENT_TOKEN_TO_BE_REPLACED

This is the third post in The Junto’s roundtable on the Black Atlantic. The first was by Marley-Vincent Lindsey, and the second was by Mark J. Dixon. Kristin O’Brassill-Kulfan holds a PhD in early American history from the University of Leicester and is Coordinator and Instructor of Public History at Rutgers University. She is currently completing a manuscript on vagrancy and indigent transiency in the early nineteenth century US.

The early modern Atlantic Ocean was traversed by countless seafarers with varying degrees of maritime experience, in varying degrees of (un)freedom. People used mobility, including travel by sea, to negotiate new identities for themselves, however precarious. END_OF_DOCUMENT_TOKEN_TO_BE_REPLACED 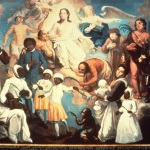 This is the second post in The Junto’s roundtable on the Black Atlantic. The first was by Marley-Vincent Lindsey. Mark Dixon is a PhD candidate in Church History at Princeton Theological Seminary writing a dissertation on the interaction and exchange between German Pietists and enslaved Africans in colonial South Carolina. He spent the past year (2015-16) as a Fulbright Graduate Fellow researching in Pietist archives in Halle and Herrnhut, Germany. He produces Church History Chat, a podcast featuring interviews with historians of Christianity, which will begin publishing episodes in February 2017.

If it sounds strange to speak of a German Atlantic in the first place, it must sound even stranger in a conversation dedicated to new scholarship and understandings of the Black Atlantic. After all, Germany was not an Atlantic colonial power, and German speakers were not as deeply involved in the slave trade as their British, Dutch, Portuguese, or Spanish neighbors. Indeed, Aaron Fogleman’s 2015 keynote lecture, “A German Atlantic, or Germans in the Atlantic?” delivered at the McNeil Center’s spring workshop, questioned the label’s usefulness for historians.[1] I want simply to assert the reality of the German Atlantic, and more importantly speak to its surprising utility for scholars interested in the experiences of Africans and people of African descent in the eighteenth-century Atlantic. In particular, the activities of German Pietists (and their surviving sources) can enrich Black Atlantic studies. END_OF_DOCUMENT_TOKEN_TO_BE_REPLACED

When Paul Gilroy wrote his now-classic critique of cultural nationalism in 1995, he conceived a Black Atlantic that was a geo-political amalgamation of Africa, America, the Caribbean, and Europe. Gilroy was particularly interested in the construction of a modern, post-colonial cultural space in which slavery remained a part of modern black consciousness. His book is particularly noted for the introduction of race as a critical consideration in exploring the Black Atlantic.

It is fitting then, that we kick off our week-long discussion of the Black Atlantic with a post by Marley-Vincent Lindsey, which explores considerations of race in the Iberian Atlantic. Subsequent posts will consider Black responses to freedom (and unfreedom), historical narrative, race, and of course, power. Marley-Vincent Lindsey is a PhD student at Brown University. He is interested in writing the history of a Medieval Atlantic, tracing connections of land and labor grants between fourteenth-century Iberia and sixteenth-century New Spain. He also writes about history and the web with Cyborgology, and can sometimes be found tweeting @MarleyVincentL. 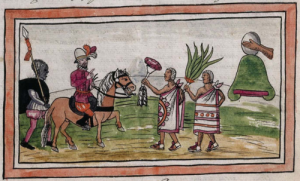 Juan Garrido was a typical conquistador: arriving in Hispaniola by 1508, Garrido accompanied Juan Ponce de León in his invasion of Puerto Rico, and was later found with Hernan Cortés in Mexico City. Yet his proofs of service, a portion of which was printed by Francisco Icaza in a collection of autobiographies by the conquistadors and settlers of New Spain, made a unique note: de color negro, or “of Black color.”[1] END_OF_DOCUMENT_TOKEN_TO_BE_REPLACED