Today, the Junto features a Q&A with Erik R. Seeman about his new book, Speaking with the Dead in Early America (University of Pennsylvania Press). Seeman is professor and chair of the history department at the University at Buffalo (SUNY) and the author of three other books on religion and deathways in early America and the Atlantic World. He has also published many articles and essays, including in the William and Mary Quarterly, Journal of the Early Republic, Journal of American History, and Church History. END_OF_DOCUMENT_TOKEN_TO_BE_REPLACED 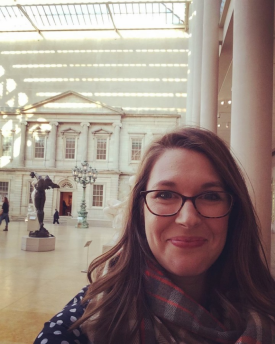 Today at The Junto, Philippe Halbert interviews Katherine Egner Gruber, who is Special Exhibition Curator at the Jamestown-Yorktown Foundation, a state agency that operates two living history museums in Virginia. This Q&A focuses on her most recent exhibition, Tenacity: Women in Jamestown and Early Virginia, which opened at Jamestown Settlement in November of 2018 and runs through January of 2020. She was also responsible for content oversight of the Yorktown American Revolution Museum‘s award-winning introductory film, Liberty Fever, and contributed to the development of new galleries that opened there in 2015. Kate earned a bachelor’s degree in historic preservation and classical humanities from the University of Mary Washington and a master’s degree in American history from the College of William and Mary. END_OF_DOCUMENT_TOKEN_TO_BE_REPLACED 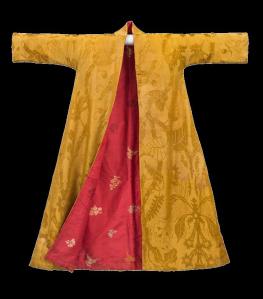 Today’s #ColonialCouture post is by Cynthia Kok, a doctoral student in art history at Yale University. She is interested in trade and craftsmanship under European colonial governance and imitative material practices inspired by encounters with foreign cultures.

“I like my money right where I can see it…hanging in my closet.” –Carrie Bradshaw

Centuries before New York became known as a fashion capital— and Carrie Bradshaw emerged as a style icon— the city’s colonial-era merchants anticipated the words of Sex and the City’s lead character by investing newly earned wealth in clothing made from luxurious fabrics. And, like today’s Rich Kids of Instagram, they documented their exclusive material success through portraiture. Painted at the turn of the eighteenth century, that of Isaac de Peyster (1662-1728), the son of an affluent Dutch-American mercantile family, presented both his physical features and a luxurious silk robe patterned with rocks and spindly vegetation. The artist captured the soft, luminous sheen of the gold silk and hinted at the robe’s lining with a flash of red along an upturned sleeve. END_OF_DOCUMENT_TOKEN_TO_BE_REPLACED

Working on material culture, my research has taken me to some interesting, if unexpected places. Last summer, it involved waiting outside Saint John’s Church in Portsmouth, New Hampshire, founded in 1732 as the Anglican Queen’s Chapel. I quickly ran inside to snap some pictures of a baptismal font between back-to-back Sunday services. The Saint John’s font is an impressive fixture, carved from marble in a Continental European baroque style. As a ritual object used in the sacrament of baptism, the font is hardly unusual, but its story is. END_OF_DOCUMENT_TOKEN_TO_BE_REPLACED 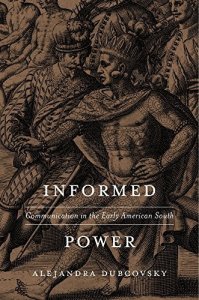 Alejandra Dubcovsky’s Informed Power: Communication in the Early American South is an ambitious book. She analyzes how information was communicated throughout the early South, a region that was without a regular mail system or print culture prior to 1730. The “early South,” as Dubcovsky acknowledges, is an “ambiguous” term (3). Her “early South” includes much of the lands from the Jamestown settlement south, and from the Mississippi River east. The result is a vibrant blend of Native American peoples, Africans, and European interactions that both complicate and enrich her analysis. Her sources include not only English, French, and Spanish, but also a number of Native American sources, including Timucua. She draws not only on written sources, but linguistic and archaeological evidence as well. This interdisciplinary approach allowed for broader inclusion of non-European networks than appears in many studies. Networks, as Dubcovsky defines them, are a “pattern of ties connecting discrete places or peoples”(4) She discusses a number of different types of networks—economic, political, religious, diplomatic, subaltern—but depicts all nodes as uniform in size. While some might take issue with this approach, the uniformness of the nodes makes sense, given the book’s goal of decentralizing European power structures, and does not detract. END_OF_DOCUMENT_TOKEN_TO_BE_REPLACED

Today’s guest post comes from Bryan Rindfleisch, Assistant Professor of History at Marquette University. Bryan received his Ph.D. from the University of Oklahoma, in 2014, where he specialized in early American, Native American, and Atlantic world history. His book manuscript focuses on the intersections of colonial, Native, imperial, and Atlantic histories, peoples, and places in eighteenth-century North America.

It’s inevitable. At some point, a friendly conversation about my research—with family and friends, colleagues, students, or even a random stranger at the local coffee shop—will take an unfortunate turn. All it takes is that one question: “Who is George Galphin?” END_OF_DOCUMENT_TOKEN_TO_BE_REPLACED

Andrew Beaumont has written a provoking biography of George Montagu Dunk, second earl of Halifax (1716–1771) that covers the crucial period between 1748 and 1761. This book offers a re-evaluation of how we understand colonial American politics and, by implication, it forces us to reconsider the origins of the American Revolution.It also reorients our understanding of British figures who wanted to centralize the Empire during the eighteenth century. For Beaumont, we should look less at the familiar cast of characters: George Grenville; the Earl of Bute; William Pitt, later Lord Chatham; and Lord North. There are others, of course. But, we are familiar with these men. We know their stories. We know their contributions. Beaumont does not argue that we should look away from these men. Rather, he argues that we should look at other “ambitious men” and how they affected the British Empire. In this book, Beaumont examines the “Father of the Colonies,” the Earl of Halifax. END_OF_DOCUMENT_TOKEN_TO_BE_REPLACED