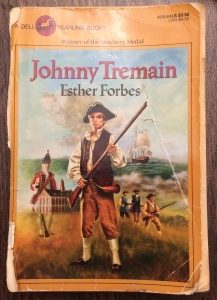 More than anything else, people remember the hand. Bring up Johnny Tremain in a group of adults, and for those who read it, they’re most likely to remember the disfigurement that serves as the hinge for much of the novel’s plot, the story within the story of the coming of the Revolution in Boston. A few people have told me that the hand by itself made the book unpalatable; for my part, it always served as a matter of fascination. And it’s one of two things that most stand out for me about the novel (the other being that it was the first place I heard that Biblical injunction that “pride goeth before fall;” make of that what you will). END_OF_DOCUMENT_TOKEN_TO_BE_REPLACED

Alejandra Dubcovsky’s Informed Power: Communication in the Early American South is an ambitious book. She analyzes how information was communicated throughout the early South, a region that was without a regular mail system or print culture prior to 1730. The “early South,” as Dubcovsky acknowledges, is an “ambiguous” term (3). Her “early South” includes much of the lands from the Jamestown settlement south, and from the Mississippi River east. The result is a vibrant blend of Native American peoples, Africans, and European interactions that both complicate and enrich her analysis. Her sources include not only English, French, and Spanish, but also a number of Native American sources, including Timucua. She draws not only on written sources, but linguistic and archaeological evidence as well. This interdisciplinary approach allowed for broader inclusion of non-European networks than appears in many studies. Networks, as Dubcovsky defines them, are a “pattern of ties connecting discrete places or peoples”(4) She discusses a number of different types of networks—economic, political, religious, diplomatic, subaltern—but depicts all nodes as uniform in size. While some might take issue with this approach, the uniformness of the nodes makes sense, given the book’s goal of decentralizing European power structures, and does not detract. END_OF_DOCUMENT_TOKEN_TO_BE_REPLACED

William J. Gilmore’s Reading Becomes a Necessity of Life is an odd book. Published by University of Tennessee Press in 1989, it was not particularly well reviewed—its oddness frustrated readers. Gilmore set out to “learn how the American version of modern civilization began to influence the lives of the overwhelming majority of rural Americans” by making a fine-grained, comprehensive study of the reading, purchasing, and—less comprehensively—thinking habits of the people who lived in the Upper Connecticut River Valley between 1780 and 1835 (xx). Along the way, there are references to contemporary events Iran and Iraq, Isaac Asimov, corn-husking frolics, and the meaning of human happiness. Paul Johnson, with characteristic precision and wit, summarized the book’s problems in his JAH review (September 1990): END_OF_DOCUMENT_TOKEN_TO_BE_REPLACED