Right after I agreed to review Sam Haselby’s The Origins of American Religious Nationalism for the Journal of Religion, Gordon Wood’s review of it appeared in the New York Review of Books. When one of our number gets that kind of exposure with their first book, we should all applaud, but there I was, feeling out-classed before I even opened the book. Now that I’m done with my review, everything about Wood’s makes sense to me—it was big exposure on a big stage for a big book. And I learned something from Wood there, which was to have enough patience with a big book’s faults to appreciate what it’s trying to do. Wood called Origins an “unusual book” with a meandering argument, but nevertheless “a book to be reckoned with.” I have to agree, and (spoiler alert) said as much in my forthcoming JR review. In writing that, though, I realized that if I hadn’t been primed for indulgence by Wood’s review I would have judged Origins more harshly. I think Origins is a good book that’s in too much of a hurry. Without repeating what I’ve written in JR for a religious-studies audience, I want to use this space for something of an historian’s rant about the hurried use of sources in this book. END_OF_DOCUMENT_TOKEN_TO_BE_REPLACED

At the beginning of February, Wake Forest University hosted a symposium marking the 25th anniversary of the publication of Nathan Hatch’s The Democratization of American Christianity (Yale University Press). The list of participants was a “who’s-who” of American religious history: Catherine Brekus, Sylvester Johnson, Mark Noll, Amanda Porterfield, Harry Stout, Grant Wacker (on more of a “who’s-that?” note, I was there, too, feeling honored but absurdly under-credentialed in that company). Each offered reflections on the book’s influence and reach, on his or her personal experience with it, on how its arguments have aged. Hatch, now the president of Wake Forest, offered an eloquent response. (Video of the event is available here.) END_OF_DOCUMENT_TOKEN_TO_BE_REPLACED

I’ll just admit it: Freemasonry is one of those things in American history that I have trouble getting my head around. I suppose I understand the importance of guy-time, but many of my closest friends are women. The very idea of secret societies, with initiations and special rings, just seems boyish to me. I would suppose that the boyishness is the point–a search for wonder and enchantment and all of that–except that early in the nineteenth century the Masons banned alcohol at meetings: no stein hoists here. The largest group at midcentury actually required its members to be teetotalers, making enchantment a much harder sell, for my money. More to the point, in the same period enchantment without booze could be had at a Methodist camp meeting, which seems like it would have been quite a lot more interesting, what with women there. END_OF_DOCUMENT_TOKEN_TO_BE_REPLACED

Tomorrow at the Library Company of Philadelphia, I’ll be participating in a special edition of the McNeil Center for Early American Studies’ Friday seminar reflecting on five years of the Mellon Early American Literature and Material Texts Initiative. The Initiative began in 2009 as an effort to get early Americanists taking a material-texts approach to their research to step out of their respective fields and into a general conversation about the methods, theory, and potential of that approach. Over the course of five years, the initiative has provided funding for ten dissertation fellows to be in residency at the McNeil Center and make use of the tremendous resources of the Library Company and other area archives. In addition, the Initiative has contributed funding to conferences and sponsored a workshop each summer bringing together both junior and senior scholars to discuss their work and the trajectories of material-texts research. For Friday’s seminar, four former material-text fellows will discuss short selections of our current work and how our experiences in the Initiative have affected it.  END_OF_DOCUMENT_TOKEN_TO_BE_REPLACED

Once upon a time there was a story that was about . . . well, it was maybe about a lot of things, like frustrated masculinity, or colonialism, or early-national political uncertainties, but it was definitely not about a guy on a horse who really did not have a head. Or about his three companions, the other three horseman of the apocalypse. Or about the occult purposes of the Boston Tea Party. Or George Washington’s bible. The lost colony of Roanoke? Also no. And then that story was given a “modern-day twist” so as to be about all of those things. But the scary part is that the result is … fun. Even to an historian. END_OF_DOCUMENT_TOKEN_TO_BE_REPLACED

I hope that Thomas Jefferson’s Qur’an: Islam and the Founders (New York: A. A. Knopf, 2013) gets picked up for a Fox News segment. Denise A. Spellberg (UT-Austin) has synthesized a large body of scholarship into a readable, teachable, and thoughtful look at the significance of Islam in the American founding era. Conservatives pounced on Spellberg during a dust-up over a novel about Muhammad’s wife a few years ago, and in this book she suggests both that the Founders were occasionally wrong and that some of them believed Islam could have its place in the American polity. So it seems possible to hope that the usual suspects will take notice. She deserves the publicity. END_OF_DOCUMENT_TOKEN_TO_BE_REPLACED

Last week, the Library Company of Philadelphia and the McNeil Center for Early American Studies hosted the Early American Literature and Material Texts Workshop, generously sponsored for the fifth time by the Andrew W. Mellon Foundation.  Led this year by Meredith McGill, the workshop offers a chance each summer for some material-texts scholars to get together and talk about their work and reflect on what attention to the material conditions of texts can bring to the study of, primarily, history and literature.  This year there was a particular focus on materiality as it relates to how we think about form and genre–we had great sessions on nineteenth-century autobiography as a genre, P.T. Barnum, the print transmission of colonial media narratives, and the meaning of format from manuscript to magazine to mp3.  It’s always humbling and exciting to glimpse the high level on which other scholars are thinking about some of the things I’m interested in. END_OF_DOCUMENT_TOKEN_TO_BE_REPLACED

My wife is a knitter, and she’s explained to me the subtle difference observed, among those in her guild, when referring to someone’s work as “handmade” or “homemade.”  Both acknowledge the difference between the sweater you spent months on and something mass-produced.  The former, though, implies that for the piece in question that difference is measured in care and craftsmanship, while the latter measures it in imperfections.  It’s the difference between, “You made that yourself?!” and “You made that yourself, huh?” END_OF_DOCUMENT_TOKEN_TO_BE_REPLACED 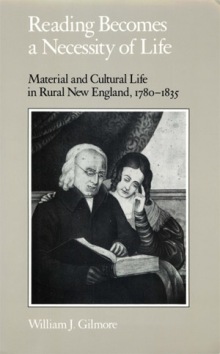 William J. Gilmore’s Reading Becomes a Necessity of Life is an odd book. Published by University of Tennessee Press in 1989, it was not particularly well reviewed—its oddness frustrated readers. Gilmore set out to “learn how the American version of modern civilization began to influence the lives of the overwhelming majority of rural Americans” by making a fine-grained, comprehensive study of the reading, purchasing, and—less comprehensively—thinking habits of the people who lived in the Upper Connecticut River Valley between 1780 and 1835 (xx). Along the way, there are references to contemporary events Iran and Iraq, Isaac Asimov, corn-husking frolics, and the meaning of human happiness. Paul Johnson, with characteristic precision and wit, summarized the book’s problems in his JAH review (September 1990): END_OF_DOCUMENT_TOKEN_TO_BE_REPLACED

Some friends asked me last week how I felt, as an historian, about the current assault on the teaching of cursive in public schools, and I had to admit that I didn’t know this was a thing. Long story short, with classroom time always at a premium, many school districts have replaced instruction in cursive writing with instruction in typing, the latter seemingly more relevant to our times. Apparently, concern over students’ resulting inability to read or write script has been growing for a while, but a Wall Street Journal story at the end of January brought the issue new prominence. Many people seem to think that continuing to teach students to write in cursive is important, and a handful of state legislatures have introduced bills to rectify the situation.

The question has a neat resonance with the history of education: writing may go back to being thought of pedagogically as a craft, just as it was before the nineteenth century, when it was something that boys learned while girls learned to sew. (See, in particular, E. Jennifer Monaghan’s work on this history). Beyond that, though, two central pieces of the “save cursive” argument resonate with historical questions. END_OF_DOCUMENT_TOKEN_TO_BE_REPLACED