Guest posters Richard Calis and Madeline McMahon are graduate students in the History Department at Princeton University. Along with Frederic Clark, Anthony Grafton, and Jennifer Rampling, they are part of a collaborative research project (@WinthropProject) studying how multiple generations of Winthrops read, annotated, and acquired books on both sides of the Atlantic.

John Winthrop (1588-1649) and his son John Winthrop Jr. (1606-1676) are now known primarily as protagonists in the turbulent political history of early America. But in addition to shaping the government and theology of New England as governors of Massachusetts Bay and Connecticut (respectively), they and the rest of the Winthrop family also participated in a transatlantic and inter-generational bookish culture. Long before the Arbella sailed to Boston in 1630 to build a “city upon a hill”, generations of Winthrops began to talk about books, ways to read them and, as we will illustrate here, the difficulties and contingencies of collecting them—on both sides of the Atlantic. END_OF_DOCUMENT_TOKEN_TO_BE_REPLACED 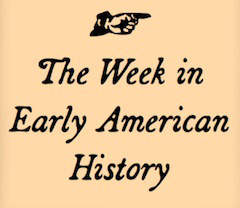 Tomorrow at the Library Company of Philadelphia, I’ll be participating in a special edition of the McNeil Center for Early American Studies’ Friday seminar reflecting on five years of the Mellon Early American Literature and Material Texts Initiative. The Initiative began in 2009 as an effort to get early Americanists taking a material-texts approach to their research to step out of their respective fields and into a general conversation about the methods, theory, and potential of that approach. Over the course of five years, the initiative has provided funding for ten dissertation fellows to be in residency at the McNeil Center and make use of the tremendous resources of the Library Company and other area archives. In addition, the Initiative has contributed funding to conferences and sponsored a workshop each summer bringing together both junior and senior scholars to discuss their work and the trajectories of material-texts research. For Friday’s seminar, four former material-text fellows will discuss short selections of our current work and how our experiences in the Initiative have affected it.  END_OF_DOCUMENT_TOKEN_TO_BE_REPLACED

Today’s guest poster, Aaron M. Brunmeier, recaps the recent conference in Liverpool, England. He is a Ph.D. student at Loyola University-Chicago, where he studies print culture, gender, and the public sphere in revolutionary New York City. He is the social media assistant for the Community Libraries Network. 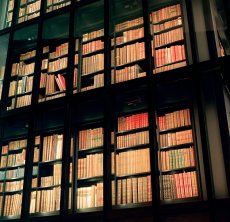 Last week, I finished my minor field exams, lesson-planned for my substitute teacher, and then hopped on a plane headed toward Liverpool for a conference on library history. It was the first of three colloquia organized by the Community Libraries Network and funded by the AHRC. This colloquium, “Libraries in the Atlantic World,” brought scholars of different disciplines from all around the world to share their research and discuss the newest trends in the field at the University of Liverpool, 24-25 Jan. 2014.

END_OF_DOCUMENT_TOKEN_TO_BE_REPLACED

Today’s guest poster is Ariel Ron, who earned his PhD in history at the University of California, Berkeley, and is currently a visiting research associate at the McNeil Center for Early American Studies. 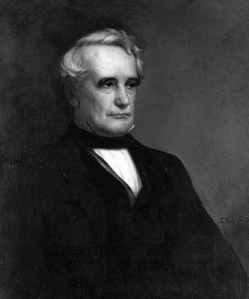 Three or four years ago, while doing research at the University of Pennsylvania’s Rare Book & Manuscript Library, I stumbled upon a lost cache of some ten-thousand pamphlets. I had been browsing the papers of Stephen Colwell, a nineteenth-century ironmaster and writer, when archivist John Pollack called me into the closed stacks behind the reading room. There he showed me Colwell’s personal pamphlet library, neatly bound into hundreds of volumes. The collection also included three thousand works from the library of Colwell’s friend, Henry C. Carey (see picture to right), without question the most important American political economist of the mid-nineteenth century. The sheer size of the corpus floored me. END_OF_DOCUMENT_TOKEN_TO_BE_REPLACED

Last week, the Library Company of Philadelphia and the McNeil Center for Early American Studies hosted the Early American Literature and Material Texts Workshop, generously sponsored for the fifth time by the Andrew W. Mellon Foundation.  Led this year by Meredith McGill, the workshop offers a chance each summer for some material-texts scholars to get together and talk about their work and reflect on what attention to the material conditions of texts can bring to the study of, primarily, history and literature.  This year there was a particular focus on materiality as it relates to how we think about form and genre–we had great sessions on nineteenth-century autobiography as a genre, P.T. Barnum, the print transmission of colonial media narratives, and the meaning of format from manuscript to magazine to mp3.  It’s always humbling and exciting to glimpse the high level on which other scholars are thinking about some of the things I’m interested in. END_OF_DOCUMENT_TOKEN_TO_BE_REPLACED