The world was a strange and startling place for Rip Van Winkle when he awoke from a twenty-year nap in New York’s Catskill Mountains. He had ventured to the woods to find a moment’s peace from “the labour of the farm and the clamour of his wife.”[1] Now well rested, bountifully bearded, and slightly disoriented, Van Winkle returned to his village anxious to understand the changes that left him “alone in the world,” but pleased that he was now part of a “more fraternal, organic domestic order.”[2] In the time since his fateful game of ninepins mixed with moonshine, Van Winkle, along with his male village compatriots, was now free to exercise his own masculine alternatives to traditionally female forms of domesticity. Maura D’Amore opens her book Suburban Plots: Men at Home in Nineteenth-Century American Print Culture with this unconventional reading of Washington Irving’s well-known tale. Seeking to understand the emergence of what she terms “male domesticity” in the nineteenth century—defined (somewhat inconsistently) as an ideology of “self-nurture in suburban environments [that provided] an antidote to the malaise of urban life and the strictures of feminine self-sacrifice”—D’Amore presents Rip Van Winkle as a prototype of various middle- and upper-class men who attempted to implement domesticity “on [their] own terms” in the midst of a quickly industrializing and alien world.[3] END_OF_DOCUMENT_TOKEN_TO_BE_REPLACED

Once upon a time there was a story that was about . . . well, it was maybe about a lot of things, like frustrated masculinity, or colonialism, or early-national political uncertainties, but it was definitely not about a guy on a horse who really did not have a head. Or about his three companions, the other three horseman of the apocalypse. Or about the occult purposes of the Boston Tea Party. Or George Washington’s bible. The lost colony of Roanoke? Also no. And then that story was given a “modern-day twist” so as to be about all of those things. But the scary part is that the result is … fun. Even to an historian. END_OF_DOCUMENT_TOKEN_TO_BE_REPLACED 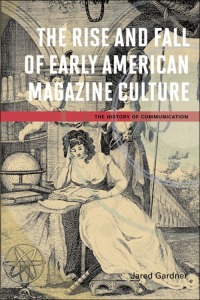 Almost by definition, studying communications media means examining the nature of rationality and the meaning of citizenship. So literary historians generally see the novel, which privileges dialogue and individual subjectivity, as helping to constitute a liberal social order, while political historians see newspapers as essential to various expressions of republicanism and democracy. In The Rise and Fall of Early American Magazine Culture, Jared Gardner contributes to the history of American citizenship by arguing that early-national American literary intellectuals mostly had their minds on a different print medium – and that they embraced a neglected model of rational public discourse.