As 2018 comes to a close, I can’t help but reflect on this year and its meaning for a place that has become near and dear to my heart (and in-progress dissertation): New Orleans. Founded by the French in 1718, Louisiana’s largest city has been celebrating its tricentennial for months and in a way that only New Orleans can. Ranked number one on the New York Times “52 Places to Go in 2018” list, New Orleans continues to attract first-timers curious to discover “America’s most foreign city.” Repeat visitors, myself included, just can’t get enough, although my trips have taken me beyond Bourbon Street, from the attic of the city’s colonial-era Ursuline convent to the notarial archives of Orleans Parish, hidden within a twenty-story office building a stone’s throw from the Superdome. My own excursions aside, how exactly have we gone about celebrating, remembering, and thinking about the history of early New Orleans in 2018? What does the future hold?

END_OF_DOCUMENT_TOKEN_TO_BE_REPLACED

This Colonial Couture post is by Laura E. Johnson, associate curator at Historic New England. The exhibition Mementos: Jewelry of Life and Love from Historic New England, which she curated, will open at the Eustis Estate Museum in Milton, Massachusetts, in May 2017. 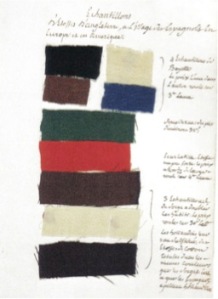 I’d like to build on Kimberly Alexander’s question from last week, “How can we write history when we do not have the original object?” There are many ways to examine a textile and its context without the physical object, as she demonstrated so ably. Much of my research on Native peoples, identity construction, and the Atlantic textile trade is based by necessity on a combination of archival resources, rare portraits, and archaeological evidence. Trade records, price lists, descriptions of treaty meetings, and other archival sources offer a wide range of evidence about textiles and how Natives consumed them, even in the absence of the pieces themselves.

Textiles were among the most lucrative and desirable of imported objects in the early Atlantic economy.[1] The French, Dutch, and British all relied heavily on textile production for a substantial portion of their national revenue. Woolens and linens raised, spun, woven and finished in these areas drove international commerce from the 13th century.[2] Native Americans presented an enormous potential market for their products as the domestic market became increasingly saturated. As one scholar has stated, it could have been termed the “cloth trade as easily as the deerskin trade.”[3] END_OF_DOCUMENT_TOKEN_TO_BE_REPLACED

Jennifer Goloboy is a literary agent at Red Sofa Literary in St. Paul, MN. She has a PhD in the history of American civilization from Harvard University, and has published articles on merchants and the early American middle class. Her book, Charleston and the Emergence of Middle-Class Culture in the Revolutionary Era, will be published by University of Georgia Press on October 10.

As the new history of capitalism reminds us of the immense wealth that traveled through antebellum cotton ports, an old analytical problem remains—why didn’t Southern merchants invest in their communities, in the manner of the Boston Associates? Historians have traditionally explained that this lack of investment was caused by Southern culture: the Southern commitment to slavery, shared by its mercantile class, mandated a conservative approach to economic investment and a fear of change. For example, Scott P. Marler’s recent book on merchants in New Orleans claimed that “in the context of the slave society in which they were deeply implicated, their peculiar market culture discouraged the investments necessary for the city to modernize its economic base,” such as manufacturing and railroad-building.[1]

END_OF_DOCUMENT_TOKEN_TO_BE_REPLACED

Today’s guest post comes from Bryan Rindfleisch, Assistant Professor of History at Marquette University. Bryan received his Ph.D. from the University of Oklahoma, in 2014, where he specialized in early American, Native American, and Atlantic world history. His book manuscript focuses on the intersections of colonial, Native, imperial, and Atlantic histories, peoples, and places in eighteenth-century North America.

It’s inevitable. At some point, a friendly conversation about my research—with family and friends, colleagues, students, or even a random stranger at the local coffee shop—will take an unfortunate turn. All it takes is that one question: “Who is George Galphin?” END_OF_DOCUMENT_TOKEN_TO_BE_REPLACED

END_OF_DOCUMENT_TOKEN_TO_BE_REPLACED

Here’s our seasonal roundup of new and forthcoming titles. Share your finds below!  END_OF_DOCUMENT_TOKEN_TO_BE_REPLACED

He was, at first, another young shadow hurrying through Westminster Hall. He carried flimsier credentials than most, papers hastily sent by a new nation called the Confederate States of America. It was November 1862, and, since spring, he had stretched expenses to accommodate the bare $750 granted to fund his secretive mission. Still, regular sightings of the worn, 29 year-old Swiss-American stranger, who had shipped to London via the fiery newsrooms of Richmond and Mobile, caused a flutter of concern among British peers. Within weeks, the constant American shadow near Parliament became a very real worry. “He is but a private gentleman, it is true,” one M.P. fretted, “yet he may leave his card at the Foreign Office, and possibly find his way upstairs.” END_OF_DOCUMENT_TOKEN_TO_BE_REPLACED