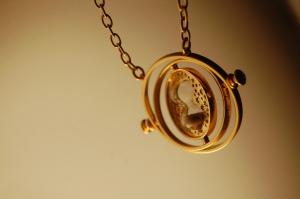 I feel like I’m writing more than a few pieces lately that start with “I love [X], BUT . . .” and apparently today is no different. I’ll just come out and say it: I love Harry Potter, but I have trouble with J. K. Rowling’s treatment of history. Harry Potter was immensely important to my young adulthood. I read the books as a teenager, went to more than one midnight movie release, bought and consumed Bertie Bott’s Every Flavour Bean, and dressed as a character from the books for Halloween.[1] I tend to re-read the novels once a year, when I’m looking for ways to improve my ability to tell a story. I wasn’t a historian when I first started reading the books, so I didn’t look too critically at Rowling’s characterizations of history and historians. Now that I am a historian, I’ve come to the conclusion that although Rowling’s portrayal of our discipline is wrong, her depiction of the wizarding world’s past—and how people interpret and at times attempt to change and revise it—is much more in keeping with the task that muggle historians daily confront. END_OF_DOCUMENT_TOKEN_TO_BE_REPLACED