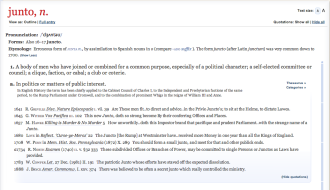 Back in 2012, when the initial ideas for this blog were first being thrown around, I suggested the name The Junto. I did so, not least because working at the Franklin Papers tends to keep Franklin on the brain. But I also suggested the name because the blog seemed to me to be analogous to the original group in that it was started by a bunch of upstarts with the intent of creating intellectual discourse amongst a supportive and engaged community. And those were the two most important initial goals of the blog. At the time, I never anticipated that there would ever be any confusion as to how to pronounce the name. That may have been a good thing since I probably would not have suggested it otherwise (“pronouncability” being pretty important when it comes to naming things, apparently). So, you might ask: “What is the correct pronunciation?” Well, that’s the thing. There doesn’t seem to be one, at least not nowadays. So, in a hopeful effort to settle the question, I decided to try to find out how people in the eighteenth century pronounced “Junto.” END_OF_DOCUMENT_TOKEN_TO_BE_REPLACED