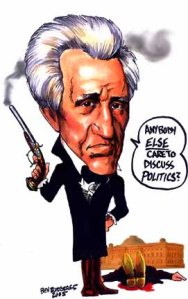 Jackson would obviously have won any physical competition, likely by cheating, but will any books dealing with Jacksonian America win the historiographical tournament?

In honor of the NCAA Tournament games tipping off in a few hours, and in reaction to the recent announcement of Bancroft Prize winners (which tragically did not include any book explicitly dedicated to early America), we here at the Junto decided to jump in on the competition atmosphere with brackets of our own: a several-bracket-tournament of books in early American history. Today, we submit competitors. The Junto team will then narrow the field to either 32 or, if we get enough submissions, 64, and rank them in brackets. (The organization of brackets is still up in the air—we could go with thematic regions like political, cultural, religious, and synthetic, or we could even go chronological with colonial, revolutionary, early republic, or Civil War-era, or we could even go with histiographical eras—and largely depends on the submissions. We are very open to suggestions, though, so please chime in in the comments!)

IMPORTANT NOTICE: The beauty of this competition depends on being fun, so the first and most important rule is not to take it too seriously. Deciding the winner is purely subjective and based on what are likely a widely variegated criteria of excellence including, but not limited to, most influential, best-written, most sophisticated, or even most popular. When in question, go with your gut reaction. Or, just go with your favorite. A debate between Laurel Ulrich’s A Midwife’s Tale and Eric Foner’s The Fiery Trial is, of course, silly, because both books can be categorized as the top of the field yet they examine completely different issues through very different approaches. But it is, nonetheless, fun to compare, debate, and, indeed, vote. This is designed to be fun, people, so once again: DO NOT TAKE THIS SERIOUSLY. (But we still expect the winner to add this great accolade to the top of her/his C.V.)

Once again, today we nominate books; tomorrow we start voting. Here are your rules for adding submissions in the comments below:

To get things started, I will offer my five submissions:

(Close runners-up, though I could certainly name many, include Taylor’s William Cooper’s Town, Foner’s The Fiery Trial, and Ely’s Israel on the Appomattox. And I ended up not going with classics like Beard’s Economic Origins of the American Constitution, Miller’s Errand Into the Wilderness, or Bailyn’s Ideological Origins of the American Revolution, but those should definitely be considered.)

Your turn. What are your suggestions for the brackets?