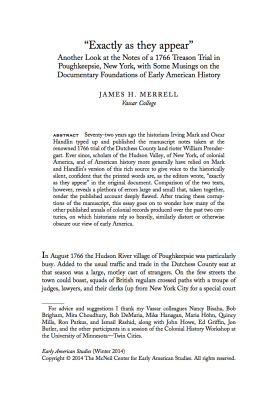 Many of us have been there. Sitting in front of our computers, we fret over how we will find the time and funding to examine important manuscript sources at faraway archives. And then, a few keystrokes later, we find that those sources are available in published form. Relief floods over us, replacing anxiety. But should we really be so relieved?

James H. Merrell’s recent article in Early American Studies asks exactly this question. Entitled “‘Exactly as they appear’: Another Look at the Notes of a 1766 Treason Trial in Poughkeepsie, New York, with Some Musings on the Documentary Foundations of Early American History,” it suggests that we should not be so quick to assume that published versions of manuscript sources faithfully reproduce the originals. [1]

Merrell’s article has potentially important implications for historians of early America, and The Junto will be considering them in a roundtable this week.[2] On Tuesday, Michael Hattem will weigh in from a contemporary documentary editing perspective. Rachel Herrmann will respond on Wednesday, reflecting on her experiences finishing her dissertation and beginning to revise her book manuscript.

Merrell’s article is, paradoxically, at once impressively narrow and incredibly broad. The majority of the essay considers the 1766 treason trial of William Prendergast, who joined his fellow Poughkeepsie, New York residents in violently protesting against unfavorable terms instituted by the region’s landlords.

Merrell painstakingly compares two versions of the notes that someone, likely a clerk, recorded during Prendergast’s trial. One version is the original manuscript, “Notes on July Assizes, 1766,” held by the New-York Historical Society. The other is a reprinting by historians Irving Mark and Oscar Handlin, published in the January 1942 issue of the New York University Law Quarterly Review, which purportedly presented the notes “in their entirety exactly as they appear” (205).

Merrell uncovers an “epidemic of errors” in the 1942 reprinting, including infidelities in spelling, punctuation, and phrasing (216). In his conclusion, Merrell hedges on the significance of his findings. Observing that the published account is not consistently more or less favorable to Prendergast than the original, Merrell states that he is neither “insisting that more accurately rendered texts would necessarily alter in fundamental ways our understanding” of the trial nor “saying it would not change our understanding” (232). Yet he ultimately questions the accuracy of published editions, asking “Are we building our interpretive houses on sand?” (237).

In my view, Merrell’s article can be read in one of two ways. On the one hand, his article contributes to the broad, ongoing call to “Get to the archives!” A similar message emerged from this past Friday’s McNeil Center Seminar, “The Mellon Early American Literature and Material Texts Initiative: Reflections Five Years On” (which Seth Perry previewed in this post). There, four former and current EALMT fellows insisted that texts convey meaning not merely through the content of their words, but also through their physical form—in other words, through features such as binding, paper quality, marginalia, paratextual material, and citation practices.

Merrell’s article does not deeply engage in the kind of analysis urged by the EALMT fellows—in fact, he describes the original manuscript as a “loosely bound notebook” only in passing—yet his methods are complimentary (204). In one of the article’s most powerful sections, Merrell observes that the reprinting of the Notes obscures how the 1766 author added corrections and elaborations between his original lines. In this way, the 1942 version’s “failure to capture the rough quality of that narrative steals some of its potential as a source in exchange for bogus clarity” (220). Similar arguments could be made for a wide range of manuscript sources, from letters to financial accounts: seeing the messiness of the handwritten page makes clear how authors fashioned and re-fashioned their texts as they wrote.

On the other hand, Merrell’s arguments could be cut down to size in several different ways. Here, I’d like to focus on just one way to do this, leaving others for Michael and Rachel to suggest. The records of trials and similar judicial inquiries arguably present a distinctive set of challenges. First, trials and judicial inquiries are particularly concerned with opposing categories, often guilt and innocence. As Michael Johnson’s work on Denmark Vesey reminded us, historians risk replicating the views of the powerful—in other words, of the individuals who administered and recorded such proceedings—if they fail to carefully interrogate legal sources.[3]

Relatedly, as often as we wish it were otherwise, there were no stenographers in early American courtrooms. Witness depositions and trial notes (such as those from Prendergast’s trial) offer tantalizing glimpses of eighteenth-century speech, but, unlike modern transcripts, they do not record it word-for-word. In other words, it is perhaps particularly problematic to rely on printed versions of court records, as even their manuscript versions contain many layers of mediation and tempt readers to interpret them as statements of fact.

In the end, I read Merrell’s article as an important cautionary tale: when relying on printed versions of manuscript sources, we should consider when and how those editions were produced, and how important they are to our overall arguments.

Nonetheless, the gulf between Merrell’s fine-grained analysis and his sweeping conclusions remains vast. As such, it invites debate. What role should printed editions of manuscript sources play in historical research, and do Merrell’s findings alter your views? As we continue our roundtable, we invite you to join in our discussion of these issues.

[1] James H. Merrell, “‘Exactly as they appear’: Another Look at the Notes of a 1766 Treason Trial in Poughkeepsie, New York, with Some Musings on the Documentary Foundations of Early American History” Early American Studies 12, no. 1 (Winter 2014): 202-237.