So you know what’s hilarious? Trying to revise your dissertation into a book during the semester. I will admit that I am in the middle of editing my worst dissertation chapter, and am yelling out of a metaphorical pit of despair that’s been dug by a combination of bad prose and end-of-the-semester angst. Part of these struggles have to do with the fact that even after writing the chapter, submitting it, and defending it, I’m still not really sure what this chapter’s argument needs to say. This problem is directly tied to the fact that I found (and continue to find) myself befuddled by late-eighteenth-century Southern Indian affairs. So many factions! So much switching of sides! So many different ways I manage to mis-type Scots-Creek go-between Alexander McGillivray’s last name![1]

What I think that I’m trying to say in this chapter is that looking at food lends logic and a discernible shape to the violence breaking out in present-day North Carolina, South Carolina, Virginia, and especially Georgia. To some extent, I’m trying to start solving my problem of explaining violence by going back to the canonical works on Southern Indian affairs, as well as violence in the South more broadly.[2] In the main, however, what I’ve realized is how much I still don’t know about Indian loyalties. Without knowing these things, it’s impossible to begin to guess why violence occurred.

Perhaps not surprisingly, I’ve gone a bit old school in an attempt to solve this quandary. I initially decided to create a simple word chart of Southern Indian allegiances. Then I laughed at myself for calling it simple. What Britons and Americans thought of these loyalties was oftentimes drastically different from what Indians thought (while keeping in mind that it’s nearly always impossible to guess what Indians thought). My chart, consequently, has grown into something a bit more unwieldy—it’s now over twenty-five pages. 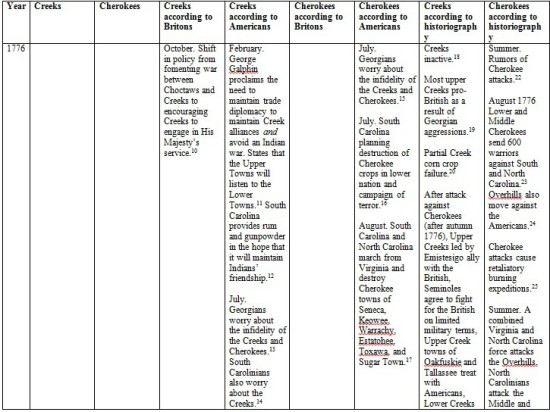 I’m still trying to figure out precisely what I’m trying to say, but the process as a whole has been useful for ruminating on this messy process of revising the dissertation. I am deeply ashamed of the fact that I’ve resorted to endnotes rather than footnotes in an attempt to keep the table more readable, but some of the mess needed containment. I have only recently warmed to the idea of editing—I think because it’s still difficult for me. I have rarely found it difficult to write. The problem, I’m increasingly realizing, is that my tendency to write lots does not equate to a tendency to write well. I wrote many, many, many crappy paragraphs in that dissertation. This effort to track Indian loyalties is just as much an effort on my part to slow my own roll as it is to produce something that will make it into the book.

So that’s me, weighing in on this murky editing adventure. I hope that this point in the semester finds you battling your paragraphs with even more success.