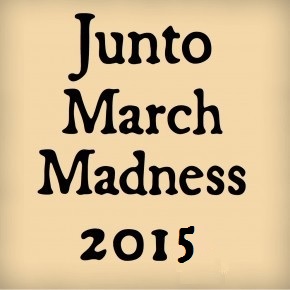 Jonathan Edwards and Thomas Paine clutched victory from the jaws of defeat by the slightest of margins. Benjamin Franklin is basically looking like this. And Harriet Jacobs and Frederick Douglass are heading for a slave narrative showdown.

There is a quick turnaround this week, so you have little time to catch your breath. Voting for the Elite Eight is tomorrow.

2. The Declaration of Independence 53% defeated 11. Frederick Douglass, “What to the Slave is the Fourth of July?” 47%

3. Toussaint Louverture, “Colonial Constitution of Saint Domingue” 38% is defeated by 15. Harriet Jacobs, Incidents in the Life of a Slave Girl 62%