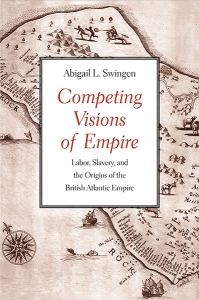 There have been some fantastic new contributions of late that explore connections between slavery, economics, and empire. In his 2008 analysis of the American political economy, economic historian Gavin Wright concluded that the dependence on slave labor came not because of any institutional efficiency on the part of plantations, but rather, that no other form of coerced labor could have been made to meet the labor demands. Sven Beckart’s Bancroft Prize-winning book, Empire of Cotton, analyzes connections between cotton, and the slave labor behind it, and the rise of modern capitalism. Ed Baptist’s book, The Half Has Never Been Told, explores slavery’s role in the making of American capitalism.

Abigail Swingen’s new book, Competing Visions of Empire, is no exception. Swingen begins her book with an exploration of English concerns about labor for militia rolls, plantations, and other ventures in their British West Indies in the mid-seventeenth century. Discussions about labor needs initially focused on indentured servitude and convict transportation as a viable (and coerced) means to fulfill these needs, as well as to address England’s expanding population.[1] Ultimately, these sources of coerced labor failed to meet demands, and African slavery became the primary source of unfree labor in the West Indies, and elsewhere in the English American colonies. “The triumph of African slavery in the colonies,” Swingen argues, “had as much to do with political, economic, and social concerns in England, as it did with labor demands in colonies.”[2]

The making of the political economy in England’s overseas empires ultimately meant negotiating the sometimes-competing agendas of the military, merchants, planters, colonial governments, and other figures in shaping imperial policies (which, as Swingen reminds us, were not static). Those involved tended to focus on “improvement,” meaning creating policies that expanded colonial resources, and by extent, national wealth.[3]

Swingen’s book comprises four key moments of administrative change for England and its empire. The first is the debate over England’s West Indian colonies under Oliver Cromwell’s administration. Those who are familiar with the history of the region will recognize the starting point of Swingen’s book, as coinciding with some critical points of English claims in what would become lucrative sugar producing colonies. The book begins a mere 30 years after the arrival of the first permanent English settlers in Barbados (1627), and contemporarily with the conquest of Jamaica from the Spanish (1655).[4] Bermuda similarly, was under control of the Virginia Company.

The book also explores visions of empire under the Restoration. Cromwell’s death created a political uncertainty that made West Indian planters anxious, particularly given Charles II’s initial promise to return Jamaica to the Spanish (a promise he defaulted on).[5] The Restoration saw royal charters assigned to two African companies, granting them monopolies on English slave trade in West Africa. The monopoly, which was criticized by a number of English merchants, was deemed necessary to counter international competition. It also asserted the King’s unilateral control over “all political, economic, diplomatic, and military concerns,” when it came to imperial policy.[6] Although it limited the number of English merchants who could participate in the African slave trade, it nonetheless forged closer ties between the English economy and slavery. By the 1670s, English involvement in the slave trade was acknowledged as “key to imperial success.”[7] From 1676 to 1750, the (estimated) number of slaves leaving Africa on English/British ships nearly doubled.[8]

Not surprisingly, the 1690s are another critical point as the Glorious Revolution gave way to a constitutional monarchy that by definition, no longer saw monarchical power as absolute. The Royal African Company saw the 1,000-year monopoly granted to them by King Charles II fade away. Free trade was asserted as an English right, and the English involvement in the slave trade expanded after 1688.[9] By 1680, blacks outnumbered whites in Barbados, the Leeward Islands, Jamaica, and the Chesapeake. In Jamaica, which had lucrative sugar plantations, the white population held relatively steady between 1700 and 1720, while the black population doubled.[10] Changes in imperial policy opened the transatlantic slave trade to broader participation, further entangling the British Atlantic political economy with the business of slavery.[11]

Swingen’s greatest contributions are firstly, the skill with which she integrates politics, economics, social concerns, and military history across a seventy-year stretch that represents a tumultuous and complex period in English (British) history. And she persuasively demonstrates that these facets, which are often treated separately, are in fact, interrelated. Secondly, with her primary focus on the seventeenth century, she makes an important contribution to a historiography that has frequently emphasized the role of slavery in the eighteenth and nineteenth century political economies. Thirdly, where many recent treatments of slavery have focused on conflicts over the morality of slavery (which is undeniably important), she ably demonstrates how the changing political climate of England (later Great Britain) and contestations over power shaped debates over slavery. It is ambitious ground to cover, but one that she executes admirably.

[1] Abigail L. Swingen, Competing Vision of Empire: Labor, Slavery, and the Origins of the British Atlantic Empire (New Haven: Yale University Press, 2015), 11-31. Note that I am using “England” and “English” to discuss the period before the 1707 Act of Union, and “Great Britain” and “British” thereafter.

[4] These plantations also received a significant number of coerced Irish laborers, as the result of Cromwell’s campaigns in Ireland (Eleven Years’ War and Wars of the Three Kingdoms). See Ibid., 15, 19-20, 34-5, 50, and Audrey Horning, Ireland in the Virginian Sea: Colonialism in the British Atlantic (Chapel Hill: University of North Carolina Press, 2013), 266.

[11] And contributing to what Ira Berlin described as the process of moving from societies with slaves to slave societies. Ira Berlin, Many Thousands Gone: The First Two Hundred Years of Slavery in North America (Cambridge: The Belknap Press of the Harvard University Press, 2000), 15-216.