Today’s guest post is a book review from Keith Grant, a PhD candidate in History at the University of New Brunswick, Canada. He is also the co-editor of Borealia, a new group blog on early Canadian history. We strongly encourage everyone to bookmark this new and exciting blog. 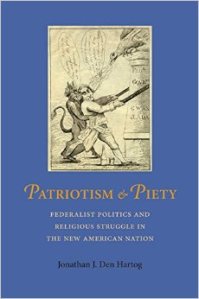 Religion was an “engine of politics” in the early American republic. Jonathan Den Hartog explains how religion energized (and then, ironically, diverted energy from) Federalist politics, and how the national vision of Federalists changed American religion. He considers northern evangelical Federalists such as John Jay (and his two sons), Caleb Strong, and Elias Boudinot, Unitarian Federalists including John Adams, and Federalists with a southern accent, Henry De Saussure and Charles Pinckney. These individuals are located, through impressive archival research, in a web of interpersonal relationships.

This volume joins recent books, such as those by Amanda Porterfield and Eric Schlereth, which examine the overlap of religious debate and political partisanship in the decades after the American Revolution.[1] Patriotism and Piety argues that the Federalist coordination of religion and politics changed over time, manifesting three successive approaches. A republican legacy of corporate religiosity emerged from the Revolutionary era, seeing religion as cultivating the virtue of citizens and the orderly character of the republic. Its language of Providence was capacious enough for cooperation among Protestants and circumspect Deists.

From the 1790s to about 1810, religion and politics were on a combative footing. One of the book’s signal contributions is to lay out in careful detail the religious roots of anxiety about “infidelity” during the period of the French Revolution. Den Hartog makes comprehensible the overheated, linked discourses of (religious) infidelity and (political) anti-Jacobinism. At their most extreme, Federalist clergy like Jedidiah Morse presaged Katy Perry in their worries about the Bavarian Illuminati; over against the Providential design for the republic was this diabolically-inspired scheme for its downfall. Such a theological interpretation of events—and not only political brinkmanship—explains the period’s fierce partisan rhetoric. The combative approach to religion also made the alliances of the earlier republican synthesis less tenable, accentuating theological differences and thereby contributing to divisions within the Federalist party.

A voluntarist relationship between politics and religion typified the period after 1812, and indeed Den Hartog convincingly demonstrates the prominence of Federalists in emerging voluntary religious associations. The legacy of such a change in direction was mixed. While the concern for Christian morality represented continuity with the Federalist vision, seeking such reform through non-political means diverted energy from the (already struggling) Federalist party. Yet the national vision that Federalists brought to voluntaristic religion had a profound influence on the course of American Christianity. Indeed, Den Hartog proposes this impulse as “the federalization of American Christianity.” “In pioneering religious voluntarism, these individuals took Federalist concepts about national bodies directing dispersed local activity to form national organizations in the same way that the U.S. Constitution shaped the practice of political federalism” (18). Perhaps the clearest example was Elias Boudinot’s prominent role in the formation of the American Bible Society, coordinating on a national level the work of local societies. While Nathan Hatch emphasized the populist, anti-authoritarian, and democratic qualities of new religious movements (many of which were aligned with Jeffersonian Democratic-Republicans), Federalists also made their mark on voluntary religion.[2]

Den Hartog also suggests that such “federalized” voluntary associations made a significant contribution to the national culture of the early republic, at a time when the federal government was relatively weak. The common religious culture and organizational lineaments of voluntary religious societies helped many Americans imagine themselves as participants in a common project. In this way, Patriotism and Piety might find a place on a reading list with, for example, David Waldstreicher’s In the Midst of Perpetual Fetes.[3] The book does not gloss over sectional differences, however. Federalists in the South retained a republican respect for Protestantism as an aspect of social order, but for the most part did not mix their religion with their politics.

Den Hartog demonstrates that in the decades after the First Amendment, religion remained an “engine of politics”—but just how it did so was continually contested. His case studies of prominent Federalists show how very integrated religious and political ideas were in the early republic. It remains an open question whether Federalists succeeded in doing on a national scale in the religious sphere what they could not in politics, or whether by the voluntarist turn they abandoned their comprehensive social vision.

[1] Amanda Porterfield, Conceived in Doubt: Religion and Politics in the New American Nation (Chicago: University of Chicago Press, 2012);  Eric R. Schlereth, An Age of Infidels: The Politics of Religious Controversy in the Early United States (Philadelphia: University of Pennsylvania Press, 2013).

[3] David Waldstreicher, In the Midst of Perpetual Fetes: The Making of American Nationalism 1776-1820 (Chapel Hill: University of North Carolina Press, 1997).