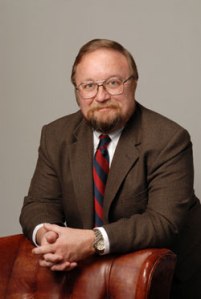 Daniel K. Richter is the Richard S. Dunn Director of the McNeil Center for Early American Studies and Roy F. and Jeannette P. Nichols Professor of American History at the University of Pennsylvania. Most recently, he has published Trade, Land, Power: The Struggle for Eastern North America. He has also written Before the Revolution: America’s Ancient Pasts, Facing East from Indian Country: A Native History of Early America, and The Ordeal of the Longhouse: The Peoples of the Iroquois League in the Era of European Colonization. He is currently researching English colonization during the Restoration era, for a book tentatively titled The Lords Proprietors: Feudal Dreams in English America, 1660-1689, under contract with Harvard University Press. Today he speaks with The Junto about teaching and directing the McNeil Center, and he offers advice for potential fellowship applicants.

JUNTO: You’ve taught in various places, from England to Pennsylvania. In what ways has your physical location influenced your approach to researching and writing the history of early America?

RICHTER: I have taught at various places, but I’ve lived in Pennsylvania for more than thirty years, fourteen at Dickinson College and now almost seventeen at Penn. (Just writing those words makes me feel old.) All that time in Penn’s Woods and the Quaker City has meant that I have returned repeatedly to Pennsylvania topics. Partly it was the availability of source materials, partly it was the interests of undergraduate students (I can’t count the number of research papers on the Carlisle Indian School I’ve supervised); partly it was getting drawn into active membership in the Pennsylvania Historical Association; partly it was invitations to speak to local  audiences about local topics. But mostly, I think, it was just curiosity about the communities I was living in, about the fabric of their built and social environments, and about how things came to be as they were. I suppose the briefer times I spent in New York City, Worcester, Williamsburg, Norwich, and Pasadena must have had a similar impact, because I remain fascinated with the origins of those places as well.

Yet here’s the main way the places I have taught have influenced my research and writing: they’ve tended to slow it down, and that’s a good thing. All those years at a liberal arts college led me to believe that my primary job was teaching and that research and writing were the great perks that my day job allowed me the luxury to do—and the luxury to take the time, mostly during summers—to get it right. Now, at a research university, I realize that many of my wonderful colleagues reverse those priorities, but something in me keeps reminding me that the day job comes first, that rushing things into print is not a good thing, and that research is fun, not a chore. Besides, directing the McNeil Center is a pretty good day job indeed. I get to hand out money to bright young people money and hang out with them for a year. What’s not to like?

JUNTO: During several of our conversations, you’ve sent me off to read a dissertation that one of your graduate students has completed—an act that has always made you seem quietly proud of your advisees. Could you say a little bit more about your approach to graduate mentoring?

RICHTER: I don’t really have any systematic thoughts about mentoring graduate students. In fact, I’m tempted just to repeat what I said about the joys of hanging out with bright young people. Of course there’s a lot more to it than that, but I’ve been fortunate to work with an extraordinarily talented group of students at Penn and to share the advising of those students with amazing mentors like Mike Zuckerman and Kathy Brown. My approach is generally to get out of the way and let folks follow their own paths. Which is not to say I don’t spend a lot of time with them. One of my favorite parts of the job (although I’m not sure my students would describe it that way) is the weekly meetings I have with students during the year leading up to their general exams. Each week, they work through a chunk of their reading lists, they propose some questions to discuss, and then we just chat for an hour. That’s when I really get to know them as intellectuals and human beings, and I hope the process builds the trust we need to get through the dissertation process and the job search. I really do back off when the dissertation phase kicks in, but I hope that all of my students know they can count on me for advice or a pep talk whenever and why-ever they need it. And that they also know I’m on their side even when I’m ruthlessly critiquing their writing.

JUNTO: What are some of your favorite topics, sources, articles, or books to teach, and why?

RICHTER: I do still love those wacky Puritans.

RICHTER: People keep giving me ties, and I keep wearing them until they have too many soup stains on them.

JUNTO: How did you come to be Director of the McNeil Center?

RICHTER: The astonishing Richard Dunn retired and left an amazing operation in place. At least one other person turned down the job. I got extremely lucky.

JUNTO: Can you describe the yearly cycle of the McNeil Center? What sorts of things are on your mind in August compared to May?

RICHTER: I once had a dean who liked to say that spring comes to college campuses in the fall, because that was when everything seemed hopeful and new. His maxim takes on a polysemic quality at the Center because the dissertation fellows who arrive in the fall are those who a committee labored for much of the previous spring to select and who met each other for the first time at our early May seminar and picnic. That same Friday marks the time when the former year’s fellows spring off to whatever is next. The May event is exhausting for me, at least. The advisory and executive councils and I have a full day of annual meetings before the 3:00 seminar, where we say hello and goodbye to the fellows’ classes and then get down to the real business of talking about a precirculated paper for two hours. Only after that can we picnic.

We have a similar celebration on the Friday after Labor Day to start the new yearly cycle. There are fewer meetings on that day than in the spring, and for the past decade we’ve enjoyed the delightful hospitality and lovely setting of the David Library of the American Revolution. Which also means that the new fellows and new Penn graduate students share the bonding experience of fighting the I-95 traffic to get there on time.

Those two events, in May and September, not only mark major passages in the year but, for me, epitomize what the McNeil Center is all about. Seventy-five or eighty people typically attend each event, so we can really see the extended Center community in action. The intellectual work of the seminar is always the primary order of business, and I suspect it is a bit of a shock for the new fellows when they see so many people taking the work so seriously. But it may be just as much of a shock to see how much fun we have around food and drink after the seminar is over. Young and not-so-young, graduate students, professors, and interested civilians—these are great people, and I feel fortunate to know all of them.

So what comes between September and May? Every Wednesday there is a brownbag session—one week open to the public with a precirculated paper, the next a closed session just for the fellows to talk about their own work. About three Fridays a month, the main seminar meets, with 40 or so deeply engaged attendees and, of course, a social hour and dinner to follow. Often, the presenter is a former fellow, helping the broader community to stay connected. The Friday seminar maintains a long tradition of travelling to various locations around the city (and occasionally farther afield). The tradition was born of necessity back in the days when the Center had no place of its own where the seminar could meet. We maintain this peripateticality because it brings to life the Consortium of libraries, universities, and colleges that support the Center and its intellectual community.

Two or three times a year, the Center hosts a major three-day conference, almost always in partnership with a Consortium institution. Once a month, there is an evening “salon” in someone’s living room. The intellectual feast never stops, and, somehow, all that stimulation only makes the fellows get more of their own work done.

We don’t completely stop in the summer, either. Every other Thursday, we have an informal talk, usually by a senior scholar, always followed by a buffet supper. There’s no home work—it’s summer, after all, but the community continues to gather, particularly welcoming visiting researchers working in local archives. Did I mention that the Center is all about intellectual community?

JUNTO: What advice would you give to graduate students and early career faculty as they prepare fellowship applications to submit to the McNeil Center?

RICHTER: First, just apply. The competition is stiff, but the payoff is worth it. In terms of the application itself, I have two pieces of advice. First, remember that your materials are being read by a purposely diverse committee of five people—junior and senior, historians and literary critics, seventeenth-century types and early republicanites. So, even though the field of Early American Studies may seem small (even under the Center’s capacious definition), you need to explain clearly to non-specialists why your work matters, and to whom. Second, make sure you are writing a proposal for a fellowship at the McNeil Center. By that I mean you should make sure that you don’t just explain why your project is earthshaking but why you need to come to the McNeil Center to bring it to fruition and what specifically you intend to do while you are here. Oh, and there is also the community thing . . . Don’t apply if you’re not willing to plunge wholeheartedly into that community and its give-and-take. If you do, like those eighty or so people who show up in May and September and the hundreds of people who read Amy Baxter’s weekly emails, you’ll never really leave.