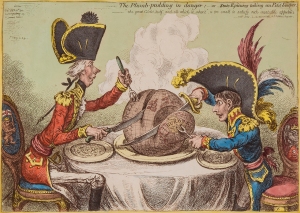 Revolutions: What are they good for?

The organizational concept of “The Age of Revolutions” has been on my mind a lot lately. First, I recently finished a full book manuscript that includes a version of that phrase in its title, so I’ve naturally been engaging with that literature quite a bit. Second, I’m preparing to teach a course titled “Eighteenth-Century Atlantic Revolutions: America, France, and Haiti” this semester, which will begin next week. And finally, I’ve had a review copy of Nathan Perl-Rosenthal’s excellent Citizen Sailors: Becoming American in the Age of Revolution (Harvard UP) sitting on my desk for a few months, struggling to come up with a more professional way to say “Go Out And Buy This Excellent Book Right Now.”

But a lot of these ideas that have been swirling around in my head finally came into clearer focus last weekend at the American Historical Association’s annual meeting. In Atlanta, there were a series of panels and workshops that investigated the progress of a once-thriving field. As David Bell noted in a post previewing one of these sessions, “the age of democratic revolutions” fell out of favor with the rise of cultural history and the emphasis on local contexts; it is tempting to ignore broader strokes of comparative analysis when delving into the richness of particular moments, movements, and events. But there have been enough works in recent years to see a resurgence of the field. (See here, here, and here, for a few examples.) So what marks this new turn in scholarship? What are some continuities from the previous generation of work, and what are new departures?

The first panel was “Revolutions: The State of the Field,” put together by Perl-Rosenthal and Bell. (Thanks to Jordan Taylor, you can read tweets about this panel here.) In this session, Perl-Rosenthal noted how a “hemispheric” perspective, which has taken prominence in recent years, differs from an “Atlantic” perspective of the Age of Revolutions. Building on the excellent work demonstrating the importance of the Caribbean during this period—the ever-present thorn in the side of previous works, especially RR Palmer’s—historians of the American revolutionary period have noted that they need not look across the ocean to witness important areas of intersection and comparison. By enmeshing America’s tale with that of Canada, the Caribbean, and the broader Latin America, several things happen: first, slavery is rightfully foregrounded; second, encounters with indigenous peoples are similarly emphasized; and third, abstract transnational politics are subordinated to transnational polities, which involves a much broader cast of characters. There were also great papers on the French, Chinese, and Arab Spring revolutions, all of which were fascinating and provoked much thought, but since this is an American history blog I’ll just refer you to the tweets.

On Saturday, there were a series of three consecutive panels that formed a workshop on “Rewriting Revolutions, 1750-1850: New Settings, Characters, and Plots,” which was an outgrowth of a previous workshop that took place a few years ago in California. Each session featured four provocative papers and lots of audience discussion. (You can read tweets on the panels, again helpfully put together by Jordan Taylor, here, here, and here.) A common theme throughout these papers were the quest to find tangible connections between various revolutionary contexts, whether it be people, objects, or ideas. It would be a disservice to try and capture all the brilliant nuances, so I’ll just highlight a few of the most provocative: Michael McDonnell on what soldiers’ memoirs tell us about how citizens made sense of the gritty realities of war; Kate Carté Engel noting how the Age of Revolutions period coincided with an expansion of evangelicalism, yet scholarship on the topic often ignores that very fact; Julia Gaffield arguing that the reason most scholars of the Haitian Revolution ignore the post-independence period because it disrupts the narrative of triumphant emancipation; Ashli White on how cockades were mass-produced and served as potent identity markers throughout different revolutionary contexts; and Steven Pincus on the different reaction of the British, French, and Spanish empires to the financial crisis of the 1760s, and how their various policies concerning austerity and extraction helped predicate the ensuing revolutionary moment.

Phew—I became exhausted just glancing over all my notes. I could list a lot more. But one of the common themes that stuck out to me is how each paper, in their own way, sought to demonstrate points of connection for citizens of revolutionary nations to the evolving polity that surrounded them. Evolving empires meant an evolution in imperial governance, and residents were left to make sense of their new world. These malleable intersections between citizen and state—whether material, political, geographic, sartorial, or any other tangible practice—are what made the Age of Revolutions real for residents.

Which brings me to Perl-Rosenthal’s book. In the most pragmatic way, Citizen Sailors is an example of how scholars can trace Atlantic connections through material objects—in this case, citizenship papers that were handed out by the American government to prove an official union between citizen and polity. In an era where nationality seemed to be in flux, and international recognition was a crucial element of the evolving global trade network, these sailors actually sought the extension of federal power through national identification documents. There are many paradoxes of this seemingly straight-forward development: it inaugurated a new form of citizenship that was both trenchantly national yet predicated on the international; it was radically inclusive in that it granted a point of access to citizenship for black sailors, yet was scaled back through the same methods that solidified the racially-segregated nature of early American politics; and most strikingly, while it validated federal control over private rights and public identification, it was sought after by private citizens who sought to enable personal, social, and economic mobility.

It was this last point that stuck out to me while reading the book, yet only in a hazy and abstract way until Perl-Rosenthal spoke directly to it during Saturday’s workshop. In response to an audience question about how today’s political context shapes our understanding of this age of disruption—it had been previously noted that scholars in the 1970s-80s held great hope in the democratic promise, and thus they exulted in the “democratic revolutions” under study—Perl-Rosenthal noted that historians have often been wary of extensive government involvement due to the distrust felt toward corrupted power. Using a Foucault model, these citizenship documents examined in Citizen Sailors could be seen as points of surveillance and tangible evidence of overreach and intrusion. Yet these authoritative papers were encouraged by the seaman because they enabled the maneuverability required in a world of extensive trade. Speaking from the Age of Obama—and this is where I came up with the cheeky title of this post—we can see how a government’s extensive foray into national boundaries and borders of belonging could serve the good of non-elites.

This last point might seem rather narrow and specialized for a post that attempts to talk about the broader historiographical contours of a rich filed like the Age of Revolutions. But I think its insights like these found in Perl-Rosenthal’s book that will seek to bridge the chasm between previous works on the “Age of Democratic Revolutions,” where ideas floated across the ocean and inaugurated an international and intellectual dialogue concerning rights and rebellions, and the regionalist works that emphasize the profound importance of local contexts. Ironically, the intersections between these two fields of work represent both the liminality of their conceptual borders as well as the importance of their particularities. In other words, what the new scholarship on the topic seems to demonstrate is the promise of grounding revolutionary elements through specific materials, people, and appropriations—the intersections between elite and common, ideal and reality. One way to do this is examine the interdependent relationship not only between different states of authority, but the evolving relationship between the various states and its citizens.

So what does it mean to study the “Age of Revolutions” while living in an “Age of Obama”? It obviously means a lot of things, but one of those is reconceptualizing a version of the state that recognizes the dynamic relationship between government and governed, an intimate and dialogic interchange that was both local in flavor but then often projected outward onto what appeared to be an infinite extension of global political unrest.