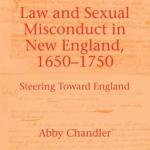 Between 1650 and 1750, the courts of Maine, Rhode Island, and Essex County, Massachusetts heard 1,843 cases concerning sexual misconduct. These suits, which concerned matters including rape, sodomy, adultery, and sex outside of marriage, are the subject of Abby Chandler’s new book, Law and Sexual Misconduct in New England, 1650-1750: Steering Toward England (Ashgate, 2015). By examining three jurisdictions not previously studied by historians of law and sexuality, Chandler complicates standard narratives of the extent to which New Englanders adhered to English law. She also engagingly reconstructs the familial and neighborhood conflicts that shaped individual cases.[1]

Chandler foregrounds questions of legal development rather than gendered power. Law and Sexual Misconduct most directly takes the “Anglicization” thesis advanced by John Murrin and others. From the first decades of the eighteenth century until the American Revolution, Murrin and others have argued, colonial courts increasingly imitated English law and procedures. Chandler contends that this process was less linear than scholars have previously suggested, and thus labels it “Alternating Anglicization” (1).[2]

As Chandler explains in her contextual first and second chapters, her analysis of three places underscores that New England did not follow a single path in its legal development. Whereas the Puritan founders of Massachusetts Bay, the colony on which Murrin based his analysis, at first rejected English legal codes and practices of lawyering, the religious dissenters of Rhode Island deliberately adopted English law from the outset. Maine, initially a disjointed scattering of outposts in the wilderness, was incorporated into Massachusetts beginning in the 1650s, leading to unusually abrupt changes in its legal system. After initially following English legal models, Maine rejected English law after joining Massachusetts, then participated in the same gradual Anglicization as Massachusetts.

Chandler further complicates the Anglicization thesis by emphasizing that “ordinary colonists” furthered legal change. Rather than taking a top-down approach that privileges government officials, Chandler insists that New Englanders “interacted with and responded to” Anglicization and thus “saw themselves as taking part in a much larger process” (3).

Some of Chandler’s most intriguing conclusions result from comparisons between the three jurisdictions. In her chapter on cross-cultural sexual contact, for instance, Chandler analyzes two sexual misconduct cases involving men on the margins of Maine society, one a recently-returned captive of the Abenakis and the other a transplant from Massachusetts. She suggests that, aware of the precariousness of their frontier society, Maine officials dealt more harshly with white men’s alleged crimes than did Essex County or Rhode Island.

Given the often terse and formulaic nature of colonial legal records, conclusions such as these are necessarily among Chandler’s most speculative. Only 199 of Chandler’s court cases contain anything besides a bare-bones listing of parties, allegations, and punishments (15). This sometimes means that, as in the discussion of Maine officials’ anxieties, Chandler is forced to draw distinctions between colonies based on relatively few cases. In addition, court records do not reveal the mindsets of jurors or judges, leaving historians to infer the reasons behind case outcomes or apparent differences in legal procedure.

At the same time as Chandler’s conclusions raise new questions for historians to bring to other source bases and kinds of legal cases, her work is an impressive feat of archival reconstruction. Research such as Chandler’s requires wading through many routine court cases in order find the relatively small number of well-documented ones. It also requires painstakingly reconstructing disputes and relationships using individual papers that comprise case files. Employing underutilized sources from Rhode Island, Maine, and Essex County, Law and Sexual Misconduct offers a valuable complement to existing scholarship on sexuality, legal development, and social relations in early New England.

[1] For two additional previews of Chandler’s book, see her guest post on The Junto and her interview with the podcast Ben Franklin’s World.